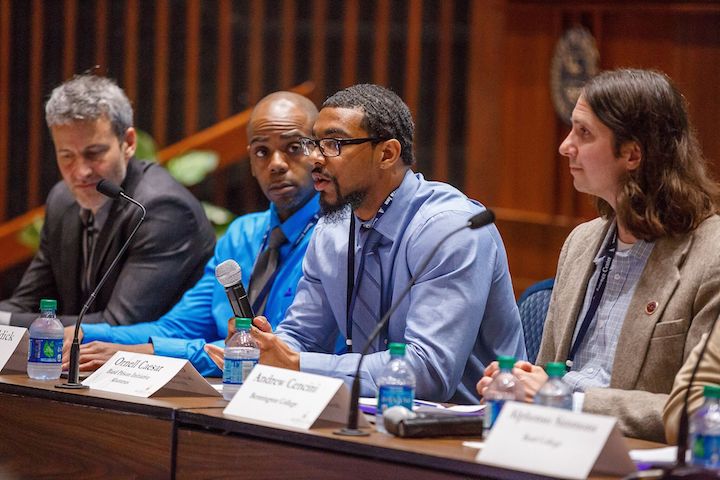 ANNANDALE-ON-HUDSON, N.Y.— The Bard Prison Initiative (BPI) led a convening of the Consortium for the Liberal Arts in Prison this April in South Bend, Indiana. The three-day event was hosted by the University of Notre Dame and Holy Cross College—partners in the Moreau College Initiative at Westville Correctional Facility and members of the Consortium since 2013. Launched in 2009, the Consortium draws together colleges and universities working to start, maintain, and expand college-in-prison programs across the country. The conference created opportunities for Consortium partners and participants, including college-in-prison graduates, to share ideas, strengthen networks, and develop plans for future work in the field. Discussion topics included innovation in and outside of the classroom, assessment data and research, postgraduate careers, and alumni advocacy and leadership.

In addition to current members, conference participants included prospective Consortium partners; University of Notre Dame and Holy Cross College faculty and administration; representatives from state departments of corrections; members of JustLeadershipUSA, the leading advocacy organization of formerly incarcerated people; and prominent supporters of education and prison reform. A highlight of the conference was a sneak peak of the forthcoming documentary College Behind Bars: the Bard Prison Initiative (working title), directed by award-winning filmmaker and co-director of The Vietnam War, Lynn Novick, and executive produced by Ken Burns.

The Consortium for the Liberal Arts in Prison is a nationwide network of colleges and universities committed to transforming the relationship between education and criminal justice in the United States. Drawing on BPI’s nearly two decades of experience, the Consortium offers strategic support, technical assistance, and critical guidance to institutes of higher education as they develop and sustain ambitious college-in-prison programs. It is currently active in 15 states. Together, partner institutions are challenging expectations of inclusive excellence while redefining the boundaries of success for people in and returning home from prison. “From the beginning, what impressed us is the fact that the intellectual life is at the heart of this endeavor,” says Michael Griffin, senior vice president at Holy Cross College. “The focus is on developing top-notch student-scholars, and it just turns out that some of the best prospects are incarcerated, so we bring the collegiate life to them.”

Since 2001, the Bard Prison Initiative has provided college opportunity inside the prisons of New York State. Begun as a pilot program with 15 students, BPI now enrolls 300 men and women inside three maximum-security prisons—Coxsackie, Eastern New York, and Green Haven—and three medium-security prisons—Fishkill, Taconic, and Woodbourne. In partnership with the government of the State of New York, Bard’s academic presence within the prison system has increased dramatically in breadth, depth, and scale: by the end of this year, the College will have awarded more than 500 degrees to students enrolled through the BPI. The Bard Prison Initiative challenges and expands our sense of community, and its success is a tribute to an extraordinary collaboration among the College, students, and government of the State of New York. For more information, visit: bpi.bard.edu.
#
Founded in 1860, Bard College is a four-year residential college of the liberal arts and sciences located 90 miles north of New York City. With the addition of the Montgomery Place estate, Bard’s campus consists of nearly 1,000 park-like acres in the Hudson River Valley. It offers bachelor of arts, bachelor of science, and bachelor of music degrees, with majors in more than 40 academic programs; graduate degrees in 12 programs; nine early colleges; and numerous dual-degree programs nationally and internationally. Building on its 157-year history as a competitive and innovative undergraduate institution, Bard College has expanded its mission as a private institution acting in the public interest across the country and around the world to meet broader student needs and increase access to liberal arts education. The undergraduate program at our main campus in upstate New York has a reputation for scholarly excellence, a focus on the arts, and civic engagement. Bard is committed to enriching culture, public life, and democratic discourse by training tomorrow’s thought leaders. For more information about Bard College, visit bard.edu.