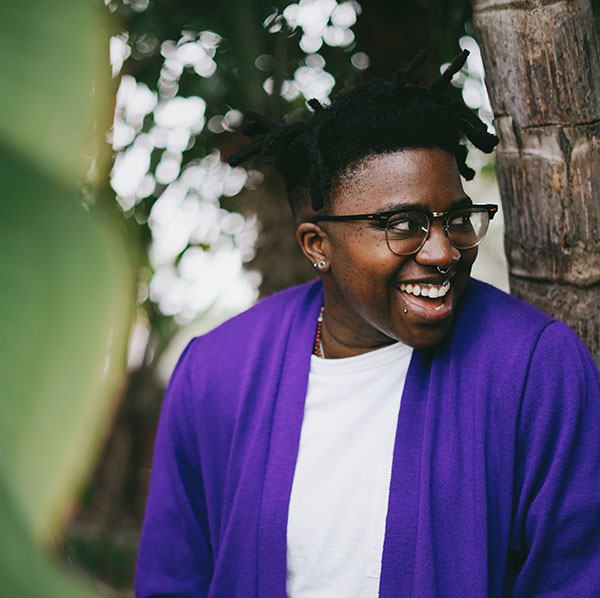 Annandale-on-Hudson, NY, May 2018 – The Center for Curatorial Studies, Bard College (CCS Bard) and the Human Rights Project at Bard College announced today that Tiona Nekkia McClodden has been selected as the fifth recipient of the Keith Haring Fellowship in Art and Activism.

Made possible through a five year-grant from the Keith Haring Foundation, the Haring Fellowship is an annual award for a scholar, activist, or artist to teach and conduct research in the Center for Curatorial Studies and the Human Rights Project at Bard College.

McClodden, an artist and curator, has looked critically at intersections of race, gender, sexuality and social commentary through an interdisciplinary practice that includes documentary film, experimental video, sculpture, and sound installation, over the last two decades. McClodden is the recipient of numerous awards and honors, among them the 2017 Louis Comfort Tiffany Foundation Award and the 2016 Pew Fellowship in the Arts in Philadelphia. She has exhibited her work at many venues internationally, including the Institute of Contemporary Art in Philadelphia, the Whitney Museum of American Art, MOCA LA, MCA Chicago, MOMA PS1, the Kansai Queer Film Festival in Osaka and Kyoto, Japan, and the London Lesbian and Gay Film Festival.  She was one of six American artists selected by CFC Media Lab, the National Film Board of Canada, and JustFilms/Ford Foundation for the inaugural "Open Immersion" project, fostering experiments with virtual reality storytelling around questions of inclusion and racial and social justice.

McClodden’s research at Bard College will continue her ongoing exploration of key black artists, the poets Essex Hemphill and Brad Johnson, and the composer Julius Eastman, all of whom produced influential but presently understudied works at the height of the AIDS epidemic. Her extensive notes, audio interviews, and ephemera on these artists, gathered amidst the absence of official archives or estates, will lead to a publication on their work.

McClodden is the curator of the exhibitions A Recollection and Predicated, both featured within Julius Eastman: That Which is Fundamental, shown in Philadelphia in May 2017 and in 2018 at The Kitchen in New York, where the black, gay minimalist composer and performer appeared many times before the end of his life. Her current performance installation, CLUB, explores what she calls "the liminal potential of night clubs, their ability to temporarily dissolve rules that govern our everyday lives and allow people from different backgrounds to interact more freely." It runs from May 3-26 at Performance Space 122 in Manhattan, the space in which Keith Haring had his first studio exhibition.

"Tiona Nekkia McClodden's work echoes the life and passions of Keith Haring, his raucous joy and fervent commitments," said Thomas Keenan, director of Bard's Human Rights Project. "For all of their archival richness, though, her projects are very much of the moment: pointed interventions in a world still marred by prejudice, discrimination, and violence."

McClodden will take up her one-year appointment in September 2018, and spend the spring semester of 2019 teaching at the College.  She succeeds the curator Galit Eilat, architects Alessandro Petti and Sandi Hilal, the artist and curator Shuddhabrata Sengupta, and the first recipient, artist Jeanne van Heeswijk.

About the Center for Curatorial Studies, Bard College and the Human Rights Project at Bard College

Bard College seeks to realize the best features of American liberal arts education, enabling individuals to think critically and act creatively based on a knowledge and understanding of human history, society, and the arts. Two pioneering programs developed under this mission are the Center for Curatorial Studies (CCS Bard) and the Human Rights Project.

CCS Bard was founded in 1990 as an exhibition and research center for the study of late twentieth-century and contemporary art and culture and to explore experimental approaches to the presentation of these topics and their impact on our world. Since 1994, the Center for Curatorial Studies and its graduate program have provided one of the world’s most forward thinking teaching and learning environments for the research and practice of contemporary art and curatorship. Broadly interdisciplinary, CCS Bard encourages students, faculty, and researchers to question the critical and political dimension of art, its mediation, and its social significance.


About the Keith Haring Foundation