The Archives & Special Collections Reading Room has reopened to researchers by appointment. If you wish to view any items from our non-circulating collections, please complete the following form.

The mission of the Bard College Archives & Special Collections is to collect, preserve and make available materials in a variety of formats relating to the intellectual and social history of Bard College and its surrounding communities. By offering online and physical access to its holdings, the Archives & Special Collections seeks to support the research and work of undergraduates, the greater Bard community, public historians, private researchers, and scholars worldwide.

The Bard College Archives & Special Collections documents the history of the College and the Hudson Valley through its collections, and preserves significant book collections to ensure their long term availability. This website serves to showcase some of the materials available for study, as well as to provide enhanced access to selected materials. Our collections fall into the following categories: College archives; Local and Regional History archives; Delafield Family/Montgomery Place archives; and Monographic Special Collections. Click around and be curious! Specific collections will be presented or described in the following pages. 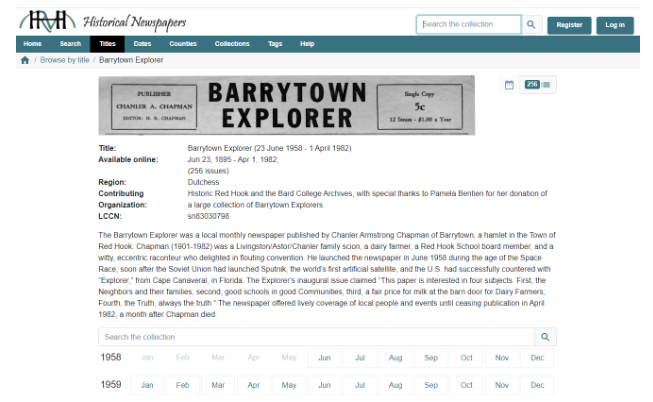 In our latest digitization efforts this year, we collaborated with Historic Red Hook to pool our holdings of the Barrytown Explorer, a local monthly newspaper published by Chanler Armstrong Chapman of Barrytown, a hamlet in the Town of Red Hook. Chapman (1901-1982) was a Livingston/Astor/Chanler family scion, a dairy farmer, a Red Hook School board member, and a witty, eccentric raconteur who delighted in flouting convention. He launched the newspaper in June 1958 during the age of the Space Race, soon after the Soviet Union had launched Sputnik, the world’s first artificial satellite, and the U.S. had successfully countered with “Explorer,” from Cape Canaveral, in Florida. The Explorer’s inaugural issue claimed “This paper is interested in four subjects. First, the Neighbors and their families; second, good schools in good Communities; third, a fair price for milk at the barn door for Dairy Farmers; Fourth, the Truth, always the truth.” The newspaper offered lively coverage of local people and events until ceasing publication in April 1982, a month after Chapman died.

We worked with SENYLRC to upload the combined scanned newspaper run (special thanks to our student workers for their painstaking work) to HRVH Newspapers ensuring that it is widely accessible and searchable.

We hope you enjoy perusing this entertaining collection!

We are excited to announce the launch of Friends of Stevenson Library (FOSL). To learn more about about this program, head to the FOSL website.

The Archives & Special Collections Reading Room has reopened to researchers by appointment. If you wish to view any items from our non-circulating collections, please complete the following form.

Gifts to the Archives

Do you have some St. Stephen’s or Bard memorabilia you would like to donate? The Bard Archives & Special Collections Department accepts donations of archival materials or books that fit into the many of the collections listed above. However, the Department will not accept donations of materials where ownership has not been transferred to the College. Given space and staffing limitations, all gifts for the Bard Archives must be approved by the Archivist, or other appropriate staff. We will be happy to start a discussion with you!