TŌN Presents Concerts at Carnegie Hall, Jazz at Lincoln Center’s Rose Theater, The Metropolitan Museum of Art, The Fisher Center at Bard, and Three Free Concerts in New York City and Beyond 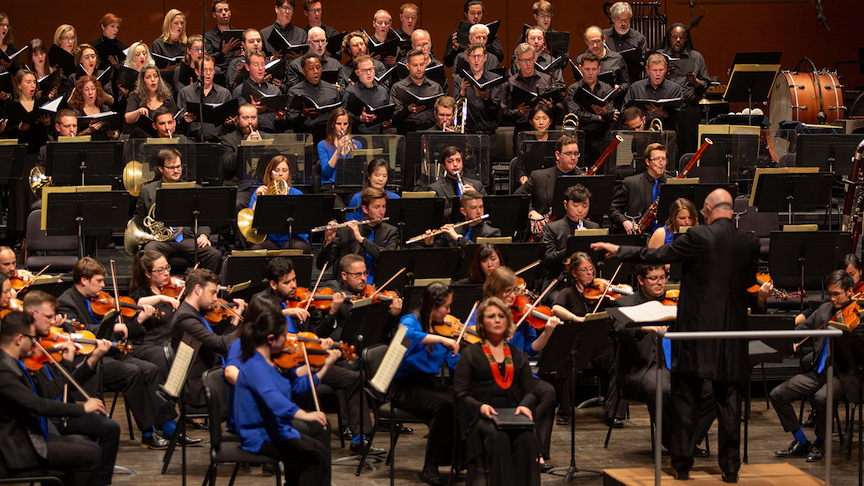 The Orchestra Now (TŌN), the visionary orchestra and master’s degree program founded by Bard College president, conductor, educator, and music historian Leon Botstein, returns to the stage for its seventh season on September 11. Four different series and three free concerts will offer 21 programs and 38 performances presenting inventive combinations of both established and less familiar repertoire through May 22, 2022.

The Orchestra welcomes 16 new members this season, for a total of 65 musicians from 13 countries. Since it launched in 2015, TŌN has performed 489 works by 234 composers in 35 venues for more than 66,000 live and virtual concertgoers, with 237 soloists and 22 conductors.

“Nothing can replace the exhilaration of live performance,” said Music Director Leon Botstein. “During the pandemic, our young musicians kept the music alive by developing the skills to produce and perform extraordinary digital programs. But the return to the stage and the excitement of a real audience in such wonderful venues is crucial to their experience. We are truly thrilled to resume a direct connection with our audiences.”

Highlights of the 2021-22 season include the world premieres of Brahmsiana by conductor/composer Leonard Slatkin—who makes his debut with TŌN this season (Sept. 18-19 at the Fisher Center)—and award-winning composer Scott Wheeler’s new work, written for violinist Gil Shaham, who performs it at both Carnegie Hall (Nov. 18) and the Fisher Center (Nov. 13-14). Also notable are seldom-heard performances of Dismal Swamp, William Grant Still’s portrait of enslaved people taking refuge while seeking freedom; and Karl Amadeus Hartmann’s Symphony No. 1, the composer’s response to conditions under the Nazi regime (May 7 at the Fisher Center and May 12 at Carnegie Hall), as well as Slatkin’s new arrangement of Ravel’s orchestration of Pictures at an Exhibition, which reinstates portions of Mussorgsky’s original composition for piano. The program also features Circuits by award-winning composer Cindy McTee, who is also Slatkin’s wife (Sept. 18-19 at the Fisher Center).

The eminent Carnegie Hall series includes rarely-heard works by Lutosławski, Perry, and Bristow in addition to Wheeler’s world premiere. Rose Theater at Jazz at Lincoln Center hosts a concert with guest conductor Carlos Miguel Prieto, Musical America’s 2019 Conductor of the Year. The top-selling Sight & Sound series at The Metropolitan Museum of Art returns to explore the connections between music and art in three programs focusing on Beethoven and Cristofori’s newly created piano, Stravinsky and Picasso, and Dvořák and Delacroix. The Fisher Center series at Bard College offers 18 concerts including special performances of Handel’s Messiah, Brahms’ German Requiem, and the TŌN debut of Leonard Slatkin conducting the world premiere of his Brahmsiana. Three FREE concerts will be offered, including two at Peter Norton Symphony Space in Manhattan led by TŌN’s resident conductor Zachary Schwartzman in works by Berlioz, Liszt, and Kodály, among others; and one with guest conductor Andrés Rivas in a program of Mozart, Schumann, and Dohnányi at Hudson Hall in Hudson, NY. The audience-pleasing programming of these free performances is a great opportunity for families to experience their first orchestral performance and attract future generations to the enjoyment of classical music.

Tickets priced at $25–$60 are available online at carnegiehall.org, by calling CarnegieCharge at 212.247.7800, or at the Carnegie Hall box office at 57th & Seventh Avenue. Ticket holders will need to comply with the venue’s health and safety requirements, which can be found here.

Tickets priced at $25–$50 are available online at jazz.org, by calling CenterCharge at 212.721.6500, or at the Jazz at Lincoln Center box office at Broadway & 60th, Ground Floor. Ticket holders will need to comply with the venue’s health and safety requirements, which can be found here.


SIGHT & SOUND SERIES AT THE METROPOLITAN MUSEUM OF ART
The Grace Rainey Rogers Auditorium
Conductor and music historian Leon Botstein surveys the parallels between orchestral music and the visual arts with three concerts in TŌN’s popular Sight & Sound series at The Metropolitan Museum of Art. This season explores the connections between Beethoven’s fascination with the emergence of the first piano; an interest in unconventional artistic and musical forms shared by Stravinsky and Picasso; and the European fascination with the peoples of the New World as expressed by MacDowell, Dvořák, and Delacroix. In each program, a discussion is accompanied by on-screen artworks and musical excerpts performed by the Orchestra, followed by a full performance and audience Q&A.

Beethoven, Cristofori & the Piano’s First Century
Sunday, December 5, 2021 at 2 PM
Leon Botstein, conductor
Shai Wosner, piano
Beethoven: Piano Concerto No. 5, Emperor, and Cristofori’s 1720 Grand Piano
At the dawn of the 18th century, Italian instrument maker Bartolomeo Cristofori created what would come to be known as the piano. A century later, it was clear that the instrument would become the defining instrument of Western musical culture. Beethoven’s “Emperor” Piano Concerto reveals the composer’s obsession with the musical possibilities emerging from the rapidly evolving technology of piano construction.

Cristofori’s 1720 Grand Piano is on view at The Metropolitan Museum of Art in the Musical Instruments collection.

Stravinsky, Picasso & Cubism
Sunday, February 20, 2022 at 2 PM
Leon Botstein, conductor
Blair McMillen, piano
Stravinsky: Concerto for Piano and Winds and Picasso’s Man with a Guitar
Upon settling in Paris in the 1920s, Igor Stravinsky formed close friendships with artists like Pablo Picasso, a founder of Cubism, which sought to deconstruct the familiar and reassemble reality through a disciplined, formal approach. The movement inspired Stravinsky to develop a new approach to the construction of musical forms. He loved to perform his Concerto for Piano and Wind Instruments, one of his earliest “neo-classic” masterpieces.

Picasso’s Man with a Guitar is on view at The Metropolitan Museum of Art in the Modern and Contemporary Art collection.

Dvořák, MacDowell & Delacroix: The New World
Sunday, April 10, 2022 at 2 PM
Leon Botstein, conductor
Edward MacDowell: Suite No. 2, Indian, Dvořák: New World Symphony, second movement, and Eugène Delacroix’s The Natchez
From their earliest encounters in the New World, Europeans were mesmerized by the indigenous peoples of North America. French artist Eugène Delacroix painted a Natchez family as they fled the massacre of their tribe up the Mississippi River. Edward MacDowell’s Indian Suite incorporated native melodies and rhythms, and the second movement of Antonín Dvořák’s New World Symphony was inspired by Longfellow’s poem on Hiawatha.

Eugène Delacroix’s The Natchez is on view at The Metropolitan Museum of Art in the 19th and Early 20th Century European Paintings and Sculpture collection.

Tickets priced at $30–$50; 3-concert series $75–$120; bring the kids for $1. All tickets include same-day museum admission. Tickets may be purchased online here, by calling The Met at 212.570.3949, or at The Great Hall box office at The Metropolitan Museum of Art. Ticket holders will need to comply with the venue’s health and safety requirements, which can be found here.

THE FISHER CENTER SERIES AT BARD, Sosnoff Theater
The Orchestra Now’s residency at Bard College’s Fisher Center renews with 18 concerts and nine different programs including special performances of Handel’s Messiah and the Brahms Requiem, and the debut of conductor Leonard Slatkin with TŌN.

Shostakovich & Dawson
Saturday September 11, 2021 at 8 PM
Sunday September 12, 2021 at 2 PM
Leon Botstein, conductor
William L. Dawson: Negro Folk Symphony
Shostakovich: Symphony No. 7, Leningrad
William L. Dawson said of his emotionally charged Negro Folk Symphony that he wanted listeners to know it was "unmistakably not the work of a white man." The work is paired with Shostakovich’s enormous and patriotic Seventh Symphony, Leningrad, written largely after he had fled the city following the German invasion during WWII.

Strauss’ Merry Pranks & Bruckner’s Fifth
Friday, October 1, 2021 at 8 PM
Saturday, October 2, 2021 at 5 PM
Leon Botstein, conductor
R. Strauss: Till Eulenspiegel’s Merry Pranks
Bruckner: Symphony No. 5
Richard Strauss’ audience favorite Till Eulenspiegel’s Merry Pranks, which chronicles the misadventures of the practical jokester and German peasant folk hero, is presented in contrast to Anton Bruckner’s massive Fifth Symphony, which was performed only once during the composer’s lifetime. He died having never heard it.

Joseph Young & Rachmaninoff
Saturday, April 23, 2022 at 8 PM
Sunday, April 24, 2022 at 2 PM
Joseph Young, conductor
Julia Perry: A Short Piece for Orchestra
Rachmaninoff: Symphony No. 3
Julia Perry’s riotous Short Work for Orchestra was recorded by the New York Philharmonic in 1965. While much of her work has been neglected, she was a winner of the Boulanger Grand Prix for her Viola Sonata. Rachmaninoff’s rhythmically expressive Symphony No. 3 concludes the program. Guest conductor Joseph Young, Music Director of the Berkeley Symphony and Resident Conductor of the National Youth Orchestra–USA at Carnegie Hall, leads the Orchestra.

FREE CONCERTS SERIES
TŌN continues its series of free concerts at venues in New York City and beyond, providing families with an opportunity to attend their first orchestral performance and introduce a new generation to classical music.


The Orchestra Now
The Orchestra Now (TŌN) is a group of 65 vibrant young musicians from 13 different countries across the globe: Canada, China, Colombia, Costa Rica, the Dominican Republic, Hungary, Indonesia, Israel, Korea, Mongolia, Peru, Taiwan, and the United States. All share a mission to make orchestral music relevant to 21st-century audiences by sharing their unique personal insights in a welcoming environment. Hand-picked from the world’s leading conservatories—including the Yale School of Music, Shanghai Conservatory of Music, Royal Academy of Music, and the Eastman School of Music—the members of TŌN are enlightening curious minds by giving on-stage introductions and demonstrations, writing concert notes from the musicians’ perspective, and having one-on-one discussions with patrons during intermissions.