A play without actors in which computer chatbots discuss human nature 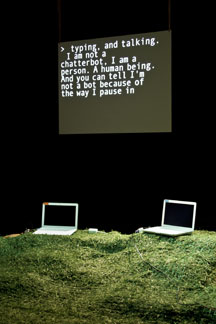 ANNANDALE-ON-HUDSON, N.Y. – Obie Award–winning director Annie Dorsen presents Hello Hi There, a witty and humorous play in which the actors are two laptop computers—or “chatter bots”—discussing human nature, in a conversation based on a famous debate between the philosopher Michel Foucault and linguist/activist Noam Chomsky. The performance takes place in the Fisher Center’s LUMA Theater, on Tuesday, November 27, at 6 and 8 p.m. The 6 p.m. program will be followed by a discussion with Annie Dorsen and Maria Cecire, coordinator of the Bard Experimental Humanities Program and assistant professor of literature. General admission is $20; $5 for Bard students. For more information call 845-758-7900 or go to fishercenter.bard.edu.

“Dorsen’s brilliantly conceived Hello Hi There pits two chatbots—robots without physical bodies—against each other in a highly ironic contest of wits … They chide and taunt, postulate definitions of intelligence and creativity, and even disparage theater people” (Village Voice). Every conversation between the chatbots forges a unique path due to their custom-made software, which has been programmed to mimic the nuances of human conversation. The result is an unexpected, uncanny, and humorous meditation on what separates humans from machines. Hello Hi There is a performance without people: a literal expression of posthumanism and simultaneously an examination of what it means to be human.

“I think the piece asks for an audience that wants to think about thinking,” says Dorsen. “The questions of the piece (what is a human, what’s the difference between language and thought, what constitutes a “useful” or “useless” idea, etc.) are pretty interesting to us humans. We tend to be curious about ourselves.”

Dorsen is in residence at Bard College, where she is currently teaching classes in theater. In September, as part of a residence in Live Arts Bard, she collaborated with an international team of designers and programmers along with performer Scott Shepherd to create False Peach, a computer play based on Hamlet, which has been commissioned by On the Boards (Seattle), BAM’s Next Wave Festival, and several European partners.

In 1971, Noam Chomsky and Michel Foucault were invited by Dutch philosopher Fons Edlers to participate in a televised debate. The topic was an age-old question: is there such a thing as “innate” human nature independent of our experiences and external influences.

What begins as a philosophical argument rooted in linguistics (Chomsky) and the theory of knowledge (Foucault) soon evolves into a broader discussion encompassing a wide range of topics, from science, history, and behaviorism to creativity, freedom, and the struggle for justice in the realm of politics.

Neither was satisfied with his own (or the other’s) performance, and it is generally regarded as a problematic and rather lackluster meeting. Nonetheless the debate offers a unique look at an exceptional meeting between two key thinkers of the 20th century – as well as, unintentionally, an example of the failure of dialogue to produce new understanding and new thought.
–      Annie Dorsen

Annie Dorsen works in a variety of fields, including theater, film, dance, and, as of 2010, digital performance. Most recently, Hello Hi There premiered at the steirischer herbst festival (Graz), and was presented at Black Box Teatre (Oslo), BIT Teatergarasjen (Bergen), Hebbel am Ufer (Berlin), and PS122 (New York). She is the cocreator of the 2008 Broadway musical Passing Strange, which she also directed. Spike Lee has since made a film of her production of the piece, which premiered at the Sundance Film Festival in 2009 was subsequently screened at South by Southwest Film Festival and Tribeca Film Festival, and was released theatrically by IFC in 2010 before being broadcast on PBS’s Great Performances. Also in 2010, she collaborated with choreographer Anne Juren on Magical (ImPulsTanz Festival Vienna, Side Step Festival Helsinki, Théâtre de la Cité International Paris, Kampnagel Hamburg, and others) and with Juren and DD Dorvillier on Pièce Sans Paroles (Brut Vienna and Rencontres Choréographiques Internationales Seine-Saint-Denis, Paris). In 2009 she created two music-theater pieces: Ask Your Mama, a setting of Langston Hughes’s 1962 poem, composed by Laura Karpman and sung by Jessye Norman and The Roots (Carnegie Hall), and ETHEL’s Truckstop, seen at the Brooklyn Academy of Music’s Next Wave Festival. Her pop-political performance project Democracy in America was presented at PS122 in spring 2009. Her short film, I Miss, originally the centerpiece of Democracy in America, screened at American Film Institute Festival (AFI Fest), SXSW Film Festival, the New York Film Festival’s “Views from the Avant-Garde,” and the Nantucket Film Festival. In addition to numerous awards for Passing Strange, Dorsen has received several fellowships, notably the Sir John Gielgud Fellowship from the Society of Stage Directors and Choreographers. She has taught at New York University and Fordham University, and is a graduate of the Yale School of Drama. www.anniedorsen.com

Live Arts Bard (LAB), Bard College’s new residency and commissioning program for the performing arts, is a laboratory where professional artists in theater, dance, and performance test ideas and develop new projects, many of which will be premiered at The Richard B. Fisher Center for the Performing Arts at Bard College. Each year, LAB will invite a number of leading artists and companies from the United States and abroad to Bard’s campus.

The Center for Curatorial Studies and Art in Contemporary Culture at Bard College (CCS Bard) is an exhibition and research center dedicated to the study of art and exhibition practices from the 1960s to the present day. Founded in 1990, the Center initiated its graduate program in curatorial studies in 1994.