Building Relationships Across Cultures: Austin Lehn ’17 at the State Department 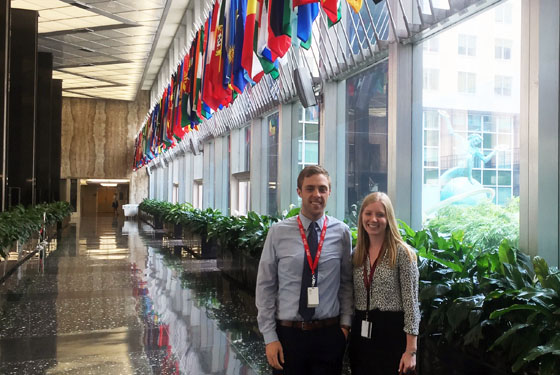 Austin and a fellow intern in the lobby of the State Department.
By Hannah Fassett ‘17

Austin Lehn’s interest in international relations started in high school, when he noticed a fellow student sitting alone at a cross-country practice. He walked over and introduced himself to the young man, who turned out to be a new foreign exchange student from Denmark named Mads. Later on, he would befriend another Danish student, Klara. Getting to know these two confirmed Austin’s sense that international students visiting Sehome High School in Bellingham, Washington, often had a hard time integrating with the local students. As a senior, he started a mentoring group where international students could get to know their American peers, meeting regularly to explore local hangouts, go to the movies, and spend time at the local coffee shop. The experience was enriching for everyone involved. Austin’s friendships with Mads and Klara have lasted through high school and college and included several visits to Denmark. He and Mads even went on a road trip from Seattle to New York City last year.

Austin’s desire to build relationships across cultures continued at Bard College, where he majors in political studies. As a junior, he had another opportunity to mentor international students with the Center for Civic Engagement, where he connected with two visiting students from Smolny College in Saint Petersburg and the American University of Cairo. He became curious about working in international education, so last spring he underwent a rigorous and competitive application process to become an intern at the United States Department of State in Washington, D.C. Austin won a Community Action Award from the Center for Civic Engagement to support his internship. He was offered a spot at EducationUSA, operated by the Bureau of Educational and Cultural Affairs, which runs the State Department’s network of international student adviser centers in nearly every country in the world. EducationUSA advisers help international students and their families navigate the college admission process in the United States. They also work with U.S. colleges to help recruit international students, and with foreign institutions and governments interested in connecting with U.S. colleges. EducationUSA exposed Austin broadly to the inner workings of the State Department. He attended grant proposal review panels and foreign officer country debriefings, and even met Secretary of State John Kerry. He worked on a project measuring the economic impact of international students, to see “how much money they bring into local economies when they come to the United States.” His main responsibility was helping to organize and oversee the EducationUSA Forum 2016, a three-day panel for international student recruiters and advisers. In addition to ensuring the panels went smoothly, Austin joined the events and made professional connections, particularly with advisers from Washington State. He hopes to become an international adviser to a university back home after graduation. “It’s where I belong,” he explains. He is also considering working at the State Department as a Foreign Service officer, another profession he’s encountered through EducationUSA.

Austin learned about the State Department internship through his academic adviser, James Ketterer, who mentored Austin through the application process. Ketterer, Bard’s dean of international studies and director of the Bard Globalization and International Affairs Program in New York City, taught Diplomacy Politics, one of Austin’s favorite courses at Bard, a course that gave him the “tools to know what to expect from the State Department.” Austin’s Senior Project will be a comparative politics study examining legislation for LGBTQ rights in Russia and Spain. After his summer at the State Department, Austin has ideas about education legislation in the United States, too. During the internship, he joined discussions on inclusivity in international recruitment and training Foreign Service workers on the importance of “having a diverse body of students represented in an exchange program.”

After his internship, what would Austin share with his fellow Bard students? “While being openly critical about the government is a good thing, the best way for young people to influence change within the government is to join it!” About his peers, he adds, “Bard brings together a group of students with a sincere desire to positively affect the world around us. Whether these changes come through a piece of inspiring art, a scientific discovery, or a research project, Bard students are committed to making an impact on the world around them. I have had so many enlightening conversations with my peers and truly believe that many of my friends here at Bard will become leaders in their respective fields.”