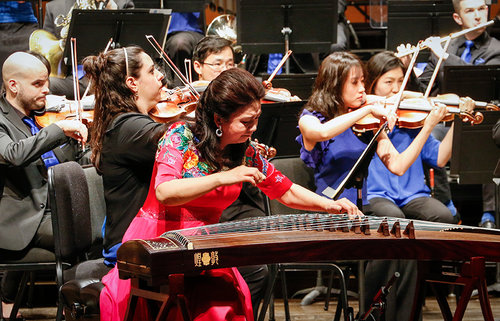 On Sunday, January 28, Bard’s Fisher Center for the Performing Arts hosted a celebratory concert to launch the Chinese Music Development Initiative, a groundbreaking new collaboration between the US-China Music Institute of the Bard College Conservatory of Music and the Central Conservatory of Music (in Beijing, China).

In a letter of welcome in the concert program, New York Governor Andrew Cuomo wrote, "This innovative collaboration will give both the East and the West new opportunities to learn, understand, and appreciate each other through the power of music."

In her speech at the concert, Zhang Qiyue, China's consul general in New York, remarked on how education in Western music has flourished in China, and yet very few students in the United States are familiar with traditional Chinese music. "That's why the partnership is so important as a milestone of the US-China exchanges in the culture and music fields," she said.

The Chinese Music Development Initiative was formally established at a signing ceremony in Beijing in December. This new initiative, managed by the US-China Music Institute of the Bard Conservatory, offers the first comprehensive program for the study and performance of Chinese music in the United States, consisting of several components: a degree program for Chinese instruments, an annual Chinese Music Festival, a program of scholarly conferences, and a summer academy for high school age students.

"This agreement is a milestone in Bard College’s international engagement," said Bard President Leon Botstein. "Our partnership with the Central Conservatory will result in deeper connections with China’s vibrant musical life and rich heritage."

"The Central Conservatory of Music and Bard Conservatory have taken the lead in opening the Chinese culture in foreign conservatories," said Central Conservatory President Yu Feng. "This innovative step has historical significance in the development of Chinese music in the West. Our cooperation with Bard College, one of the finest liberal arts colleges in America, with a rich history of 157 years, sends out a clear Chinese voice to the world that we have entered into a new cooperation mode and a new stage through the integration of music and culture exchanges," Yu added.

Bard Conservatory Director Robert Martin noted, "This is the culmination of years of work building relationships with the music world of China, including a tour of the Conservatory Orchestra to China in 2012. This agreement is a major achievement of our new US-China Music Institute, led by the distinguished conductor, author, and educator Jindong Cai, and a wonderful enrichment of the life of the Bard community."

Institute director Jindong Cai commented, "More than 400 years ago, the Italian Jesuit Matteo Ricci presented a Ming Dynasty emperor with a Western musical instrument, planting the seeds of Western music in China. Now we at Bard hope to make a similar contribution, deepening the development of Chinese music in the West. I am sure it will not take four centuries!"

The Initiative will be managed by a committee led by Jindong Cai and Hongmei Yu, with Hongzhu Liu, director of the Central Conservatory’s Office of Foreign Affairs, and Associate Director Frank Corliss of the Bard College Conservatory.

US-China Music Institute of the Bard College Conservatory of Music

Photography from World Journal (in Chinese)

Video from Sinovision (in Chinese)