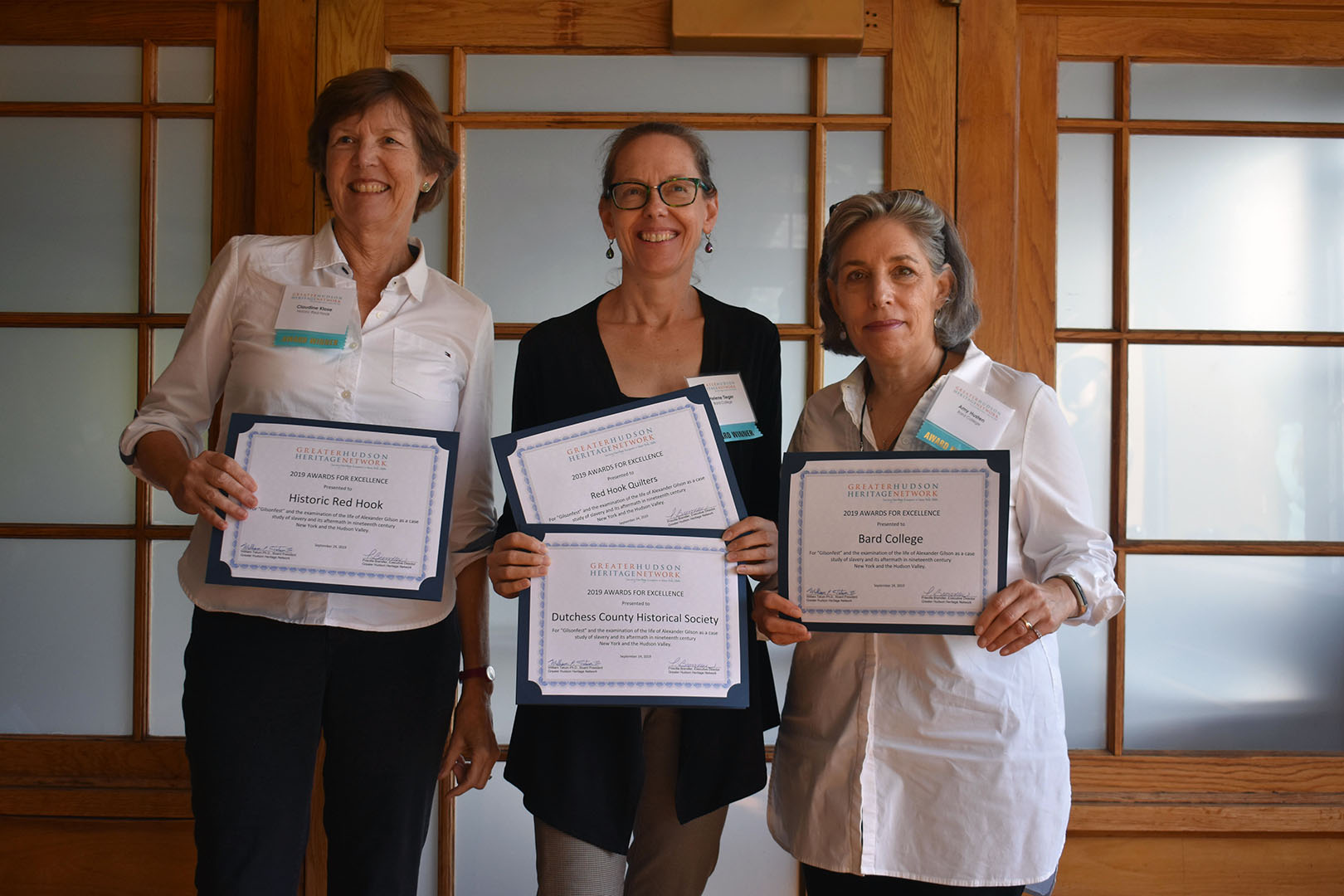 Claudine Klose, president of Historic Red Hook; Helene Tieger, Bard College archivist; and Amy Husten, managing director of Montgomery Place.
The Greater Hudson Heritage Network (GHHN) has announced Gilsonfest, a project of Bard College and Historic Red Hook, among the winners of its 2019 Awards for Excellence. The awards recognize and commend exceptional efforts among Hudson Valley heritage organizations. Awards are made to projects that exemplify creativity and professional vision resulting in a contribution to the preservation and interpretation of the historic scene, material culture, and diversity of the region. Gilsonfest is one of seven projects receiving awards this year.

Gilsonfest is a Bard College–led collaboration including Historic Red Hook, the Dutchess County Historical Society, and the Red Hook Quilters, funded by the Lumina Foundation, focusing on the life of Alexander Gilson (ca. 1824–1889). Gilson was an African American who labored for 50 years at Montgomery Place, an estate that utilized slave labor, eventually becoming the head gardener. Gilsonfest featured lectures, exhibitions at the Historic Red Hook Annex and Bard’s Montgomery Place Campus, new signage, a commissioned quilt, an artistic digital display, and a brochure. Bard students in Professor Myra Young Armstead’s spring 2019 course The Window at Montgomery Place, an Engaged Liberal Arts and Sciences offering, conducted historical research and assisted in developing the exhibition in partnership with local historians and Bard staff. Gilsonfest focused on and interpreted the life of Gilson, which allowed the project to illuminate the contributions of African Americans in 19th-century New York and the Hudson Valley, including the experiences of slaves, indentured servants, and free-born blacks.

The awards will be presented at GHHN’s Experimenting With History Annual Conference on Tuesday, September 24, at the Bear Mountain Inn and Conference Center, in Bear Mountain, N.Y. Awardees will also be featured in a poster session at the conference.

Details and More Awardees at GHHN