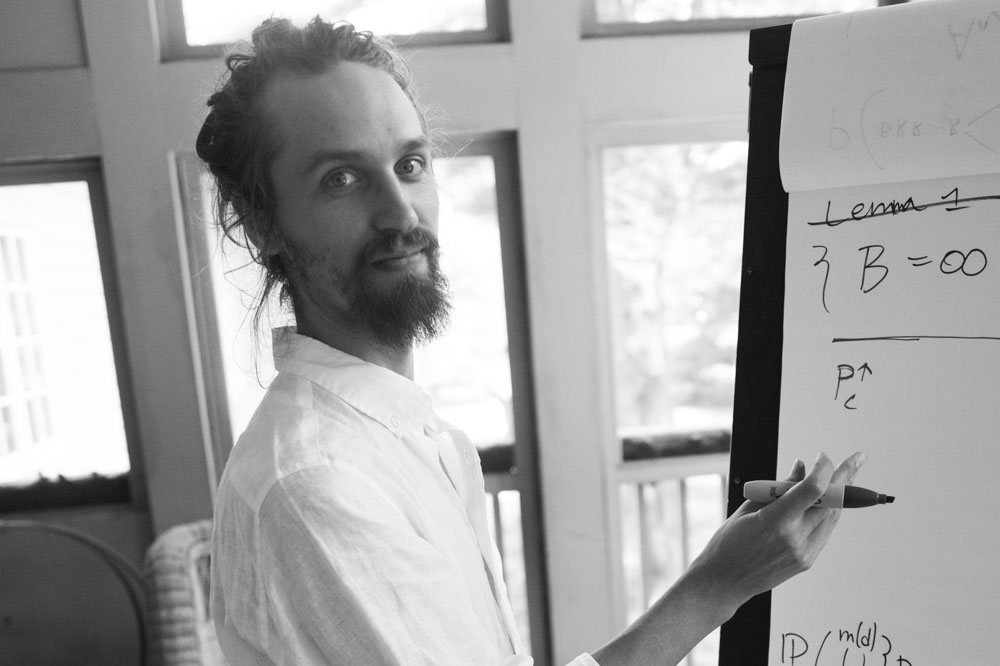 Photo courtesy of Professor Matthew Junge
Matthew Junge, Bard College Assistant Professor of Mathematics, has been awarded a grant from the National Science Foundation in the amount of $190,868 for research into multitype particle systems. The grant comes from the NSF's Division of Mathematical Sciences Probability Program.

Interacting particle systems with random dynamics are fundamental for modeling phenomena in the physical and social sciences. Such systems can be used to describe chemical reactions, as well as the spread of disease, information, and species through a network. These models often become more meaningful when multiple particle types are incorporated. For example, the celebrated First Passage Percolation model describes the spread of a single species through an environment; the incorporation of competing species enriches the model. This project seeks to study more realistic variants of well-known models for chemical reactions, epidemic outbreaks, and the spread of information as to deepen our understanding of important phenomena from across the sciences and further develop the mathematics that helps explain them. The project will involve the training of undergraduate students.

In summer 2020, Professor Junge will use a portion of the NSF grant to run a Tiny Mathematics Research Community at Bard that vertically connects undergraduates, graduates, postdoctoral researchers, and professors in a retreat-style research workshop.

Professor Junge joined the Bard faculty this fall, coming to Annandale from Duke University, where he served as William W. Elliott Research Assistant Professor of Mathematics. He received his doctorate in mathematics from the University of Washington, where he also earned MS, BS, and BA degrees.

His areas of interest include probability, statistical physics, and mathematical biology. Professor Junge’s research takes a probabilistic approach to particle systems from physics and biology, including models for chemical reactions, species proliferation, and epidemic outbreaks. He also studies random structures from classical mathematics and computer science, such as permutations and fragmented spaces.

This semester, he is teaching Probability and Calculus I, as well as supervising a research project with two Bard undergraduate students. He also teaches in the Bard Prison Initiative, alongside Mathematics Program colleagues John Cullinan and Japheth Wood.