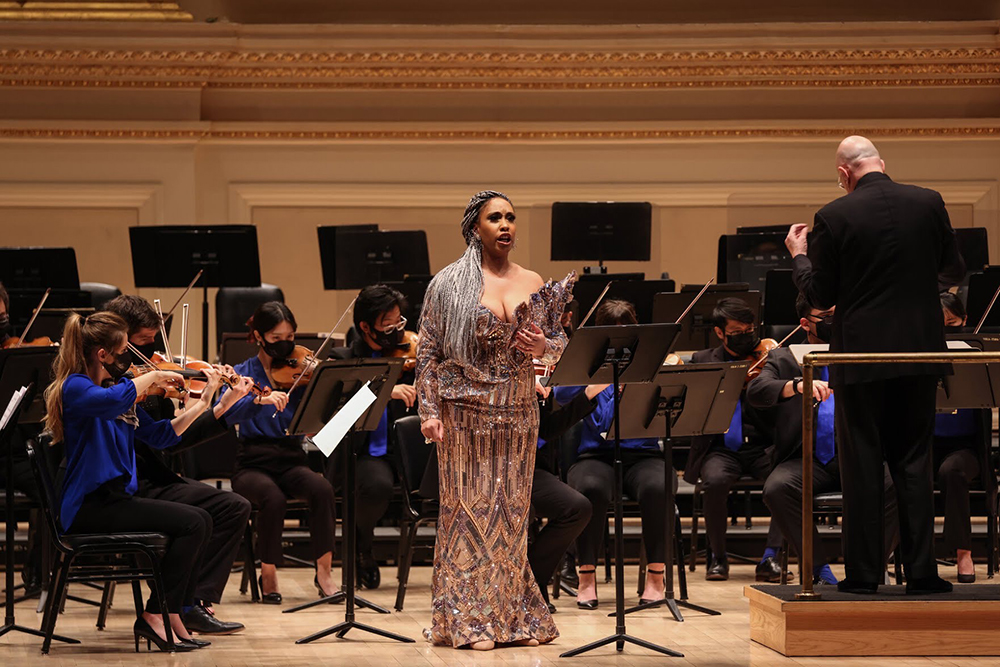 The mezzo-soprano Briana Hunter, front, singing in Julia Perry’s Stabat Mater with The Orchestra Now at Carnegie Hall. Photo by Caitlin Ochs for the New York Times.
At Carnegie Hall, President Leon Botstein and Bard graduate students of The Orchestra Now took an always-needed step in uncovering overlooked American classical music, writes Joshua Barone for the New York Times. “[T]he myopic approach of much orchestral programming today—Eurocentric, with living composers rarely given the same pride of place as a Beethoven or Mahler—is nothing new. Then there are artists like Leon Botstein, an indispensable advocate of the unfairly ignored, who brought his ensemble The Orchestra Now to Carnegie Hall on Thursday for an evening of works that, despite covering a range of nearly 150 years, felt as fresh as a batch of premieres.”

As part of TŌN’s Carnegie Hall concert series, Grammy Award-winning violinist and Bard Conservatory of Music faculty member Gil Shaham joined TŌN for the world premiere of a new concerto written for him by composer Scott Wheeler. Also on the program were Julia Perry’s 1951 Stabat Mater, and George Bristow’s complete Arcadian Symphony (1872), both of which were being performed at Carnegie Hall for the first time.

Read the review in the New York Times