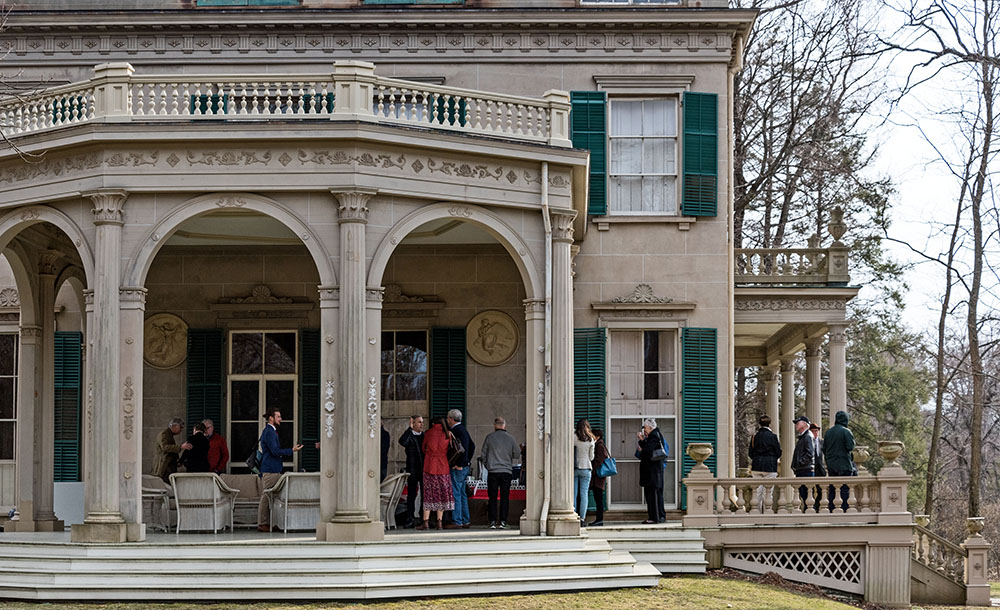 Bard College: The Montgomery Place Campus announces three spring series of events celebrating the history and arts of one of the Hudson Valley’s esteemed historic estates. Toward an Ethical Imagination: Gilsonfest, Spring Salon Series on Music of the Gilded Age, and The Gilded Garden: Historic Ornament in the Landscape at Montgomery Place are presented at Montgomery Place and locations in Red Hook, New York, beginning on Sunday, March 10 and culminating on Memorial Day weekend, May 24–27. Most of the events are free and open to the public. For reservations and more information go to bard.edu/montgomeryplace.

Toward an Ethical Imagination: Gilsonfest

Toward an Ethical Imagination: Gilsonfest is a collaboration between Bard College, Historic Red Hook, Dutchess County Historical Society, and Red Hook Quilters focusing on the life of Montgomery Place gardener Alexander Gilson, an African American slave, who after being freed stayed on as head gardener and eventually opened his own nursery business.

The program kicks off on Sunday, March 10 at 3 p.m. with a lecture, “A People’s History: Oral Histories and Inclusion,” by Susan Merriam, Associate Professor of Art History at Bard College, at the Elmendorph Inn, Red Hook, New York.

On Friday, May 24 at 11:30 am the program continues with the opening of an exhibition, Alexander Gilson: From Property to Property Owner, at the Historic Red Hook Annex, Cherry Street, Red Hook. It includes an exhibition by students in a Bard College class about Alexander Gilson, a quilting presentation by the Red Hook Quilters, and a presentation on historic garden artifacts and plants.

The program concludes on Sunday, May 26, at 2 pm with the lecture “History of Memorial Day” by Myra Young Armstead, Lyford Paterson Edwards and Helen Gray Edwards Professor of Historical Studies at Bard College. This will be presented at the Montgomery Place Coach House, followed by refreshments on the Mansion House north porch.

Events are free and open to the public and no registration is required. For more information, go to bard.edu/montgomeryplace.

Funding for Toward an Ethical Imagination: Gilsonfest is provided by The Lumina Foundation.

Spring Salon Series on Music of the Gilded Age

Hosted in partnership with Hudson River Heritage and coproduced and curated by Christopher Brellochs.

Saturday, May 11, 3 pm
Concert: “The Musical Life of Cora Livingston Barton and Her Husband Thomas Barton at Montgomery Place,” a recital with Christopher Brellochs, saxophone and Rita Costanzi, harp

Montgomery Place Mansion House Parlor. Admission: $25, limited to 40 seats. For more information and to purchase tickets for this event, please go to hudsonriverheritage.org.

Cora Livingston Barton and her husband Thomas Barton expanded the Montgomery Place estate to better capture the Romantic sensibilities of the time; music filled the house and the farming operations become more separated from the “pleasure gardens.” It was 1860 and the beginning of the Gilded Age; relatives such as Major General Richard Delafield, who was stationed at West Point, inspired the dedication of musical compositions such as “Florida March” and “Manassas March.” This performance will be a unique opportunity to hear these forgotten gems and experience music at Montgomery Place like Cora and Thomas did more than 150 years ago.

Saturday, May 18, 3 pm
Lecture: “Music of the Gilded Age in the Hudson Valley”
Montgomery Place Mansion House Parlor; tickets are $25. The concert is limited to 40 seats. For more information and to purchase tickets for this event, please go to hudsonriverheritage.org.

Dutchess Community College Associate Professor Christopher Brellochs, who has been presenting this beautiful music in authentic historical settings, will discuss the role and importance of music during the Hudson Valley Gilded Age.

Sunday, May 26 at 4 pm
“The Gardener of Montgomery Place and the Composer of Newburgh, New York,” an outdoor saxophone quartet performance
Montgomery Place North Porch; free and open to the public. Attendees are requested to bring their own lawn chairs and/or blankets. In the event of rain, the concert will take place in the historic Montgomery Place Coach House, and be limited to the first 50 attendees.

During the early 19th century, the gardener at Montgomery Place was an African American slave named Alexander Gilson, who, after being freed, stayed on to continue as head gardener. He eventually opened his own nursery business. Downriver in Newburgh, New York, composer Ulysses J. Alsdorf, whose grandfather was freed by the Manumission Act of New York State on July 4, 1827, had a similar life journey. The Alsdorfs were entrepreneurs, involved in everything from catering to dance schools, and became prominent citizens of the thriving Hudson Valley City of Newburgh. Ulysses J. Alsdorf’s music was used to celebrate the Newburgh portion of the 1909 Henry Hudson–Robert Fulton Celebration, when a steamboat traveled from Manhattan to Albany, stopping in Newburgh. His music will do the same for this event, 110 years later.

Funding for the Montgomery Place 2019 Spring Salon Series on Music of the Gilded Age is provided by Charles and Valerie Jacob.

The Gilded Garden: Historic Ornament in the Landscape at Montgomery Place

Friday, May 24, 4 pm
Opening will take place in the Ellipse Garden, located in front of the Greenhouse
The gardens at Montgomery Place once featured decorative garden ornaments and furniture alongside the living plants. During the mid-1800s, renowned architect Alexander Jackson Davis was hired to redesign the mansion as well as consult on the surrounding grounds. He introduced the property owners, Louise Livingston and her daughter Cora and son-in-law Thomas Barton, to landscape designer and writer Andrew Jackson Downing, who designed the gardens surrounding the jewel box–like conservatory directly across from the mansion. It was the style of the time to adorn the grounds with a lavish display of garden ornaments, including cast iron, terra-cotta, and marble objects. Displaying a wide-ranging mix of styles, these pieces were acquired from European and American manufacturers. Elaborate arbors and columnar supports of wirework held up climbing vines. Urns as large as 15 feet wide served as centerpieces for flower beds edged by elaborate rococo revival border tiles of terra-cotta. Many of the garden ornaments pictured in early photographs of the conservatory survive in the museum’s collection. The garden was considered a domestic space, allowing the confines of the home to extend into the landscape. The interior decoration of conservatories followed suit. Designed to be beautiful inside as well as outside, these glasshouses typically featured statuary, furniture, urns, potted plants, and hanging baskets. Program is free and open to the public.

Funding provided by the A. C. Israel Foundation and Plymouth Hill Foundation.

In conjunction with the above programs and Commencement activities, the Montgomery Place Mansion House will be open for viewing on Saturday, May 25 from 10:30 am to 1 pm and on Sunday, May 26 from 1:30 to 4 pm. For more information go to: bard.edu/montgomeryplace.

Bard College: The Montgomery Place Campus, a 380-acre estate adjacent to the main Bard College campus and overlooking the Hudson River, is a designated National Historic Landmark set amid rolling lawns, woodlands, and gardens, against the spectacular backdrop of the Catskill Mountains. Renowned architects, landscape designers, and horticulturists worked to create an elegant and inspiring country estate consisting of a mansion, farm, orchards, farmhouse, and other smaller buildings. The Montgomery Place estate was owned by members of the Livingston family from 1802 until the 1980s. In 1986, Livingston heir John Dennis Delafield transferred the estate to Historic Hudson Valley, in whose hands it remained until 2016, when Bard College acquired the property.