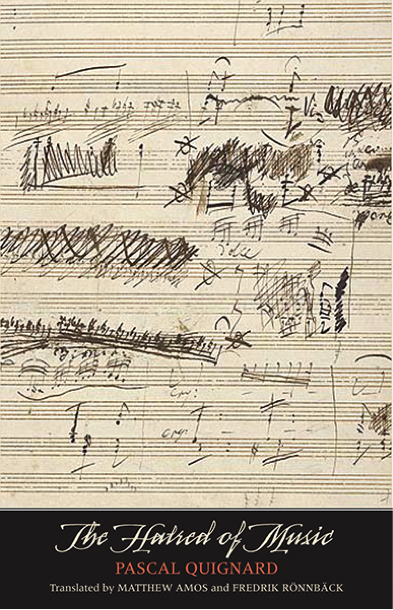 Pascal Quignard and the Translation of His Hatred of Music

"Vocal cords, lyre string, bowstring are a single string: entrails or nerves of a dead animal that emit the invisible sound that kills from afar."


In 1994, Pascal Quignard, who had just begun to enjoy considerable popular success as a novelist after having previously published numerous, quite esoteric essays and fragmentary texts, abruptly decided to renounce all of his professional activities: he stepped down as secretary general of literature at the illustrious Gallimard publishing house; he canceled the annual International Festival of Baroque Opera and Theater at Versailles that he had founded only four years earlier under the aegis of François Mitterrand; he distanced himself from the Concert des nations, which he had directed with Jordi Savall since 1990. He would no longer decide which authors to publish; he would no longer choose which songs to play, which forgotten masterpieces to unearth. He would do nothing but write. The Hatred of Music, originally published two years later, is a book that results from this rupture, but the title must not be misinterpreted. Quignard hints at the genealogy of the project in the following succinct formulation: “The expression Hatred of Music is meant to convey to what point music can become an object of hatred to someone who once adored it beyond measure.”

Come join a panel of respected scholars and the translators of The Hatred of Music on the occasion of the publication of the English translation of the book to learn more about the work of one of France’s most esteemed contemporary writers.