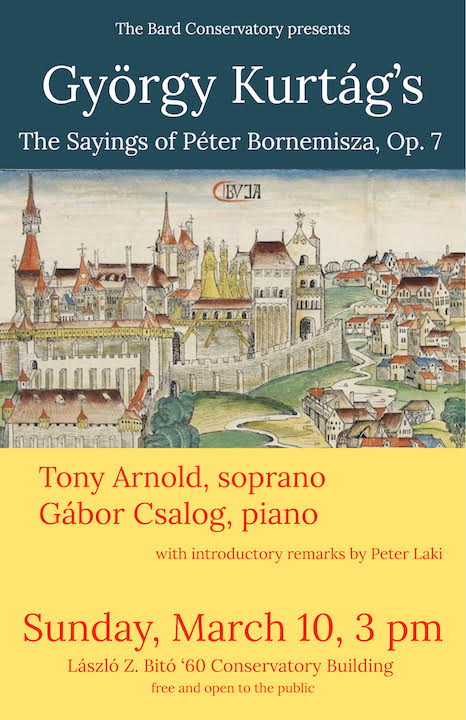 Sunday, March 10, 2019
Bitó Conservatory Building
3:00 pm – 5:00 pm EST/GMT-5
A short cycle of songs by Barber, Carter, Copland, and Ives, followed by a performance of The Sayings of Péter Bornemisza, with introductory remarks by Peter Laki, visiting associate professor of music.  The noted soprano Tony Arnold, a faculty member at the Peabody Conservatory and the Tanglewood Music Center with more than 30 discs of contemporary works to her credit, will be joined by Gábor Csalog, a distinguished Hungarian pianist and faculty member at the Liszt Academy in Budapest.

György Kurtág's (b. 1926)The Sayings of Péter Bornemisza, Op. 7, for soprano and piano (1963–-68) has been described as the most significant piece of music composed in Hungary since the death of Bartók in 1945. Péter Bornemisza was a persecuted reform preacher in sixteenth-century Hungary who wrote about moral duty, sin, fear and death. The cantata is divided into four sections: Confession, Sin, Death and Spring.

Free and open to the public.