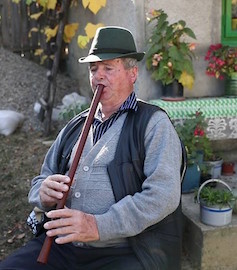 Blum Hall
2:00 pm – 4:00 pm EST/GMT-5
András Hodorog is the last living virtuoso among native Hungarian flute players in the Carpathian region. The “peasant flute” was once a widespread instrument in the villages of Hungary; during the 20th century, a number of collected field recordings immortalized thousands of flute melodies, including those that inspired the great Hungarian composers of the last century among them, Bartók and Kodály. A member of Moldva Region’s Hungarian minority, Hodorog has a performance style based on his extraordinarily wide palette of motivic fragments and melodic ornamentations, as well as his skill in combining these patterns in constantly changing ways.

Hodorog will be accompanied by: