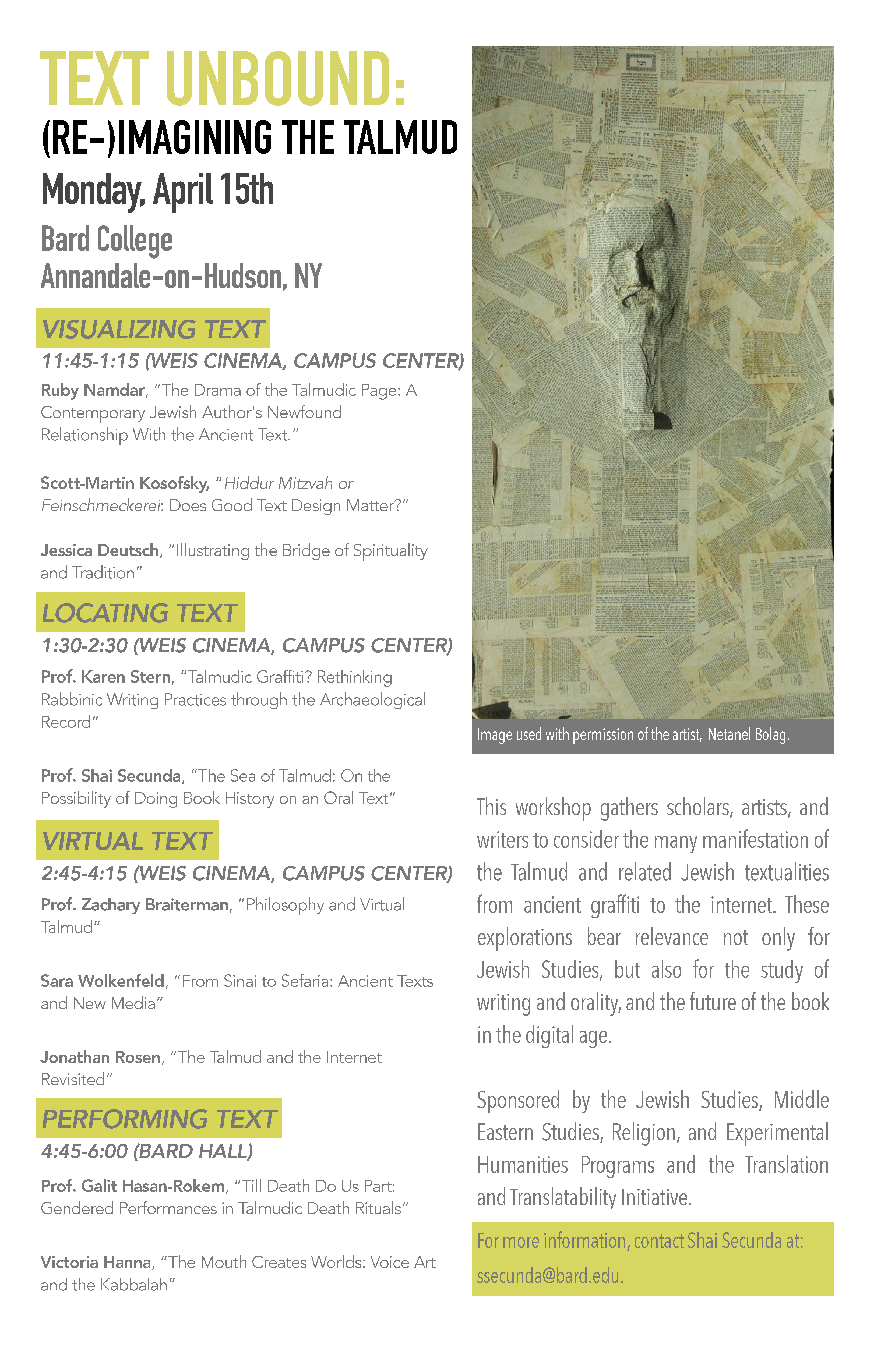 Judaism is often thought of as a religion of the book, and the most influential book in the Jewish canon is the Talmud—a famously complex, genre-defying text that has been at the center of Jewish life and learning since the Middle Ages. Nowadays, the Talmud is most often encountered in book form, typically in large tomes whose pages are imprinted with an iconic, typeset design. And yet the Talmud is considered to be the culmination of Judaism’s Oral Torah, and it was produced and originally transmitted orally by rabbis living in late antique Iraq.

This workshop will gather scholars, artists, a printer, a digitalist, and a performer to consider the many manifestations of this classical work and related Jewish textualities, from late antique graffiti and lament; to contemporary fiction, illustration, and printing; to the virtual universes of digitization and the internet, and experimental voice art. These explorations bear relevance not only for Jewish Studies, but also for broader matters such as the study of writing and orality, and the future of the book in the digital age.

Participants
Zachary Braiterman is professor of religion in the Department of Religion at Syracuse University.

Jessica Tamar Deutsch is a New York based artist. In 2017, she published The Illustrated Pirkei Avot: A Graphic Novel of Jewish Ethics.

Victoria Hanna is a Jerusalem based composer, creator, performer, researcher, and teacher of voice and language.

Galit Hasan-Rokem is a poet, translator, and Grunwald Professor of Folklore and Professor of Hebrew Literature (emerita) at The Hebrew University of Jerusalem.

Scott-Martin Kosofsky is an award-winning printer, book designer, and typography expert based in Rhinebeck.

Ruby Namdar is an Israeli novelist based in New York City. His novel The Ruined House (Harper, 2018) won the Sapir Prize, Israel’s most prestigious prize in Hebrew literature.

Jonathan Rosen is a writer and essayist, and wrote The Talmud and the Internet (Picador, 2000). He is the editorial director of Nextbook Press.

Karen B. Stern is associate professor of history at Brooklyn College of the City University of New York.