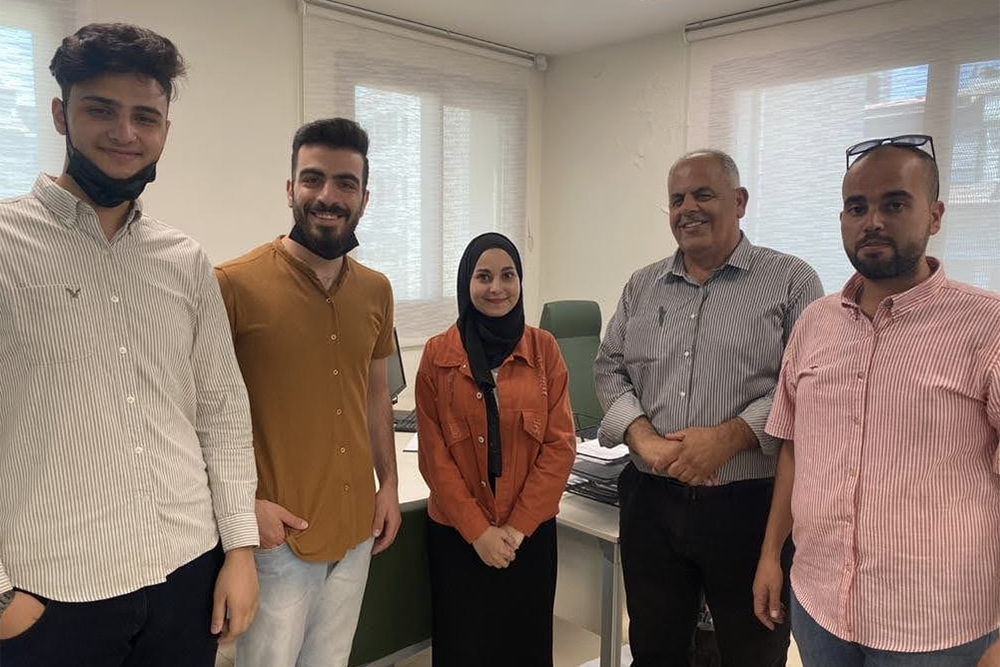 Ahmad Hijawi (left) and colleagues from CleanPalCo met officials from Ramallah Municipality in Palestine and later agreed to remove pollutants from the area for recycling and fabrication into construction materials.
When Al-Quds Bard student Ahmad Hijawi ’23 set out to find a way to tackle the problems of industrial stone waste and discarded tires in his native Palestine, he had no idea he would also wind up creating useful household products and winning national entrepreneurship competitions in the process. Hijawi credits much of his venture’s success to the skills he developed while taking OSUN’s network collaborative course on Social Entrepreneurship in 2020, as well as the valuable peer feedback he received throughout.

“The class had a great impact on helping me gain leadership and analytical skills, specifically in brainstorming solutions for the problems we wanted to tackle,” says Hijawi, who cofounded CleanPalCo. Hijawi found that the methodical research, experimentation, and consultation with classmates in different countries helped his team find a solution that was both viable and innovative. Ultimately, the course’s collaborative processes contributed to the team realizing they could chop up discarded rubber tires then combine them with polluting stone waste and water to produce useful household products such as bricks, tiles, and rubber flooring.

“We not only solved a pollution problem but also produced something useful that could serve as safety padding in parks and playgrounds,” he says.

Eliza Edge, who received a Bard MBA in Sustainability in 2020 and is one of several Bard College instructors teaching Social Entrepreneurship, agrees that the globally networked structure and the platform supporting the course were invaluable. “Getting comments and feedback from global peers can help others understand models that might already exist in other parts of the world,” she says. “Knowing that we don't want to recreate, say, a food delivery app everywhere in the world, our system allows us to share examples and ideas from our own lives and worldviews that can be very helpful for thinking outside of the box.”

In its second year, the course is connecting over 100 students from countries across the globe, including Bangladesh, Kenya, Kyrgyzstan, Taiwan, and the US, creating a brain trust of multicultural interactions that is not available in most classrooms.