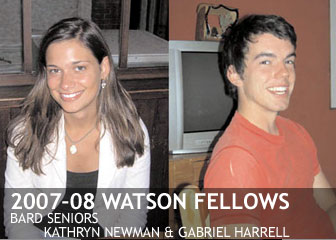 Bard College seniors Kathryn Newman and Gabriel Harrell have won prestigious Thomas J. Watson Fellowships for 2007-08, which provides $25,000 for a year of travel and exploration outside the United States.

ANNANDALE-ON-HUDSON, N.Y.—Two Bard College seniors—Gabriel Harrell and Kathryn Newman—have been awarded the prestigious Thomas J. Watson Foundation 2007–08 Fellowship, which provides for a year of travel and exploration outside the United States. “The awards are long-term investments in people, not research,” says Rosemary Macedo, executive director of the Watson Fellowship Program and a former Watson Fellow. “We look for people likely to lead or innovate in the future and give them extraordinary independence in pursuing their interests. They must have passion, creativity, and a feasible plan. The Watson Fellowship affords an unequaled opportunity for global experiential learning.” Each Watson Fellow receives a grant of $25,000 for a year of travel and independent study.

For his project, “Folk Puppetry: Performance and Craft in Agrarian and Religious Calendars in Greece, Turkey, Egypt, India, and Myanmar,” Gabriel Harrell will intern with puppetry and theatre troupes specializing in traditional performances centering around agricultural and religious rites. “I will follow one strain of shadow puppetry, known in Turkish as ‘Karagoz,’ from Greece through Turkey to Egypt, observing the ways in which this traditional form has been transferred across national, linguistic, religious, and cultural borders,” says Harrell. “I will then follow a style of string and rod puppetry from India to Myanmar. I hope to better understand national theatre movements anchored within popular or once-popular calendars, where theatre may be viewed as a technology (i.e., as a farming instrument) or an event pertaining to and structuring the passage of time.”

In Kathryn Newman’s project, “A Child’s World: The Cultural Exhibit in the Children’s Museum in Australia, United Arab Emirates, India, and Argentina,” she will conduct research, volunteering and co-curating at children’s museums in four major cities: Melbourne, Dubai, Delhi, and Buenos Aires. “The way that children are being educated in each of these places, and especially the way that they are introduced to other cultures, will shape the cross-cultural interactions of the future,” says Newman. “Children’s education is the most crucial site for the development of cultural knowledge, and therefore the children’s museum is a place where culture develops. Culture, in this sense, is produced through children, and in children’s museums one sees the development of a new citizen, as guided by adult values and ideas.”

Nearly 1,000 students from up to 50 selective private liberal arts colleges and universities apply for these awards each year. This year, 179 finalists competed on the national level, after their institutions nominated them in the autumn. The year of travel provides fellows an opportunity to test their aspirations and abilities and develop a more informed sense of international concern. More than 2,400 Watson Fellows have taken this challenging journey during the history of the program. They have gone on to become college presidents and professors, CEOs of major corporations, politicians, artists, lawyers, diplomats, doctors, journalists, and researchers.

The Thomas J. Watson Fellowship Program was begun in 1968 by the children of Thomas J. Watson Sr., the founder of International Business Machines (IBM) Corp., and his wife, Jeannette K. Watson, to honor their parents’ long-standing interest in education and world affairs. The Watson Foundation regards its investment in people as an effective contribution to the global community.

Since its inception almost 150 years ago, Bard College, located in Annandale-on-Hudson in New York State’s Dutchess County, has maintained a commitment to liberal arts and sciences education. It has done so by establishing a challenging academic program and fostering the interchange of ideas between a faculty of the highest caliber and an exemplary student body. This interaction is at the heart of classical education and serves as the cornerstone of a democratic civilization. Founded in 1860, Bard is a four-year residential college, offering the bachelor of arts degree with concentrations in approximately 50 academic programs in four divisions: Arts; Languages and Literature; Science, Mathematics, and Computing; and Social Studies. Bard has developed a new vision of the liberal arts college as a central body surrounded by significant institutes and programs that strengthen its curriculum. This model is distinctly different from the structure of a large university. While it is flexible enough to include programs for research, graduate study, community outreach, and other cultural and educational activities, the undergraduate program remains its focus. Each satellite program is designed to enhance the undergraduate course of study by offering students opportunities for interaction with leading artists and scholars.