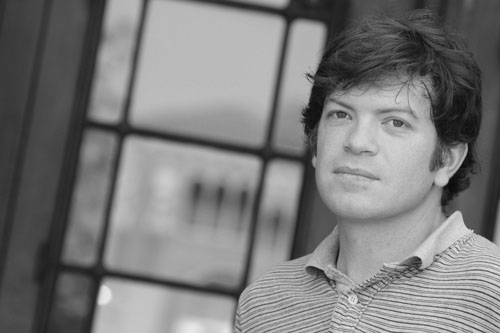 ANNANDALE-ON-HUDSON, N.Y.—Writer Salvador Plascencia has been selected to receive the annual Bard Fiction Prize for 2008. The prize, established in 2001 by Bard College to encourage and support promising young fiction writers, consists of a $30,000 cash award and appointment as writer in residence at the College for one semester. Plascencia is receiving this year’s Bard Fiction Prize for his first novel, The People of Paper (McSweeney’s, 2005). He will be writer in residence at Bard College for the spring 2008 semester, where he will continue his writing, meet informally with students, and give a public reading.

The Bard Fiction Prize committee writes, “Sal Plascencia’s debut novel, The People of Paper, is a novel of exceptional inventiveness and beauty, in which formal innovation lives side by side with extraordinary storytelling, enhancing rather than replacing emotional intensity. The categories of magic realism, postmodernism, or urban fabulism, while applicable, are utterly inadequate to describe this metafictional marvel, which takes us from Vatican City to Hollywood to Guadalajara and yet transcends time and place. From a uniquely porous species of paper, Plascencia creates, between Mexico and California, a membrane that is permeable and almost otherworldly. His novel is sensual, millennial, and mythological, and its imagination abounds with empathy.”

Part memoir, part lies, The People of Paper is about loving a woman made of paper and the wounds inflicted by first love and sharp objects. After his wife leaves him, Federico de la Fe and his daughter, Little Merced, depart the town of Las Tortugas, Mexico, and head for Los Angeles. There, with the aid of a local street gang and the prophetic powers of a baby Nostradamus, they engage in an epic battle to find a cure for sadness. Mechanical tortoises, disillusioned saints hiding in wrestling rings, a woman made of paper, and Rita Hayworth are a few of the players whose destinies intertwine in this story of war and lost love. The novel’s unique layout features columns of text running in different directions across the page, blacked-out sections, and a name that has literally been cut out of the book.

Salvador Plascencia received a B.A. from Whittier College and an M.F.A. in creative writing from Syracuse University. The People of Paper has been translated into over half a dozen languages. Plascencia’s short stories and reviews have also appeared in Los Angeles Times, Tin House, and McSweeney’s. Formerly an assistant lecturer at the University of Southern California, Plascencia is a native of El Monte, California.

The creation of the Bard Fiction Prize, presented each October, continues Bard’s long-standing position as a center for creative, groundbreaking literary work by both faculty and students. From Saul Bellow, William Gaddis, Mary McCarthy, and Ralph Ellison to John Ashbery, Philip Roth, William Weaver, and Chinua Achebe, Bard’s literature faculty, past and present, represents some of the most important American writers of our time. The prize is intended to encourage and support young writers of fiction to pursue their creative goals and provide an opportunity to work in a fertile and intellectual environment. Last year’s Bard Fiction Prize was awarded to writer Peter Orner for his first novel, set in Namibia, The Second Coming of Mavala Shikongo (Little, Brown and Company, 2006).

The Bard Fiction Prize is awarded to a promising, emerging writer who is an American citizen aged 39 years or younger at the time of application. In addition to the monetary award, the winner receives an appointment as writer in residence at Bard College for one semester, without the expectation that he or she teach traditional courses. The recipient gives at least one public lecture and meets informally with students. To apply, candidates should write a cover letter explaining the project they plan to work on while at Bard and submit a C.V., along with three copies of the published book they feel best represents their work. No manuscripts will be accepted. Applications for the 2009 prize must be received by July 15, 2008. For information about the Bard Fiction Prize, call 845-758-7087, send an e-mail to bfp@bard.edu, or visit www.bard.edu/bfp. Applicants may also request information by writing to the Bard Fiction Prize, Bard College, Annandale-on-Hudson, NY 12504-5000.