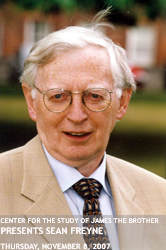 RENOWNED BIBLICAL SCHOLAR SEAN FREYNE SPEAKS ABOUT “RETRIEVING JAMES/YAKOV, THE BROTHER OF THE LORD: FROM LEGEND TO HISTORY,” AT THE INAUGURAL LECTURE OF THE CENTER FOR JAMES AT BARD COLLEGE

ANNANDALE-ON-HUDSON, N.Y.—The Center for the Study of James the Brother at Bard College presents a lecture by renowned biblical scholar Sean Freyne on Thursday, November 8. Free and open to the public, “Retrieving James/Yakov, the Brother of the Lord: From Legend to History,” begins at 4:00 p.m. in the Weis Cinema of the Bertelsmann Campus Center. A complimentary tea precedes the lecture at 3:30 p.m.

This program is presented as the inaugural lecture of the Center for the Study of James the Brother at Bard College, part of the Institute of Advanced Theology (IAT) at Bard College. The Center was founded at Bard by Frank T. Crohn and the Crohn Family Foundation to address a critical period in the study of both Judaism and Christianity: the thirty years between 32 C.E. and 62 C.E., when the Jesus movement was directed from the Temple in Jerusalem by James, the brother of Jesus.

The idea for the Center originated from a series of scholarly consultations on James, presented by the IAT, which examined why James, who was revered by both Jews and Jesus’ followers of the first century, has been virtually ignored since. As a result of the IAT consultations, research, and publications, James has been rediscovered both as the principal founder of what came to be called Christianity, and as a man venerated by his Jewish contemporaries in Jerusalem. “To the best of our knowledge, this is the first center dedicated to the study of James,” says Crohn, managing director of the Center.

“The existence of Jesus’ four brothers, of whom James was the eldest, is obviously inconvenient for those who believe that Mary was a virgin both before and after Jesus’ birth,” says Bruce Chilton, Bernard Iddings Bell Professor of Philosophy and Religion, executive director of the Institute of Advanced Theology and Center for James at Bard. “The prominence of James as the first leader of the early Christian movement comes as an embarrassment to those who see Peter in that role. But the reality that Jesus had a brother, and that James was his successor in Jerusalem, has been well established in critical scholarship. The Center is striving to make the hard data and critical interpretation of this research better known, and to explore James’s significance for Jewish-Christian relations in the 21st century.”

Freyne’s lecture examines the historical background of the James’s legends and suggests a context in which to “understand the historical James and his group as representatives for the Jesus movement, namely, that of the ‘servants of Zion.’” He concludes by addressing the significance of the retrieval of James/Yakov for contemporary Christian theology and history.


“Professor Freyne’s exploration is enlightening for our present understanding of James and the future work of the Center, and the issues that need to be confronted for progress to be made,” says Chilton. “He is internationally recognized for his expertise in the study of the New Testament, and particularly the origins of Christianity, using archaeological findings and historical sources.” Chilton adds that Freyne’s “careful, critical study of Jesus has put the emphasis back on the importance and influence of the Jewish environment in Galilee, with the result that genuinely historical work has been pursued on the basis of fresh evidence and the coordinated consideration of ancient sources. He is in an ideal position to assess the evidence concerning James, the brother of Jesus.”

Sean Freyne, visiting professor of early Christian history and literature at Harvard University, is director of the Programme for Mediterranean and Near Eastern Studies at Trinity College, Dublin, where he previously held the chair of theology. His early training in biblical studies was in Rome and Jerusalem (Pontifical Biblical Institute) and Tübingen (Institut für Antikes Judentum und Hellenistische Religionsgeschichte), where he was an Alexander von Humboldt Fellow. He has held teaching positions in New Testament in Ireland, the United States, and Australia, and is a frequent contributor to radio and television discussions dealing with historical and theological aspects of Christianity. He is also a trustee of the Chester Beatty Library and Gallery of Oriental Art, Dublin. He has served on the editorial boards of New Testament Studies and Concilium: An International Journal of Theology; and he is the past president (2006/07) of the Studiorum Novi Testamenti Societas. He is the author of several books and many articles dealing with various aspects of early Christianity and its literature, mainly the Gospels. His special research interest concerns Galilee in Hellenistic and Roman times, with a focus on the use of archaeology in constructing ancient history. His most recent study, Jesus, a Jewish Galilean (2004), gathers together many of his ideas on both Jesus and Galilee developed over the years.

For those unable to attend the lecture at the College, it is available via a live webcast, followed by a question-and-answer session with Freyne at www.bard.edu/jamescenter.

For further information, call the Center for the Study of James the Brother at 845-752-2020, e-mail centerforjames@bard.edu, or visit www.bard.edu/jamescenter.

The Institute of Advanced Theology was established to foster the kind of critical understanding, based on scholarship, that would make true religious pluralism possible. Since its inception in 1996, the Institute’s work has focused on how religions influence history, society, and other religions, and are in turn influenced by them. The Institute gratefully acknowledges support from members of the Institute, the Crohn Family Trust, and Tisch Family Foundation, as well as grants from The Levy Economics Institute and Bard College. For further information, call 845-758-7279, e-mail iat@bard.edu, or visit www.bard.edu/iat.

Editor's Note: To download a high-resolution press photo of Sean Freyne, click on the thumbnail image link below: