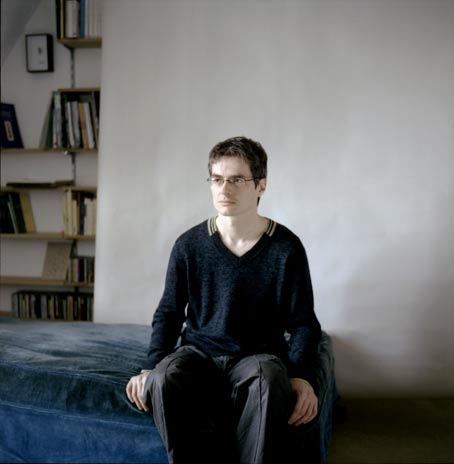 ANNANDALE-ON-HUDSON, N.Y.—The John Ashbery Poetry Series at Bard College presents “A Conversation with Pierre Alferi,” with Professor Eric Trudel, on Tuesday September 14, at 5 p.m. The program, which is also sponsored by the French Studies and Human Rights Programs and the Division of Languages and Literature, is free and open to the public and will be held on the Bard College campus in Olin 102.

On Wednesday, September 15, Pierre Alferi will read his work in French, with Bard poets reading translations in English. The reading is free and open to the public and begins at 6 p.m. in Weis Cinema in the Bertelsmann Campus Center.

From Monday, September 13 through Thursday, September 16, Alferi’s cinematic work, the Films Parlants and Cinépoèmes, will be shown, in loop, in the small seminar room of the Center for Curatorial Studies and Art in Contemporary Culture at Bard College (CCS). The films are open to the public during the hours of 1–5 p.m.  Additional information is provided at the entrance to CCS.

Pierre Alferi is a French novelist, poet, and essayist, born in 1963 in France, and currently living in Paris. He earned a degree in philosophy at the University of Paris and published his thesis on William of Ockham (Guillaume d’Ockham) in 1989. In 1991, he published another essay on questions of language and literature, Chercher une phrase. He has since published several books of poetry, including Les Allures naturelles (1991), Le Chemin familier du poisson combatif (1992), Kub Or (1994), Sentimentale journée (1997), and La Voie des airs (2004), as well as the novels Fmn (1994), Le cinéma des familles (1999), Les Jumelles (2009) and most recently Après vous (2010). Alferi nurtures collaboration with other artists and often performs with musicians, painters, and other poets. With Suzanne Doppelt, a photographer and professor at the European Graduate School, he cofounded the literary review Détail, and with Olivier Cadio La Revue de Littérature Générale. His collaboration with the sculptor Jacques Julien led to the production of the DVD Ça commence à Séoul (2007). Alferi has also written lyrics for the actress and singer Jeanne Balibar. Alferi is well-known for his translations of works by John Donne, Giorgio Agamben, and Meyer Schapiro into French. Alferi is also the author of experimental “films” and “cinépoems” in the tradition of Man Ray. His creativity on film was edited and published as a DVD, Cinépoèmes & films parlants (2003). Alferi is professor of visual studies at the Académie des Beaux-Arts in Lyon (France).