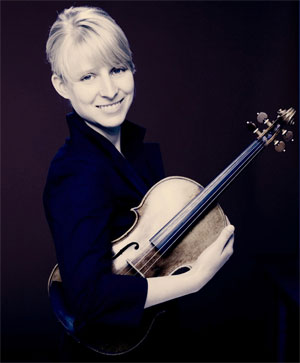 Violinist and Violist Helena Baillie Appointed as First Artist-Fellow
ANNANDALE-ON-HUDSON, N.Y.—The Bard College Conservatory of Music has received funding from The Lewis Foundation, Inc., to create a new Artist-Fellow Program at The Bard College Conservatory of Music. Violinist/violist Helena Baillie has been selected as the program’s first artist-fellow. Baillie’s tenure began on September 1 and will continue for one to two years. “I’m honored and thrilled to come to the Bard Conservatory as the first artist-fellow,” says Baillie. “I plan to perform the complete Brahms Sonatas on violin and viola and the three Violin Partitas of Bach on viola as a final project. I’ll document my progress in a new blog website with video and audio, which I look forward to sharing with the Bard community.”

“The Bard Conservatory’s new Artist-Fellow Program is meant to provide gifted young artists an opportunity to deepen and broaden their art in a stimulating environment,” says Robert Martin, director of the Conservatory. “The artist-fellow will have no obligations except to grow as an artist and interact with the community of the Conservatory and the College in unfettered and imaginative ways. We feel that conservatories need to look beyond the period of degree studies to the development of true artistry. We are deeply grateful to The Lewis Foundation, Inc. for enabling us to be responsive to this need.”

Helena Baillie is equally passionate about the violin and viola and studied both at The Curtis Institute of Music in Philadelphia. She frequently switches between the two in recital. Her New York debut was hailed by Strad Magazine for its “brilliance and poignancy.” Baillie has performed chamber music with Pinchas Zukerman and with the Beaux Arts Trio. She received the Barenreiter prize at the 2004 ARD International Music Competition and prizes at the 2001 Banff and 2003 Tertis competitions.

•Prepare and present a recital series at the college and at other venues
•Audit selected courses in the College in subject areas ranging across the curriculum
•Read, study, and reflect
•Work with colleagues, inside and outside Bard, in the development of a chamber music ensemble or a special musical project
•Join in rehearsals and performances of Conservatory ensembles, with the agreement of all concerned

Although it is anticipated that the activities of the Artist-Fellow will enrich the learning environment of the Conservatory and the College, the emphasis of the program is on the artistic growth of the Fellow. We recognize that, even after the completion of formal study, the path for young musicians is difficult, and we wish to help artists at this stage. Students of the Conservatory have much to gain from informal and unstructured contact with artists at this stage, who may serve as role models for the continuing pursuit of excellence. The AFT is designed to allow for the fruits of spontaneity and serendipity.

About The Bard College Conservatory of Music
Now in its fifth year, the Conservatory’s five-year undergraduate program is guided by the principle that musicians should be broadly educated in the liberal arts and sciences to achieve their greatest potential. While training and studying for the bachelor of music degree with world class musicians and teachers and performing in state-of-the-art facilities, such as the Frank Gehry–designed Richard B. Fisher Center for the Performing Arts, Conservatory students also pursue a bachelor of arts degree at Bard, one of the nation’s leading liberal arts colleges. Robert Martin serves as director of the Conservatory, Melvin Chen as associate director.

In 2006, artistic director Dawn Upshaw and head of program Kayo Iwama launched the Graduate Vocal Arts Program, a two-year master of music degree within the Conservatory. Course work extends from standard repertory to new music, alongside training in acting, core seminars that provide historical and cultural perspectives, analytical tools, and performance skills for vocal and operatic performance at the highest levels. The students—only eight are admitted each year—have performed at Weill Recital Hall, Zankel Hall, and at Bard’s Fisher Center in recitals and as soloists with the American Symphony Orchestra. The students offered world premiere performances of David Bruce’s opera A Bird in Your Ear and twice participated in Composing Song Professional Training Workshops led by Dawn Upshaw and composer Osvaldo Golijov in collaboration with Carnegie Hall’s Weill Music Institute. Alumni/ae have distinguished themselves in the Metropolitan Opera National Council Auditions, Los Angeles Opera Young Artists Program, and as prize-winners at a host of other national and international vocal competitions.
# # #