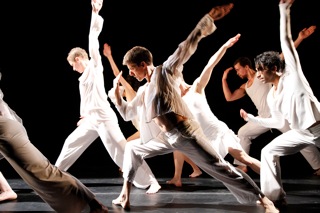 ANNANDALE-ON-HUDSON, N.Y.—The Bard College Dance Program closes the year with four performances of a dance concert featuring Bill T. Jones and Arnie Zane’s Continuous Replay (1977/1991) as well as new and historic choreography by faculty of the Bard Dance Program. The 2011 Bard College Faculty Dance Concert will present three evening performances on Friday, May 6; Saturday, May 7; and Sunday, May 8, at 7:30 p.m. and one matinée on Sunday, May 8, at 2 p.m. All performances will be held in LUMA Theater of the Fisher Center for the Performing Arts. Tickets are $15; $10 for senior citizens, non-Bard students, and Bard alumni; and free for the Bard community. Reservations are required. Please call the box office at 845-758-7900, or go to fishercenter.bard.edu.

The program includes a performance of Continuous Replay—a seminal work in the legacy of Bill T. Jones and his late partner Arnie Zane. The work is a minimalist exploration of gesture and was originally created as a solo by Zane in 1977 under the title Hand Dance. In 1991, Jones adapted the work for the 10-member Bill T. Jones/Arnie Zane Dance Company. Reconstructed by Leah Cox, education director of the Company, and Stuart Singer, teaching artist for the Company, 19 Bard students will perform this historic work at the Bard faculty concert. This performance of Continuous Replay has been made possible thanks to an NEA American Masterpieces Grant.


ABOUT THE BARD COLLEGE DANCE PROGRAM
The Bard Dance Program sees the pursuit of artistry and intellect as a single endeavor. We believe that the study of the body is a cognitive act demanding both physical practice and academic exploration. We focus on dance and choreography as a performing art with an interdisciplinary scope. Students are exposed to areas of inquiry that represent the broader contexts in which the art form exists, in and outside of the arts. We expect students to take risks—risks that call on their participation as citizens of the world and cultivate their perceptive sensibilities. We foster the discovery of a dance vocabulary that is meaningful to the dancer/choreographer and essential to her or his creative ambitions. This discovery leads to the cultivation of original choices—choices informed by a full exploration of a student’s surroundings, choices that find expression in new and dynamic ways. We prepare dancers for the versatility and integration necessary to face the questions: Where will dance go next? What will the next dance revolution look like and where will it come from? We believe that serious inquiry in all areas of the liberal arts is critical to the development of the whole person and to the success of our future artists.

Beginning in fall 2009, the Dance Program at Bard College has partnered with the Bill T. Jones/Arnie Zane Dance Company to offer new classes in dance technique and choreographic methods, as well as special campus-wide forums and workshops, such as this event. Courses are taught by current and former members of the Bill T. Jones/Arnie Zane Dance Company under the direction of Leah Cox, the company’s Education Director. This innovative partnership offers Bard students the unique opportunity to work closely with a world-renowned professional company during their undergraduate course of study.


ABOUT BILL T. JONES/ARNIE ZANE DANCE COMPANY
Now in its 29th year, the Bill T. Jones/Arnie Zane Dance Company was born out of an 11-year collaboration between Bill T. Jones and Arnie Zane (1948–1988).  During this time, they redefined the duet form and foreshadowed issues of identity, form, and social commentary that would change the face of American dance. Today, the 10-member Company has performed worldwide in over 200 cities in 40 countries on every major continent and is recognized as one of the most innovative and powerful forces in the modern dance world.