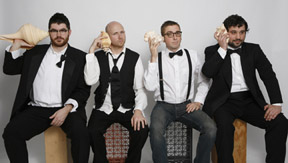 ANNANDALE-ON-HUDSON, N.Y.— The Bard College Conservatory of Music presents Sō Percussion on Sunday, September 18, at 3:00 p.m. in the Sosnoff Theater of the Richard B. Fisher Center for the Performing Arts as part of the “Conservatory Sundays” series at Bard College. Billboard Magazine calls Sō Percussion “astonishing and entrancing.” The New York Times describes their performances as “mesmerizing,” “brilliant,” and “consistently impressive”; and the Village Voice writes, “This extraordinary ensemble of four young percussionists is creating a sensation in the music world . . . a New York City experimental powerhouse.” Ticket prices for the Conservatory Sundays series are by suggested donation: $20 Orchestra seats; $15 Parterre and First Balcony. The minimum donation for Orchestra seating is $5. All ticket sales benefit the Conservatory’s scholarship fund. For ticket information contact the Fisher Center box office at fishercenter.bard.edu or call 845-758-7900.

Sō Percussion is a Brooklyn-based quartet whose original music and innovative work with contemporary composers has brought them international acclaim. Sō is: Eric Beach, Josh Quillen, Adam Sliwinski, and Jason Treuting. Starting this fall, its members will be The Bard College Conservatory of Music’s new faculty percussion ensemble in concert.

Since 1999, Sō Percussion has been creating music that explores all the extremes of emotion and musical possibility. Excitement about composers like John Cage, Steve Reich, and Iannis Xenakis—as well as the sheer fun of playing together— inspired the members of Sō to begin performing together while students at the Yale School of Music. A blind call to David Lang, Pulitzer Prize-winning composer and cofounder of New York’s Bang on a Can, yielded their first commissioned piece, the so-called laws of nature. Sō’s recording of the so-called laws of nature became the cornerstone of their self-titled debut album on Cantaloupe Music (the record label from the founders of Bang on a Can). In subsequent years, this relationship would blossom into a growing catalogue of exciting releases: Steve Reich’s masterpiece Drumming; Sō member Jason Treuting’s amid the noise; Treasure State, a collaboration with the electronic duo Matmos; and Paul Lansky’s Threads. Sō’s ongoing body of original work has resulted in exciting new projects such as the site-specific Music For Trains in Southern Vermont and Imaginary City, a fully-staged sonic meditation on urban soundscapes commissioned by the Brooklyn Academy of Music for the Next Wave Festival 2009 in consortium with 5 other venues. Sō’s next theatrical project where (we) live is slated to premiere in Fall of 2012.

With an audience comprised of “both kinds of blue hair... elderly matron here, arty punk there” (as the Boston Globe described it), Sō Percussion makes a rare and wonderful breed of music that both compels instantly and offers rewards for engaged listening. Sō Percussion has performed their unusual and exciting music all over the United States, with concerts at the Lincoln Center Festival, Carnegie Hall, Brooklyn Academy of Music, Stanford Lively Arts, Cleveland Museum of Art, and many other venues. In addition, recent tours to the United Kingdom, Russia, Australia, Italy, Germany, Spain, and the Ukraine have brought them international acclaim.

The mission of The Bard College Conservatory of Music is to provide the best possible preparation for a person dedicated to a life immersed in the creation and performance of music. The Conservatory features a unique double-degree program in which all undergraduate conservatory students receive a Bachelor of Music and a Bachelor of Arts in another field. In addition, the Conservatory offers graduate programs in vocal arts, led by renowned soprano Dawn Upshaw, and in conducting, led by Harold Farberman, as well as a Post-Graduate Collaborative Piano Fellowship, directed by Frank Corliss.