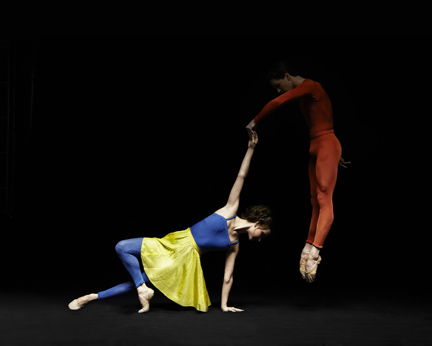 Hudson Valley to Get First Glimpse of the Company’s Fall Season
With Works by Merce Cunningham, Paul Taylor,
Twyla Tharp, and a World Premiere by Demis Volpi

ANNANDALE-ON-HUDSON, N.Y. – The Richard B. Fisher Center for the Performing Arts presents American Ballet Theatre (ABT) on Friday, November 4 and Saturday, November 5 at 8 p.m., and Saturday, November 5 and Sunday, November 6 at 2 p.m. Each performance will include a unique selection of dances from the company’s repertory, showcasing the work of some of the foremost American choreographers, including Twyla Tharp, Paul Taylor, Merce Cunningham, Martha Clarke, Robert Barnett, Felix Blaska, and Demis Volpi. Tickets are $25, $35, $45, and $55. To purchase tickets call the Fisher Center box office at 845-758-900, or go to fishercenter.bard.edu/.

“Once in a not too frequent while, there comes along an evening that reminds you why you’re in the theater in the first place, and why dance is not a luxury or a frill but a necessity of life. Such an evening was American Ballet Theatre.”
—Washington Post

American Ballet Theatre, led by Artistic Director Kevin McKenzie, makes its third appearance at Bard’s Fisher Center with this season’s engagement. Performances will be highlighted by the World Premiere of Private Light by Demis Volpi, as well as Paul Taylor’s Black Tuesday, a homage to 1930s America; The Garden of Villandry, choreographed by Martha Clarke, Robert Barnett, and Felix Blaska; and Merce Cunningham’s Duets, an exploration of the duet form set to music by John Cage. Three works by Twyla Tharp are also on the program, including Sinatra Suite, a suite of dances from Nine Sinatra Songs with costumes by Oscar de la Renta; In the Upper Room, set to music by Philip Glass; and the pas de deux from Known by Heart, also known as the “Junk” Duet.

American Ballet Theatre is recognized as one of the great dance companies in the world. Few ballet companies equal ABT for its combination of size, scope, and outreach. Recognized as a living national treasure since its founding in 1940, ABT annually tours the United States, performing for more than 600,000 people, and is the only major cultural institution to do so. It has also made more than 30 international tours to 42 countries as perhaps the most representative American ballet company, and has been sponsored by the State Department of the United States on many of these engagements. On April 27, 2006, by an act of Congress, ABT became America’s National Ballet Company®.

Programs and performances are subject to change.

These performances have been underwritten by the Martin and Toni Sosnoff Foundation.