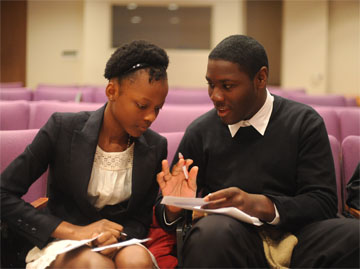 The topics for the two debates were “This House Believes That Facebook Does More Harm Than Good,” and “This House Would Lower the Voting Age in the United States.” Four of the three-person high school teams were fielded from the Bard High School Early College (BHSEC) schools in Queens, Manhattan, and Newark, New Jersey; Red Hook High School sent two teams, as did Rhinebeck High School. Red Hook Linden Avenue Middle School sent five teams, which competed against each other.

Bard Debate coaches Ruth Zisman and Jennifer Rankin, along with student members of the Bard Debate Union, have been working with students and faculty to organize and train debate teams at all six participating schools. “This event will enable students to gain tournament experience in competing with one another, and with students from Bard’s network of institutions,” says Jonathan Becker, vice president and dean for international affairs and civic engagement. “It is our hope that this will become an annual event.”

For more information about the Bard Debate Union contact Ruth Zisman, faculty adviser, at zisman@bard.edu or visit the website, debate.bard.edu.