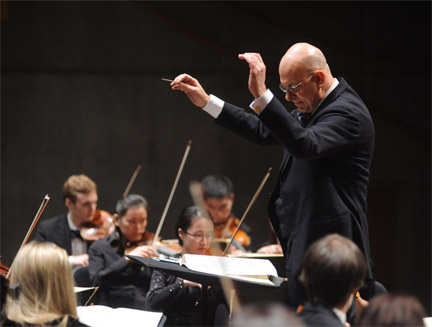 ANNANDALE-ON-HUDSON, N.Y.— The Bard College Conservatory Orchestra, under music director Leon Botstein, returns to Lincoln Center to celebrate the 24th Bard Music Festival “Stravinsky and His World” in a program of works by Stravinsky, Shostakovich, and Prokofiev, with violinist Shmuel Ashkenasi, a member of the Bard faculty, as soloist. The program includes Stravinsky’s Fireworks, Op. 4; Shostakovich’s Symphony No. 10 in E Minor, Op. 93; and  Prokofiev’s Violin Concerto No. 1. The concert will be performed at Alice Tully Hall on Wednesday, May 22, at 7 p.m. Tickets are $15, free admission for students with ID. For ticket information contact the Lincoln Center box office at www.lincolncenter.org or call 212-671-4050.

The 2013 Bard Music Festival Gala Dinner immediately follows the concert at Lincoln Center. For more information about the gala contact 845-758-7414 or events@bard.edu.

Recognized as one of the finest conservatories in the United States, The Bard College Conservatory of Music, founded in 2005, is guided by the principle that musicians should be broadly educated in the liberal arts and sciences. All undergraduates complete two degrees over a five-year period, a bachelor of music and a bachelor of arts in a second field. In addition, the Conservatory offers a graduate program in vocal arts, led by renowned soprano Dawn Upshaw; graduate programs in orchestral and choral conducting, codirected by James Bagwell, Leon Botstein, and Harold Farberman; a postgraduate Collaborative Piano Fellowship, directed by Frank Corliss; and a Preparatory Division for students ages 3–18. For more information go to www.bard.edu/conservatory.

Leon Botstein has been president of Bard College since 1975, where he is also Leon Levy Professor in the Arts and Humanities. He is chairman of the board of the Central European University and a board member of the Open Society Foundations. He has been music director of the American Symphony Orchestra since 1992. He is artistic codirector of the SummerScape and Bard Music festivals at Bard College, and conductor laureate of the Jerusalem Symphony Orchestra, where he served as music director from 2003 to 2010. Forthcoming publications: a sequel to his Jefferson’s Children: Education and the Promise of American Culture (1997); an anthology of essays for the Bard Music Festival; the 2011 Tanner Lectures on The History of Listening from Oxford University Press; and an anthology of essays in German from Szolnay Verlag in Vienna, 2013. Other published works: The Compleat Brahms (ed. 1999); Jews and the City of Vienna, 1870–1938 (ed. 2004); Judentum und Modernität: Essays zur Rolle der Juden in der Deutschen und Österreichischen Kultur, 1848–1938 (1991; Russian edition 2003). Editor, The Musical Quarterly. Honors include the National Arts Club Gold Medal; the Centennial Medal of the Harvard Graduate School of the Arts and Sciences; the Austrian Cross of Honour for Science and Art; the Award for Distinguished Service to the Arts from the American Academy of Arts and Letters; the Carnegie Academic Leadership Award; election to the American Philosophical Society in 2010; Longy Conservatory’s Leonard Bernstein Award, 2012; University of Chicago’s Alumni Medal, 2012.

Born in Tel Aviv, Israel, Shmuel Ashkenasi attended the Musical Academy of Tel Aviv and gave his first public performance at the age of 8. After studying with Ilona Feher, he came to the United States to study with Efrem Zimbalist at the Curtis Institute of Music. He won the Merriweather Post Competition, was a finalist in Belgium’s Queen Elisabeth competition, and received second prize in the International Tchaikovsky Competition in Moscow. Ashkenasi has toured the former Soviet Union twice and concertized extensively in Europe, Israel, the Far East, and the United States, and has collaborated with Rudolf Serkin, Thomas Hampson, Murray Perahia, Peter Serkin, and Menahem Pressler. As first violin of the famed Vermeer Quartet, he has gained a reputation as one of the world’s outstanding chamber musicians. From 1969 until 2007, Ashkenasi was professor of music and artist-in-residence at Northern Illinois University. In addition to teaching at The Bard College Conservatory of Music, Ashkenasi is on the faculty of the Curtis Institute of Music.