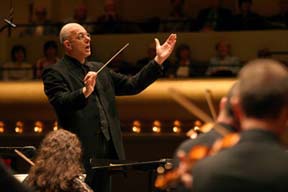 ANNANDALE-ON-HUDSON, N.Y.— The Richard B. Fisher Center for the Performing Arts at Bard College presents the American Symphony Orchestra (ASO), Friday, April 24 and Saturday, April 25 at 8 p.m. The program includes Leoš Janáček’s Sinfonietta; Hermann Goetz’s Symphony No. 2 in F Major, Op. 9, and Alberto Ginastera’s Harp Concerto, Xing Gao ’17, harp. The concert will be conducted by Leon Botstein, music director. A special preconcert talk by Alexander Bonus, assistant professor of music, begins at 7 p.m. Individual tickets are $25, $30, $35, and $40. Call 845-758-7900 or visit the Fisher Center website at fishercenter.bard.edu to purchase tickets or for further information.

The ASO’s final concert of the season concludes with Janáček’s Sinfonietta, an orchestral composition whose score calls for 25 brass players, and which the composer said was intended to express “contemporary free man; his spiritual beauty and joy; his strength, courage, and determination to fight for victory.” Written near the end of his life, Sinfonietta is considered to be one of Janáček’s masterpieces.

Harpist Xing Gao, from Beijing, China, began playing the piano at age of four. Five years later, she began harp studies with Linlin Wei and Yin Zuo at the Central Conservatory of Music in Beijing as the school’s youngest harp student. In 2012, she enrolled at The Bard College Conservatory of Music, where she studies with Bridget Kibbey and Sara Cutler. Her second major is Italian studies. In addition to being chosen as a winner of the Bard College Conservatory of Music’s Concerto Competition in 2014, Gao has performed in the Beijing International Harp Festival as a soloist. She won the Lyon & Healy Award in 2010 at the International Harp Competition in Shanghai, and the Special Golden Prize at the Vera Dulova International Harp Competition in Moscow in 2011.

Leon Botstein is now in his 23rd year as music director and principal conductor of the American Symphony Orchestra (ASO). He has been hailed for his visionary zeal, often creating concert programs that give audiences a once-in-a lifetime chance to hear live performances of works that are ignored in the standard repertory, and inviting music lovers to listen in their own way to create a personal experience. At the same time, he brings his distinctive style to core repertory works. He is also artistic codirector of Bard SummerScape and the Bard Music Festival, which take place at The Richard B. Fisher Center for the Performing Arts at Bard College, where he has been president since 1975. He is conductor laureate of the Jerusalem Symphony Orchestra, where he served as music director from 2003–2011.

Botstein leads an active schedule as a guest conductor all over the world, and can be heard on numerous recordings with the London Symphony (including its Grammy-nominated recording of Popov’s First Symphony), the London Philharmonic, NDR-Hamburg, and the Jerusalem Symphony Orchestra. Many of his live performances with the ASO are available online, where they have cumulatively sold more than a quarter of a million downloads. Upcoming engagements include the Royal Philharmonic, while recently he conducted the Russian National Orchestra, the Taipei Symphony, Los Angeles Philharmonic at the Hollywood Bowl, and Sinfónica Juvenil de Caracas in Venezuela and Japan, becoming the first non-Venezuelan conductor invited by El Sistema to conduct on a tour.

Botstein is highly regarded as a music historian. His most recent book is Von Beethoven zu Berg: Das Gedächtnis der Moderne (2013). He is the editor of The Musical Quarterly and author of numerous articles and books. He is currently working on a sequel to Jefferson’s Children, about the American education system. For his contributions to music he has received the award of the American Academy of Arts and Letters and Harvard University’s prestigious Centennial Award, as well as the Cross of Honor, First Class, from the government of Austria. Other recent awards include the Caroline P. and Charles W. Ireland Prize, the highest award given by the University of Alabama; the Bruckner Society’s Julio Kilenyi Medal of Honor, for his interpretations of that composer’s music; the Leonard Bernstein Award for the Elevation of Music in Society; and Carnegie Foundation’s Academic Leadership Award. In 2011 he was inducted into the American Philosophical Society.

About The Richard B. Fisher Center for the Performing Arts at Bard College

The Fisher Center is home to the Bard College Theater & Performance and Dance Programs, providing students access to exceptional theater facilities and opportunities to work with professional directors and dramaturges on publicly attended productions throughout the year. Live Arts Bard, a residency and commissioning program, is a laboratory for professional artists in theater, dance, and performance to test ideas and develop new projects, many of which premiere at the Fisher Center. The Bard College Conservatory of Music and the Bard College Music Program stage regular orchestral and chamber concerts.