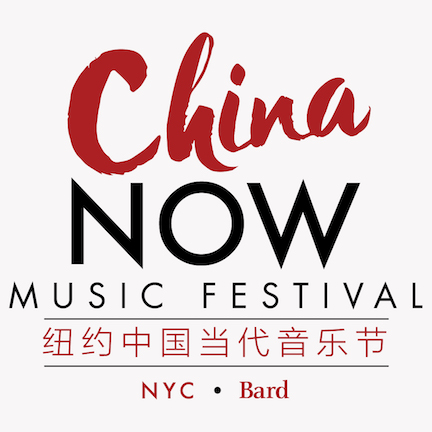 The creation of the China Now Music Festival, according to Cai, was inspired by the richness and vitality of music in Chinese society: “Western classical music is developing in China at phenomenal speed, but just as exciting is the freshness that Chinese composers bring to the Western world. With the China Now Music Festival as our looking glass, we hope to bring people and cultures from East and West together through music.”

The opening concert, on Friday, October 19 at 8:00 p.m. at Bard’s Fisher Center for the Performing Arts, includes world premieres of two works by composers from the Central Conservatory of Music. The concert also includes the U.S. premiere of Chen Yi and Zhou Long’s Humen 1839, and Ye Xiaogang’s My Faraway Nanjing for cello and orchestra.

The Lincoln Center concert is focused on how Chinese composers have looked into the past. The program confronts three wrenching events in modern Chinese history: the first Opium War of 1839–42, the Nanjing Massacre of 1937, and what is now known as the “sent-down youth” movement during the Cultural Revolution of 1966–76.

The concert begins with the symphony Humen 1839 by Chen Yi and Zhou Long. The work is a musical portrait of the heroic effort to confiscate and burn imported opium. Ye Xiaogang’s My Faraway Nanjing for cello and orchestra is dedicated to the 300,000 civilian victims killed in the Japanese invasion of Nanjing during World War II. Composer Tony Fok and writer Su Wei both lived through the chaotic period of the Cultural Revolution. They were among the more than 17 million urban Chinese youths sent down to the countryside to labor alongside farmers. This experience inspired their oratorio/cantata Ask the sky and the earth, featuring a chorus of more than 200 members from around the United States, some of whom were also among the “sent-down youth.” This year marks the 50th anniversary of the movement.

In collaboration with the China Institute, the festival will hold a panel discussion on Saturday, October 20 from noon to 2:00 p.m. at the China Institute in New York City. Titled “Facing History: Musical Reflections on the Opium War, the Nanjing Massacre, and the Cultural Revolution,” the panel will include composers Ye Xiaogang, Zhou Long, Chen Yi, and Tony Fok, writer Su Wei, and festival Artistic Director Jindong Cai. A light lunch will be served.


The US-China Music Institute of the Bard College Conservatory of Music was formed in 2017 with the goal of creating a major platform in the United States for the study, performance, and appreciation of contemporary Chinese music. In partnership with the Central Conservatory of Music in Beijing, it has embarked on a five-year Chinese Music Development Initiative, which will aid in the promotion of Chinese music through an undergraduate degree program at the Bard Conservatory, the annual China Now Music Festival each October at Bard and in New York City, an annual scholarly conference in the spring, and the Bard Youth Chinese Orchestra Summer Academy each August. For more information, visit barduschinamusic.org.


Jindong Cai is artistic director of the China Now Music Festival. He is professor of music and arts at Bard College and director of the US-China Music Institute of the Bard College Conservatory of Music. Prior to joining Bard, he was a professor and director of orchestral studies at Stanford University for 14 years. Over three decades of his career in the United States, Cai has established himself as a dynamic conductor, respected expert of Western classical music in China, and leading advocate of music from across Asia. He is frequently interviewed by news media around the world, including the New York Times, Wall Street Journal, BBC, and NPR. Together with his wife, Sheila Melvin, Cai has coauthored many articles on the performing arts in China and the book Rhapsody in Red: How Western Classical Music Became Chinese. Their latest book, Beethoven in China: How the Great Composer Became an Icon in the People’s Republic, was published by Penguin in September 2015.

Cai is a Beijing native with strong ties to China’s musical world. He came to the United States in 1985 and studied at the New England Conservatory and the College-Conservatory of Music in Cincinnati. In 1989, he was selected to study with famed conductor Leonard Bernstein at the Tanglewood Music Center, and won the Conducting Fellowship Award at the Aspen Music Festival in 1990 and 1992. Cai is a three-time recipient of the ASCAP Award for Adventurous Programming of Contemporary Music, and received an “Asian Hero” award from the California State Legislature in 2010.

The Orchestra Now (TŌN) is a group of vibrant young musicians from across the globe who are making orchestral music relevant to 21st-century audiences. They are lifting the curtain on the musicians’ experience and sharing their unique personal insights in a welcoming environment. Handpicked from the world’s leading conservatories—including The Juilliard School, Shanghai Conservatory of Music, Royal Conservatory of Brussels, and Curtis Institute of Music—the members of TŌN are not only thrilling audiences with their critically acclaimed performances but also enlightening curious minds by giving on-stage introductions and demonstrations, writing concert notes from the musicians’ perspective, and holding one-on-one discussions with patrons during intermissions.

Conductor, educator, and music historian Leon Botstein founded TŌN in 2015 as a master’s degree program at Bard College, where he also serves as president. The orchestra is in residence at Bard’s Richard B. Fisher Center for the Performing Arts, presenting multiple concerts there each season as well as taking part in the annual Bard Music Festival. It also performs regularly at the finest venues in New York and beyond, including Carnegie Hall, Lincoln Center, the Metropolitan Museum of Art, and elsewhere. The orchestra has performed with many distinguished conductors, including Fabio Luisi, Neeme Järvi, Gerard Schwarz, and JoAnn Falletta. theorchestranow.org

Bard College Conservatory of Music is recognized as one of the finest conservatories in the United States. Founded in 2005, the Conservatory is guided by the principle that young musicians should be broadly educated in the liberal arts and sciences to achieve their greatest potential. The mission of the conservatory is to provide the best possible preparation for a person dedicated to a life immersed in the creation and performance of music. bard.edu/conservatory

China Institute advances a deeper understanding of China through programs in education, culture, art, and business. China Institute is the go-to resource on China—from ancient art to today’s business landscape and its rapidly shifting culture. Its programs, school, and gallery exhibitions bring to life the depth, complexity, and dynamism of China. Founded in 1926 by China reformers Hu Shi, K. P. Wen, and John Dewey, China Institute is the oldest bicultural, nonprofit organization in America to focus exclusively on China. Chartered in 1944 as a school of continuing education, its language and cultural school is the oldest educational center of its kind in the United States. chinainstitute.org