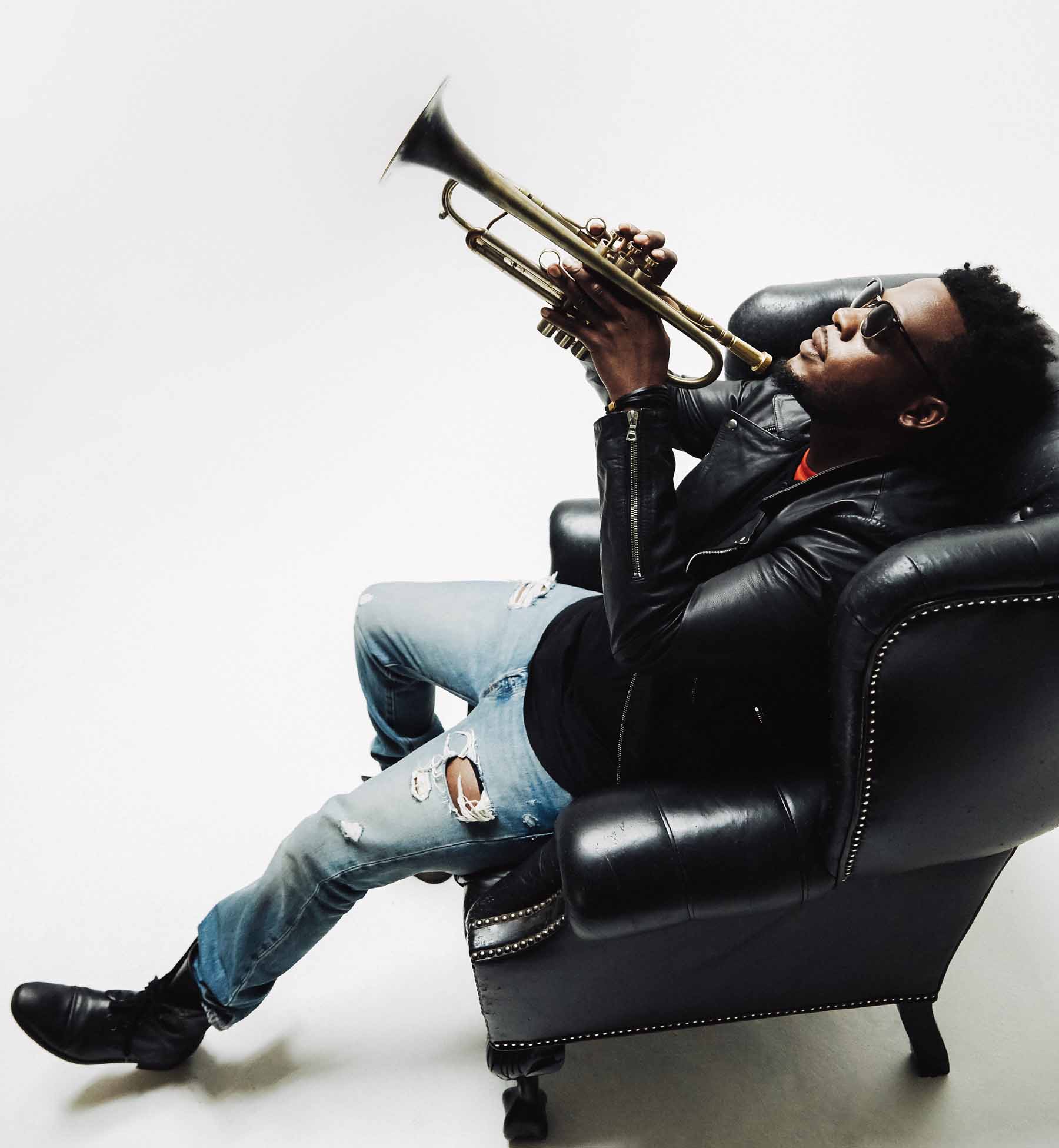 First of three-concert winter jazz series starts February 9 with special guests Maimouna Youssef and DJ Raydar Ellis
ANNANDALE-ON-HUDSON, NY— The Fisher Center and Catskill Jazz Factory present Jazz and the Birth of Hip-Hop, the first in a three-concert winter jazz series, Sound the Trumpet! The world premiere series explores the rhythmic influences and musical storytelling that have shaped hip-hop, reggae, merengue, and beyond. Grammy Award–winning trumpeter Keyon Harrold, named “the future of the trumpet” by Wynton Marsalis, leads Jazz and the Birth of Hip-Hop, positioning the histories of hip-hop and jazz alongside one another through original compositions, classic songs from the evolution of hip-hop, and new works from Harrold’s recent album release The Mugician. Joining Harrold are two special guests, Grammy Award–nominated vocalist Maimouna Youssef and producer/scholar/MC DJ Raydar Ellis. This unique concert takes place one night only on Saturday, February 9, at 7:30 p.m. in the Fisher Center’s intimate LUMA Theater. Tickets start at $25 and can be ordered online at fishercenter.bard.edu or by calling the box office at 845-758-7900. Subscribe and purchase great seats for all three shows in this special series for $99.

About the Artists:
Keyon Harrold was born and raised in Ferguson, MO, the St. Louis suburb that tore into America’s national consciousness in 2014 with the police shooting of Michael Brown and the bitter protests and riots that followed. While Ferguson looms large in Harrold’s album The Mugician, it examines our troubled times through a far wider lens than any one tragedy. Sweeping and cinematic, the music draws on elements of jazz, classical, rock, blues, and hip-hop to create something uniquely modern, unmistakably American. Guests including Pharoahe Monch, Gary Clark Jr., Big K.R.I.T., Guy Torry, Georgia Anne Muldrow, and Robert Glasper add to the record’s eclectic nature, but it ultimately triumphs as a unified, cohesive whole both because of Harrold’s virtuosic skill as a trumpeter and songwriter and because of his relentlessly optimistic belief in brighter days to come.

Harrold grew up one of 16 children in a family that prioritized music and community across generations. His grandfather was a police officer who retired from the force to found a drum and bugle corps for local youth, both of his parents were pastors, and nearly all of his siblings sing and perform music today. Culture shock hit Harrold hard at 18, when he left Ferguson for New York City to enroll in The New School. In New York, he landed his first major gig with Common, an experience that he says broadened his musical horizons beyond jazz to include funk, Afrobeat, R&B, and hip-hop. Soon he was performing with stars like Snoop Dogg, Jay Z, Beyonce, Rihanna, Eminem, Maxwell, and Anthony Hamilton.

In 2009, he released his solo debut, Introducing Keyon Harrold, and then won wide acclaim for his trumpet performances in Don Cheadle’s Miles Davis biopic, Miles Ahead. The Mugician is a portmanteau of “musician” and “magician, a nod to a nickname Cheadle bestowed upon the young virtuoso, and it’s an apt descriptor for a record that pushes beyond the traditional boundaries of jazz trumpet. In fact, the album doesn’t even begin with trumpet, but rather with a track called “Voicemail,” which features an inspirational message from Harrold’s mother set to a stirring, orchestral soundscape. Entirely unedited, her words lay the groundwork for an album that celebrates the importance of family (10 of Keyon’s siblings appear on the record) and the absolute necessity of optimism in the face of darkness and doubt. These days, Harrold is a parent himself, and he pays tribute to his son with a pair of tracks on the album, “Lullaby” and “Bubba Rides Again.” Issues of identity and equality percolate throughout the record, sometimes subtly beneath the surface, sometimes more pointedly, as in “Circus Show.” However, the album’s most powerful moments come with the one-two punch of “MB Lament” and “When Will It Stop,” songs written in the wake of Michael Brown’s death and the senseless killings of so many others like him.

It’s a monumental task, one that calls for tremendous empathy and sensitivity. To give voice to the silenced requires more than just talent and ambition, it requires faith, imagination, strength, and determination. Above all, it requires perspective. Fortunately, that is what Keyon Harrold brings most of all.

The Catskill Jazz Factory is a program of 23Arts Initiative, a 501(c)3 nonprofit organization. For more information, go to catskilljazzfactory.org.