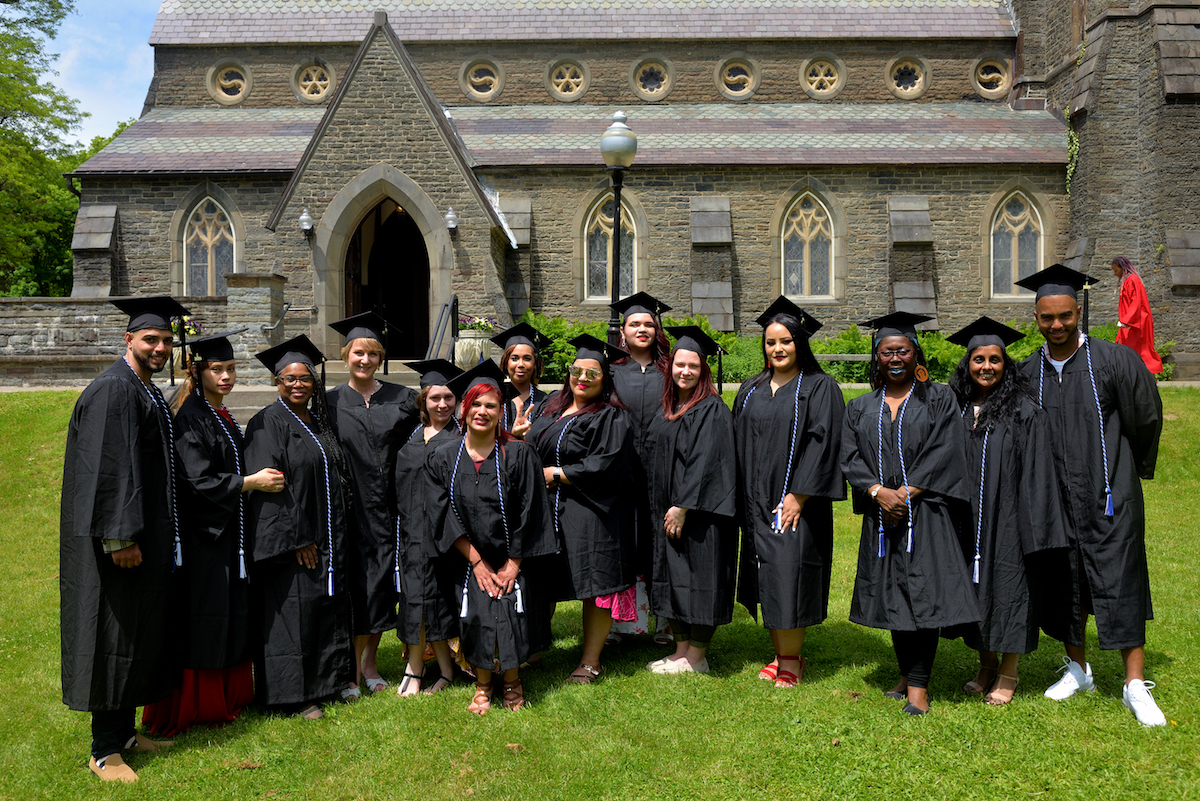 ANNANDALE-ON-HUDSON, N.Y. – The Bard Prison Initiative recently celebrated the achievements of its students at graduations on the main Bard campus in Annandale-on-Hudson on May 25 and at Taconic Correctional Facility, a medium security prison for women in Bedford Hills, New York, on May 29.

“Bard has always worked to find and support talented students who are excluded from or discouraged by other institutions of higher education,” said BPI Executive Director Max Kenner ’01. “BPI has done that for two decades within the New York State prison system, and we are now doing it outside of prison as well. Through partnerships with community-based institutions, the Bard Microcollege lowers operating costs, engages talented prospective students where they are, and reduces the financial and bureaucratic burdens that prevent many from enrolling and completing degrees.”

While only about 60 percent of AA candidates nationwide graduate within three years of starting their degree program, this first full cohort of Bard Microcollege students achieved a 100 percent graduation rate—a remarkable accomplishment for students, faculty, and Bard College. Graduates are continuing on to bachelor’s degree programs at Smith, Elms, Mount Holyoke, and Trinity Colleges.

At BPI’s 19th commencement ceremony at Taconic Correctional Facility, Bard College awarded associate in arts degrees to eight students. Commencement speaker Emily Tow, executive director and president of The Tow Foundation, was awarded the Bard Medal in recognition of her leadership in the reform of juvenile justice systems in Connecticut and New York and in the development of the catalytic power of philanthropy. Tow issued a challenge to the graduates: “No matter what led you to Taconic. . . you are the new leaders, mentors and supporters of those who follow you in this community,” she said. “You are scholars. Use this experience to not only advance your own future, both within these walls, and out in the world, but also to lead by example. Be a friend and a cheerleader and others will follow in your footsteps.”

Addressing those gathered under the tent, graduate Jasmine Milton ’19 said, “when I came to prison, I had this mindset that I was alone. . . No one to rely on but myself. But that was not the truth. Standing here before you today, I can scream from the rooftops that I am a graduate of Bard College. That is what I want to be known as.”

For twenty years, BPI has created groundbreaking opportunities for college within America’s prison systems. These programs transform the negative impacts of criminal punishment and create radical inroads of access and opportunity to higher learning.

Today, BPI enrolls over 300 incarcerated students full-time in programs that culminate in degrees from Bard College; it offers extensive support for its alumni in and around New York City; and it has developed a nationwide network of leading universities and colleges to catalyze a transformation in the relationship between education and criminal justice in the United States. BPI’s newest initiative, the Bard Microcollege, expands yet further the scope and impact of this work, delivering high-quality liberal arts education to isolated communities outside of prison through partnerships with community-based institutions.

For more information about the Bard Prison Initiative, visit bpi.bard.edu, and follow us on social media: facebook.com/bpibard and on Instagram @bard_prison_initiative.

About Bard College
Founded in 1860, Bard College is a four-year residential college of the liberal arts and sciences located 90 miles north of New York City. With the addition of the Montgomery Place estate, Bard’s campus consists of nearly 1,000 parklike acres in the Hudson River Valley. It offers bachelor of arts, bachelor of science, and bachelor of music degrees, with majors in nearly 40 academic programs; graduate degrees in 11 programs; nine early colleges; and numerous dual-degree programs nationally and internationally. Building on its 159-year history as a competitive and innovative undergraduate institution, Bard College has expanded its mission as a private institution acting in the public interest across the country and around the world to meet broader student needs and increase access to liberal arts education. The undergraduate program at our main campus in upstate New York has a reputation for scholarly excellence, a focus on the arts, and civic engagement. Bard is committed to enriching culture, public life, and democratic discourse by training tomorrow’s thought leaders. For more information about Bard College, visit bard.edu.