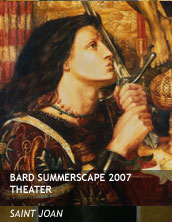 
"[T]he most notable Warrior Saint in the Christian calendar, and the queerest fish among the eccentric worthies of the Middle Ages." Thus George Bernard Shaw Referred to the heroine of what many consider his greatest play, Saint Joan. Born circa 1412, and burnt for heresy, witchcraft, and sorcery at the tender age of 19, Joan of Arc was canonized as a saint in 1920. Shaw’s play, written in 1923,was instrumental in winning him the Nobel Prize two years later. Given his spectacular reputation as a freethinker and assassin of sacred cows,many feared that Shaw would satirize Joan or make her out as a fraud. Instead, without romanticizing her as a victim or tragic heroine, he paints her as a human being of unparalleled vision, courage, confidence, and imagination. His Joan goes to the stake as a logical consequence of the world’s inability to deal with those whose purity is incorruptible.

Director Gregory Thompson brings a British authenticity to this passionate play of conflicting truths. The artistic director of AandBC, a position he has held since he founded the company in 1998, and recently appointed head of the acclaimed Tron Theatre in Glasgow, he is justly esteemed for creating innovative theater, revisiting classical texts with the aim of making them more accessible and combining vivid physical imagery and live original music to create truly vibrant performances.