“A hotbed of intellectual and aesthetic adventure.” – New York Times 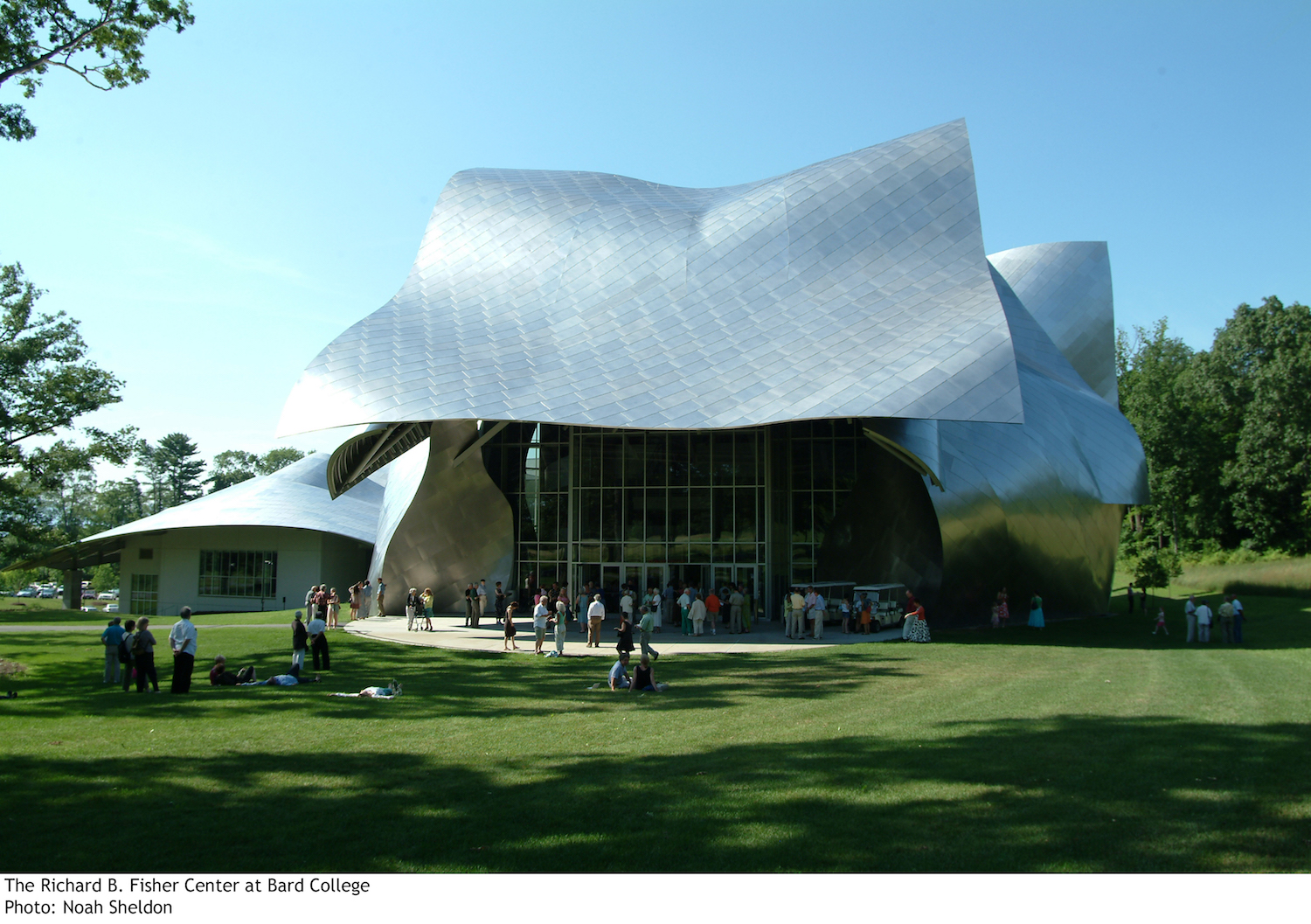 Bard SummerScape returns to live performance with a wide-ranging and adventurous lineup this summer. Staged for limited in-person audiences, the 2021 season presents the 31st Bard Music Festival, “Nadia Boulanger and Her World,” which pays tribute to one of the most important female figures in classical music history; the first fully staged American production of King Arthur (Le roi Arthus), the only opera by Boulanger’s compatriot and near-contemporary Ernest Chausson; the world premiere of I was waiting for the echo of a better day, a major new dance commission from Bard’s Fisher Center Choreographer-in-Residence Pam Tanowitz and Sphinx Medal of Excellence-winning composer Jessie Montgomery; Most Happy in Concert, comprising songs from Frank Loesser’s The Most Happy Fella, directed by Tony nominee Daniel Fish; “Black Roots Summer,” a two-weekend celebration of Black roots music curated by Michael Mwenso and Jono Gasparro; and a newly commissioned concert from longtime SummerScape favorite Mx. Justin Vivian Bond. All programs will be staged between July 8 and August 15 in both the Frank Gehry-designed Fisher Center and outdoors at Bard’s Montgomery Place campus, a designated National Historic Landmark set amid rolling lawns, woodlands and gardens against the spectacular backdrop of the Catskill Mountains. Select programs will also be livestreamed at UPSTREAMING, the Fisher Center’s virtual stage.

“This summer’s festival includes new works by artists who have deep and evolving relationships with the Fisher Center. We are also thrilled to be presenting several artists for the first time, including some we’ve collaborated with over the past year as part of our continuing journey toward becoming a more equitable and inclusive organization. After the uncertainty and isolation of the pandemic, the coming months will offer particularly joyous and meaningful opportunities for all these artists to return to rehearsal and performance again, inviting audiences to join them on voyages of creation and discovery.”

Music: 31st Bard Music Festival, “Nadia Boulanger and Her World”
Founded by co-artistic director Leon Botstein, it is the Bard Music Festival – “a highlight of the musical year” (Wall Street Journal) – that provides the creative inspiration for SummerScape. The first woman to come into Bard’s festival spotlight, Nadia Boulanger (1887–1979) was a true musical polymath. A prize-winning composer, peerless composition teacher and trailblazing conductor, organist and scholar, she is “arguably … the most important woman in the history of classical music” (BBC Music magazine). Through the prism of her life and career, “Nadia Boulanger and Her World” offers an illuminating series of concerts, pre-concert talks and panel discussions over the final two weekends of SummerScape. On August 6–8, Weekend One explores Music in Paris in the first half of the 20th century, and on August 13–15, Weekend Two addresses The 20th-Century Legacy of Nadia Boulanger. Twelve concert programs spaced over the two weekends explore such themes as Paris as the epitome of chic, the crosscurrents of influence between France and America, and the relationship between French Catholicism and spirituality.

Opera: Ernest Chausson’s King Arthur (first fully staged American production)
Musical America observes: “Bard’s annual opera has become an indispensable part of the summer operatic landscape.” Of an earlier generation than the Boulanger sisters, Ernest Chausson (1855–99) played a pivotal part in the development of French late-Romanticism. Set to his own libretto, Chausson’s sole completed opera, King Arthur (Le roi Arthus, 1886–95) depicts the tragic love triangle between the mythological English king, his wife Guinevere and his trusted knight Lancelot. Despite having enjoyed recent revivals in Edinburgh and Paris, the opera has yet to be seen on the American stage. With its rich lyricism, ravishing harmonies and otherworldly final chorus, however, it has won many advocates. In King Arthur, Gramophone affirms, “passion is often white-hot; the orchestration is opulent; and there are … passages of sheer beauty.”

Marking the opera’s long overdue first fully staged American presentation, Bard’s new production will be directed by Princess Grace Award-winner Louisa Proske, Founding Co-Artistic Director of Heartbeat Opera and designated Associate Artistic Director and Resident Director of Germany’s Halle Opera. Singing the title role will be baritone Norman Garrett, who made his Metropolitan Opera debut in last season’s Porgy and Bess after winning top prizes in more than a dozen international vocal competitions. He will be joined by Grammy Award-winning mezzo-soprano Sasha Cooke as Guinevere under the baton of Leon Botstein, who previously led the opera both on a Telarc recording with the BBC Symphony Orchestra and in a 2001 concert performance with the American Symphony Orchestra at Lincoln Center. That performance was hailed as “one of the best Leon Botstein and the American Symphony have given together,” showing Chausson’s score to be “sumptuous, majestic, brilliant in its fanfare moments and often powerful” (Paul Griffiths, New York Times). King Arthur will run for four performances in the Fisher Center’s Sosnoff Theater on July 25, 28 and 30 and August 1.

Dance: world premiere of I was waiting for the echo of a better day by Pam Tanowitz and Jessie Montgomery

SummerScape has long produced and premiered significant dance productions, including commissions from choreographers Ronald K. Brown, Trisha Brown, Lucinda Childs, Bill T. Jones, John Heginbotham and Mark Morris. SummerScape 2021 opens with the world premiere of I was waiting for the echo of a better day, a new commission from Pam Tanowitz, the Fisher Center’s inaugural Choreographer-in-Residence, in collaboration with Jessie Montgomery, next Composer-in-Residence of the Chicago Symphony, whose honors include the ASCAP Foundation’s Leonard Bernstein Award. Set to new arrangements of Montgomery’s chamber music, which has been called “turbulent, wildly colorful and exploding with life” (Washington Post), along with material from her collaboration with Eleonore Oppenheim, big dog little dog, this large-scale work marks Tanowitz’s first return to SummerScape since the resounding success of her ballet Four Quartets. A Fisher Center commission, Four Quartets was named “Best Dance Production of 2018” by the New York Times, which pronounced it “the greatest creation of dance theater so far this century.”

Performed with live musical accompaniment from artists including Montgomery on violin and Oppenheim on double bass, I was waiting for the echo of a better day will premiere in three performances on July 8, 9 and 10 against the glorious backdrop of the Hudson River and Catskill Mountains, using the historical parkland of Montgomery Place as inspiration.

Concerts on the Stage at Montgomery Place: Most Happy in Concert
The legendary composer-songwriter behind Guys and Dolls and How to Succeed in Business Without Really Trying, Frank Loesser accrued a string of honors including an Oscar, multiple Tony Awards and a Pulitzer Prize. Featuring some of his most soaring lyricism, his classic 1956 show, The Most Happy Fella, “is one of the greatest musicals ever. Or one of the greatest operas. Hell, it’s just great,” declares New York magazine.

Loesser’s songs take center stage in Most Happy in Concert, a setting of his ebullient songs for a cast of seven female and non-binary vocalists with a 13-piece instrumental ensemble. Originally developed for a full production in SummerScape 2020, this meditation on our longing for human connection, made only more poignant by the isolation of the past year, will now be presented as a concert under the summer sunset.

Helming the concert is director Daniel Fish, whose revelatory, Tony Award-winning revival of Oklahoma! debuted at SummerScape 2015 before traveling to St. Ann’s Warehouse in Brooklyn and then to Broadway, where it scored the director his first Tony nomination. Most Happy in Concert will take place in three performances on August 5, 6 and 7 on the Stage at Montgomery Place.

Both weekends take place on the Stage at Montgomery Place, where Mwenso and the Shakes give two performances of their set “Love Will Be the Only Way” on July 23 and 24. Fronted by Mwenso himself, the Harlem-based Shakes hail from destinations ranging from Madagascar, South Africa and France to Hawaii and Jamaica. Taking listeners on a journey through the kaleidoscope of Black ancestral diasporic music and traditions, by way of Fats Waller, Muddy Waters, James Brown and other musical legends, the Shakes’ international blend of jazz and blues has been called “intense, prowling and ebullient” (New York Times).

Next, on July 29, Mwenso leads a lineup of special guest vocalists in “Genius Mother Mary”: A Sonic Retrospective of Mary Lou Williams. A Black woman in the male-dominated field of jazz, Grammy-nominated American pianist, arranger and composer Mary Lou Williams (1910–81) wrote hundreds of compositions and arrangements, some of them for Duke Ellington and Benny Goodman, as well as making more than a hundred recordings and serving as a friend, mentor and teacher to Thelonious Monk, Charlie Parker, Miles Davis, Dizzy Gillespie and many more. As NPR put it, it was she who “mastered the language of swing and pushed the genre towards more expansive, experimental sounds.”

Finally, on July 30 and 31, the hills come alive with The Sound of (Black) Music, when Bard presents “Edelweiss,” “My Favorite Things,” “Do-Re-Mi” and other favorite songs from Rodgers and Hammerstein’s beloved final musical, as reimagined through an Afrofuturistic lens by the 20-plus BIPOC vocalists and instrumentalists assembled by Mwenso and Gasparro.

SummerScape tickets
All tickets go on sale on June 2. The Box Office can be reached by telephone at (845) 758-7900, on Mondays through Fridays at 11am–4pm EST, or by email at [email protected]. Tickets are also available 24/7 on Bard’s website at fishercenter.bard.edu.