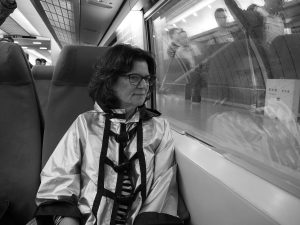 Poet and essayist, interdisciplinary performance artist and playwright, and author of twenty genre-crossing books and chapbooks. Recent titles include W—/M—, a diptych in prose and prose poetry (SplitLevel, 2013); Artifact of Hope, “an epistolary essay combined with the documentary remains of a post-Occupy project” (Ordinance #10, Kenning Editons, 2017); L’Impromptu de Hannah/Hannah Cut In, a performance score for speaking voices and manual typewriters(trans. Abigail Lang, Joca Seria, 2018); and the two volumes Sue in Berlin and Sue á Berlin, representing poets’ theater plays and other performative texts from 2001-2016 (trans. Sabine Huynh, PURH, 2018). Other works include Adorno’s Noise (Essay Press, 2008), Gardener of Stars, a novel (2001), Open Box (Belladonna 2006). She has published one cd (with Jon Raskin), Open Box (Tzadik, 2012), and is currently working on a recording of a music/text lecture presented at Documenta 13. Other works in-progress include the performance, Gardener of Stars, an opera, with speaking voices, piano, and microelectronics and a critical essay, “Provisional Worlds,” which focuses on the topic of durational time in experimental works by contemporary women poets and the performance. Awards include the Foundation for Contemporary Arts and Opera America Next Stage. She lives in Ypsilanti and Detroit and is a professor of English at Eastern Michigan University.