All Conservatory undergraduates pursue a five-year program leading to two degrees: the bachelor of music degree and the bachelor of arts degree in a field other than music. The innovative curriculum of The Bard College Conservatory of Music is guided by the principle that musicians should be broadly educated in the liberal arts and sciences in order to achieve their greatest potential.
Apply Now
Download the Program Brochure Why I Chose Bard

"I chose Bard Conservatory because I love the double-degree program. I have always dreamed of studying science, and when I started playing bassoon, I knew that I couldn’t choose one over the other. Here, I can study both of my passions."

Learn More About Our Students 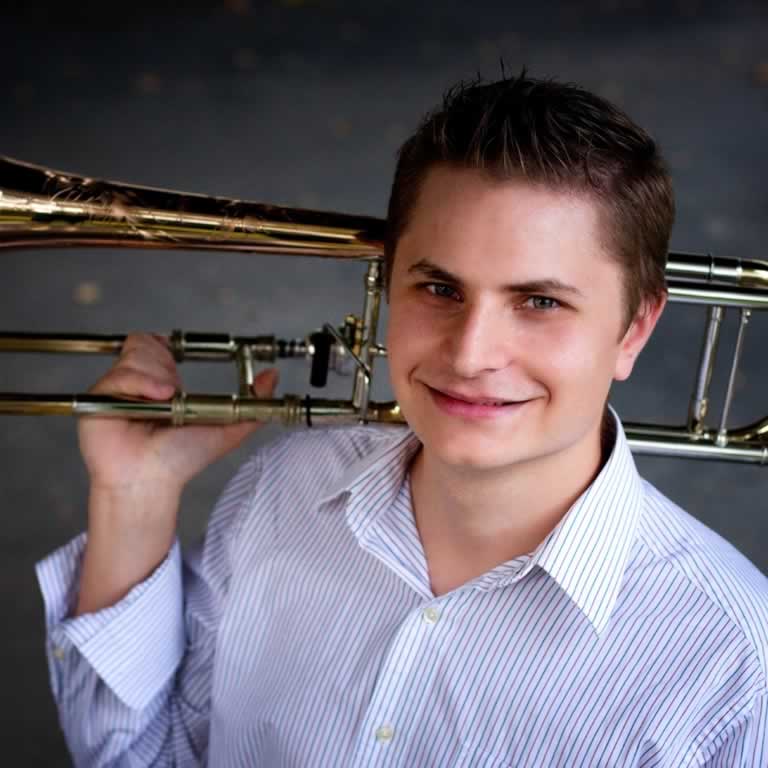 "I wouldn't be an artist if I didn't go to Bard. Bard gives you a lot of skills, many which you might not necessarily recognize at the time. But, the knowledge, skills, and challenge of the program, these all allow you to be able to step out of your comfort zone and really push yourself. I am very thankful for my education and to Bard for broadening my perspective."

What are you up to nowadays? Where are you based?
I'm currently based in Budapest, Hungary, and I play principal trombone in the Hungarian State Opera. I’ve been here for five years now, after being in the states for 11 years. It was a big transition to come back, because the last time I was here, I was a kid and then I came back as an adult.

What has your experience been like as the principal trombonist for the Hungarian State Opera?
Opera became my dream job when I started studying at Bard with the principal players of the Metropolitan Opera. We would always try to schedule my lessons in such a way that I could sneak into a rehearsal or see a performance at the Met– it was so fantastic. With opera, I love the drama, and that something is happening on stage as well. I love the costumes, the lighting, the sets, and of course the music. You really can’t learn opera in a practice room. In my experience, you can start a rehearsal being 110% prepared, and feel like you know nothing. There is always action happening– the singer doesn't hold the note as long as they were supposed to, something strange happens on stage, or the conductor jumps, and you wait, and then all of a sudden, you get a cue. So yeah I love this kind of you know, action happening. It's a great feeling when you have played an opera a few times and really know it. You just sit in the pit and you enjoy it and you have the capacity to make some kind of artistic musical saying that's your own. I really do love my job.

What was the audition process like?
It’s been a little while, but I still remember I took quite a few auditions in the States prior to this one, also a couple of them in Europe in Germany, Switzerland, and Norway. Auditioning to be an orchestra musician, it's like science. For auditions everybody has a different kind of perspective and a different way of preparation. I was way too young when I took my first audition, and I probably shouldn't have done that, but I learned a lot of things on this journey. For the Hungarian State Opera, the first round was here in Europe, and the first round was the concerto. It was one movement on tenor trombone and the other piece was on alto trombone. This is pretty uncommon in the United States, to have the concerto in the first round, and on two instruments. Long story short, three of us were elected as successful candidates and they wanted to try each of us out for a period of time with the orchestra. I was the third one they tried out. So after the audition I left knowing that I was successful at the audition, but I technically still didn't have a job. I received another call from the Opera House that they wanted to try me out starting September 1 for at least six months. So I actually got a contract for one year, and then I think I got tenure after two and a half or three years.

Do you have any words of wisdom for students wanting to have a career playing with an orchestra?
Well, there are much better auditioners than me in the business. These days there’s so much information available about auditioning. There are podcasts, videos, master classes, books written by experts, and it's almost boring how many resources there are. But, I would say to take advantage of every opportunity you have to play for someone, and to sit and talk with principal players at major orchestras if you can. These people really know how to win an audition, it’s not just out of luck. And do mock auditions, organize them with your colleagues and classmates. You have to practice auditioning just as much as the excerpts. I will also say that when you're preparing for an audition, there’s a time to take all of the information and knowledge you’ve gained, and to trust your musicianship and playing. I learned this lesson on my own, and at my own cost. I went to audition at an Opera house in Switzerland and a couple of days before the audition I took lessons with both principal trombone players. They wanted me to do the exact opposite things, and that threw me off. Needless to say I didn’t win that audition. Trust the knowledge from your teachers, and trust yourself and your playing. Bring what you have, and then they’ll like it or they won’t.
Before my audition for the Hungarian state opera, I didn't take a lesson for two months on the audition repertoire. It was winter break at Curtis, where I was studying at the time, and I flew home for a few weeks. The audition was scheduled during January and leading up to it I got into a routine. I went swimming and had a massage every day, every single day, prior to the audition. I also prepared mentally, I woke up every day at the same time, and I practiced every day, I think, four or five times a day for 30 minutes. I was very much focused because I really, really wanted this job.

How has your education from Bard shaped you as an artist?
I wouldn't be an artist if I didn't go to Bard. In high school, I was kind of a rebel. I rebelled against the academics, because I was so much focused on my music, and then I ended up going to Bard! It was not easy, that's for sure, but I am very thankful for my education and to Bard for broadening my perspective. My academic degree was in German studies, and my advisor was Professor Franz Kempf. He introduced me to Heine, to the music of Wagner. Bard gives you a lot of skills, many which you might not necessarily recognize at the time. But, the knowledge, skills, and challenge of the program, these all allow you to be able to step out of your comfort zone and really push yourself.

What is your favorite memory from your time at Bard, and why?
I loved seeing how the Conservatory developed. I started Bard in the second year of the Conservatory, and I think we were like 20 students or something. We could throw a party and every single member of the conservatory would show up, including Eileen, and even Bob Martin. I don’t want to leave out any important people, but I have to highlight, of course, Franz Kempf, who really pushed me to my limits and helped me to become a critical reader and thinker. I also did the Bard College bird friendly campus with some other students and a Biology Professor, who is now retired. We went bird watching and built bird houses together, you can still see these birdhouses around the campus. I loved fishing and birdwatching at Bard. It was my playground, because nobody really did these things. Nobody ever went fishing, which was great because I could catch all the fish. I have very fond memories of this.

What is the most important piece of advice that you would give to recent alumni and current students?
One skill is no skill. I think that explains everything, and really proved to be true during the pandemic. Learn as many skills as you can possibly learn. You need to know how to create your own opportunities. Spend time learning things about the music business. Learn how to do your taxes, how to get management, how to talk to people when you have a fancy dinner after a concert, how to build your own website, how to do search engine optimization in your area, so people find you. Learn other languages so you can go and live abroad. All of these skills still support your music career. You have to stand on multiple legs, these days, and the pandemic has proved this. My final advice and always be an open minded person. Never say that you already know something. Whether you think you know something really, really well there's always more to learn.