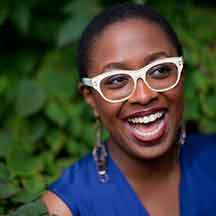 ANNANDALE-ON-HUDSON, N.Y.— The Richard B. Fisher Center for the Performing Arts and the Catskill Jazz Factory present the Aaron Diehl Trio featuring Grammy-nominated vocalist Cécile McLorin Salvant in a centenary tribute to jazz legend Billie Holiday on Friday, May 8 at 8 p.m. in the acoustically superb Sosnoff Theater. Tickets are $25–45 and can be purchased on-line at fishercenter.bard.edu, or by calling the box office at 845-758-7900.

The New York Times has called Diehl a “smart young pianist with a fastidious grasp of jazz traditions,” and has said of Salvant: “If anyone can extend the lineage of the Big Three—Billie Holiday, Sarah Vaughan, and Ella Fitzgerald—it is this . . . virtuoso.”

Known for her definitive interpretations of classic jazz standards, Billie Holiday is considered to be one of the greatest jazz vocalists of all time. Salvant will perform some of Holiday’s most beloved repertoire including her renditions of “Jeepers Creepers,” “You Go to My Head,” “Lover Man,” and “Hello, My Darling.”

Aaron Diehl’s recent collaborations with internationally acclaimed artists and ensembles include: Warren Wolf, Lew Tabackin, Matt Wilson, Wycliffe Gordon, Wynton Marsalis and his Septet, and the Jazz at Lincoln Center Orchestra. As the 2014 Monterey Jazz Festival Commission Artist, Diehl became one of the youngest artists to receive this honor and composed Three Streams of Expression, dedicated to pianist and composer John Lewis. He is also the 2013 recipient of the Jazz Journalists Associations Award for Up-And-Coming Artist, the 2012 Prix du Jazz Classique recipient for his album Live at the Players from the Académie du Jazz, and is the winner of the 2011 Cole Porter Fellowship from the American Pianists Association. In an effort to nurture the development of young jazz artists and the community, Diehl was the inaugural Artistic Director of the Catskill Jazz Factory.

Diehl’s next album on Mack Avenue Records, Space, Time, Continuum, emphasizes the artistic collaborations between generations. Establishing the jazz language as a continuum uniting artists, the album includes performances by NEA Jazz Master Benny Golson (tenor saxophone) and Duke Ellington Orchestra alumnus Joe Temperley (baritone saxophone), alongside Diehl’s other established trio—Quincy Davis (drums) and David Wong (bass). The majority of the album consists of Diehl’s original compositions. The title track, featuring vocalist Charenee Wade, was co-written by Cécile McLorin Salvant. The Bespoke Man’s Narrative (2013), Diehl’s debut album, reached No.1 on the JazzWeek Jazz Chart and was hailed by JazzTimes for displaying “precision and polish.” KCRW praised the album, stating, “This is an album you can listen to again and again, honest music that invites you back in to discover new wonders with each listening.” Live at the Players (2010) featured both of his trios: Quincy Davis and David Wong, and Paul Sikivie and Lawrence Leathers. His first solo album, Live at Caramoor (2008), was a concert recorded at the Caramoor Festival. For more information go to www.aarondiehl.com.

Cécile McLorin Salvant was born and raised in Miami, Florida of a French mother and a Haitian father. She started classical piano studies at 5, and began singing in the Miami Choral Society at 8. Early on, she developed an interest in classical voice, began studying with private instructors, and later with Edward Walker, vocal teacher at the University of Miami.

In 2007, Cécile moved to Aix-en-Provence, France, to study law as well as classical and baroque voice at the Darius Milhaud Conservatory. It was in Aix-en-Provence, with reedist and teacher Jean-François Bonnel, that she started learning about improvisation, instrumental and vocal repertoire ranging from the 1910s on, and sang with her first band. In 2009, after a series of concerts in Paris, she recorded her first album Cécile, with Jean-François Bonnel’s Paris Quintet. A year later, she won the Thelonious Monk competition in Washington D.C.

Cécile performs unique interpretations of unknown and scarcely recorded jazz and blues compositions. She focuses on a theatrical portrayal of the jazz standard and composes music and lyrics which she also sings in French, her native language as well as in Spanish. She enjoys popularity in Europe and in the United States, performing in clubs, concert halls, and festivals accompanied by renowned musicians like Jean-Francois Bonnel, Rodney Whitaker, Aaron Diehl, Dan Nimmer, Sadao Watanabe, Jacky Terrasson (she was the guest singer on his latest album, Gouache), Archie Shepp, and Jonathan Batiste.  She is the voice of Chanel's “Chance” ad campaign for the third consecutive year. In August 2012, Cécile recorded WomanChild for the Mack Avenue Label with Aaron Diehl, Rodney Whitaker, Herlin Riley and James Chirillo.

Cécile has performed at numerous festivals such as Jazz à Vienne, Ascona, Whitley Bay, Montauban, Foix, with Wynton Marsalis and the Jazz at Lincoln Center Orchestra in New York’s Lincoln Center and Chicago’s Symphony Center and with her own band at the Kennedy Center, the Spoleto Jazz Festival, Detroit Jazz Festival and other venues.

Cécile’s WomanChild was nominated for the 2014 Grammy Award for Best Jazz Vocal Album.

Ben Ratliff writes in The New York Times “she sings clearly, with her full pitch range, from a pronounced low end to full and distinct high notes, used sparingly — like the one I heard a few weeks ago at Dizzy’s Club Coca-Cola on the last word of “What a Little Moonlight Can Do,” the spire in a magnificent set. Her voice clamps into each song, performing careful variations on pitch, stretching words but generally not scatting; her face conveys meaning, representing sorrow or serenity like a silent-movie actor. She also presents a lot of jazz history, and other things…”

For more information go to www.cecilemclorinsalvant.com.

Billie Holiday was the preeminent jazz singer of her day and among the most revered vocalists of the century. Although her brief life was fraught with tragedy, Holiday left a transcendent legacy of recorded work. Her pearly voice, exquisite phrasing, and tough-tender persona influenced the likes of Janis Joplin and Diana Ross, among others. She helped originate the now standard “Swing Song” style and collaborated with a variety of fellow legends, including Benny Goodman, Teddy Wilson, Count Basie, Artie Shaw, and others. In particular, Holiday formed a unique musical bond with tenor saxophonist Lester “Prez” Young, who dubbed her “Lady Day.”

A powerful new arts model, the Catskill Jazz Factory offers in-school workshops and concerts, artist residencies, and world-class performances throughout the Hudson Valley. Through this programming, the Jazz Factory supports some of today's best young jazz artists with educational, creative, and performance opportunities at diverse venues across the region. By partnering with educational facilities, arts organizations, and a variety of local non-profits and businesses, the Catskill Jazz Factory encourages audiences of all ages to participate in community building through jazz.

For more information go to www.catskilljazzfactory.org.