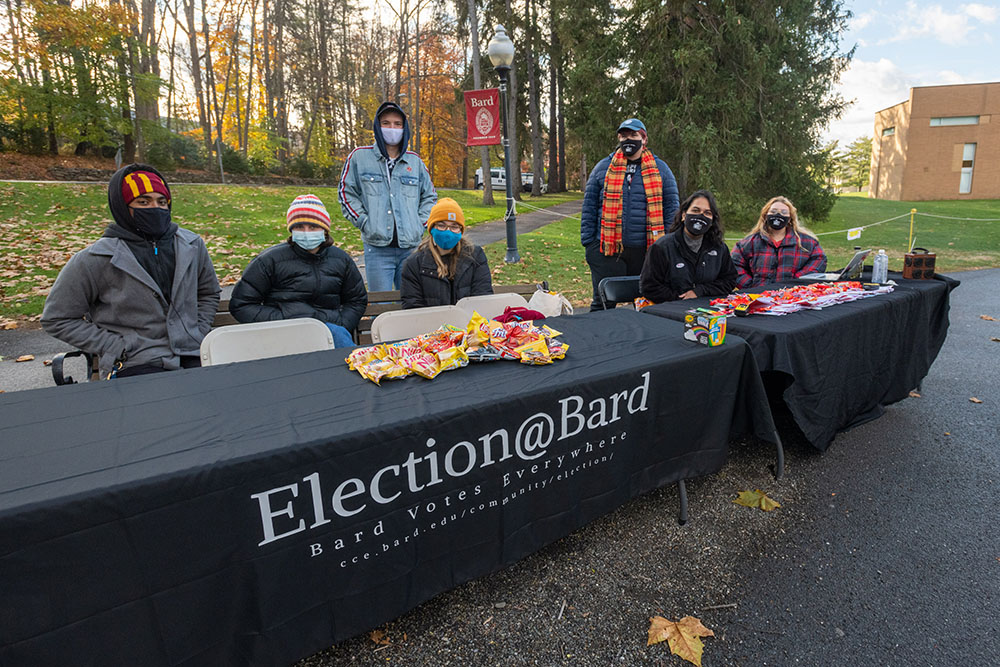 Election 2020 at Bard College. Photo by Karl Rabe
On Thursday July 15, 2021, Bard College President Leon Botstein joined with the student-led voting rights initiative Election@Bard and staff and students of the College to file a lawsuit against the Dutchess County Board of Elections for violating the voting rights of students. The lawsuit, filed in the Supreme Court of the State of New York in Dutchess County, follows yearslong efforts by Bard students to establish an on-campus polling location. This comes after the October 2020 court ruling that the campus voting site would be open to all District 5 voters for the last presidential election.

The Bard College community comprises the overwhelming majority of the district’s eligible voting population at nearly 70%. The alternate polling site, St. John’s Episcopal in Barrytown, proposed by Republican Commissioner Eric Haight, is not compliant with the Americans with Disabilities Act and Haight refuses to abide by state law mandating an accurate survey of the site. St. John’s is inaccessible by public transportation in clear violation of New York State Election Law, and is situated on an unsafe route that lacks sidewalks and adequate street lighting. The route creates a significant hardship for voters with disabilities and the majority of students who don’t have cars. The lawsuit challenges the ongoing failure of the Dutchess County Board of Elections to comply with the New York Constitution and state laws by discriminating against youth voters and refusing to open a polling location on the Bard College campus where the vast majority of voters in the district live, work and study.

This lawsuit follows an agreement just prior to the 2020 election after Supreme Court Judge Maria Rosa found Haight’s representations on the record for failure to situate an on-campus polling site to be “simply untrue.” Judge Maria Rosa ordered that there be polling sites at both Bard College Bertelsmann Campus Center in addition to St. John the Evangelist. The Campus Center is nearly three times larger than St. Johns, is ADA compliant, and is within walking distance of most voters in the district. This change proved to be a success in the presidential election of 2020. With nearly 85% of Bard students registered to vote, there was a line outside the Campus Center early that Tuesday morning awaiting the opening of the polls. Students and other residents of District 5 were all able to vote in the Campus Center safely and conveniently, all while maintaining the protocols of the COVID-19 pandemic.

Since the resounding success of the last Election Day in providing a safe and convenient space for voters and poll workers across political parties, the Town of Red Hook Board reaffirmed its previous, unanimously approved resolutions supporting the Campus Center as the District 5 polling location on February 9, 2021. Nonetheless, the Board of Elections has taken the extraordinary measure to refuse to certify a District 5 polling location for the November 2, 2021 General Election. This current lawsuit is in response to the BOE’s attempt to flagrantly disregard its statutory obligations to designate a polling location by the state deadline, and to erroneously presume that the status quo may apply as a substitute. Conveniently, the BOE has presumed that the status quo mandates that only the Church may serve as the polling location for District 5 voters – even though both the Church and the on-campus location served voters in 2020.

“Bard College is committed to the link between education and democracy,” said Bard College President Leon Botstein. “Our efforts to fight the suppression of youth voters is central to this commitment. We believe that colleges should not simply offer rhetorical support for students, but act in the public interest. That is why I have joined students as a plaintiff in the lawsuit.”

“Voting, and encouraging others to do the same, is arguably the most impactful way people can influence our democratic processes. Government–at all levels–has a fundamental obligation to ensure accessible, safe, and equitable access to the ballot. Historically and presently, federal, state, and local agencies– as well as those who administered them in their official capacities– have leveraged their power to directly suppress and restrict the vote of young people, communities of color, people with disabilities, and other marginalized groups,” said student plaintiff Tomas Forman. “The case here in Dutchess County District 5 is unique, but is also in many ways a reflection of what has, and is, happening elsewhere. This litigation is about more than simply ensuring a polling place on the Bard campus. It's also about sending a clear message, undergirded by the legitimacy of adjudication, that election boards across this country can no longer suppress voting by placing polling places in arbitrary, inaccessible, and frankly unjustifiable locations.”

“I feel that this lawsuit is one of the first steps that must be accomplished in order to combat voter suppression in our district,” said student plaintiff Sarina Culaj. “As a Bard student, I feel the direct impact of youth voter suppression through the actions that Commissioner Haight has taken to block the addition of a polling place on campus. Through the lawsuit, I hope that we can not only create a permanent polling place on the Bard campus, but also show that youth voting can and will be uplifted in our district.”

“The Board of Elections, particularly Commissioner Haight, is continuing its efforts to suppress the youth vote in this, the 50th anniversary of the 26th amendment which lowered the voting age from 21 to 18,” said Jonathan Becker, Bard’s Executive Vice President and Vice President for Academic Affairs. “The Board has failed to assign a polling site, misled voters in the district, and blatantly ignored rules pertaining to the Americans with Disabilities Act. What is going on in Dutchess County with the suppression of the youth vote is a microcosm of what is taking place across the country with underrepresented communities. It is shameful and it is shameful that political leaders, through their complicity and silence, condone such repressive measures.”

“Fifty years ago, this nation came together across partisan lines to support the expansion of the ballot free of age discrimination through the ratification of the Twenty-Sixth Amendment,” said Yael Bromberg, co-counsel for the Plaintiffs, and legal scholar of the Twenty-Sixth Amendment. “The principles that drove the ratification of that Amendment continue to be true today: young people are critical to the practice of democracy. We must remove obstacles to the ballot—and that includes bringing polling places on campus. The Dutchess County Board of Elections has made its intentions clear: it simply does not want Bard College students to vote—counter to the values of our democracy, which are beyond partisanship.”

“My colleagues at Stris & Maher and I are honored to represent Bard, its faculty, staff, students, families, and neighbors and humbled by their longstanding dedication to making the Bertelsmann Center available as a safe, convenient polling location for the voters of Red Hook’s District 5,” said Michael Donofrio, co-counsel for the Plaintiffs. “We look forward to vindicating their rights in the course of this litigation.”

This is the fifth instance since 2000 where Bard students have resorted to litigation or the threat thereof over schemes aimed at limiting their voting rights. The courts ruled in favor of the students in all preceding legal actions. The current lawsuit follows years of advocacy by Bard College students, including Andrew Goodman Student Ambassadors and their peers, for an on-campus polling site.

Counsel on the lawsuit are Yael Bromberg of Bromberg Law LLC, and Michael Donofrio of Stris & Maher LLP.

The full lawsuit can be read here: https://tools.bard.edu/wwwmedia/files/8850342/87/Bard-CourtDocs.pdf

For further information on the fight for a polling site at Bard, go here: https://cce.bard.edu/community/election/voting-rights/

About Bard College
Founded in 1860, Bard College is a four-year residential college of the liberal arts and sciences located 90 miles north of New York City. Bard’s campus consists of nearly 1000 park-like acres in the Hudson River Valley. It offers bachelor of arts, bachelor of science, and bachelor of music degrees, with majors in nearly 40 academic programs; graduate degrees in 11 programs; nine early colleges; and numerous dual-degree programs nationally and internationally. Building on its 161-year history as a competitive and innovative undergraduate institution, Bard College has expanded its mission as a private institution acting in the public interest across the country and around the world to meet broader student needs and increase access to liberal education. Bard is known for its academic excellence and emphasis on the arts and civic engagement, and is committed to enriching culture, public life, and democratic discourse by training tomorrow’s thought leaders. For more information about Bard College, visit bard.edu.
# # #
7/19/21