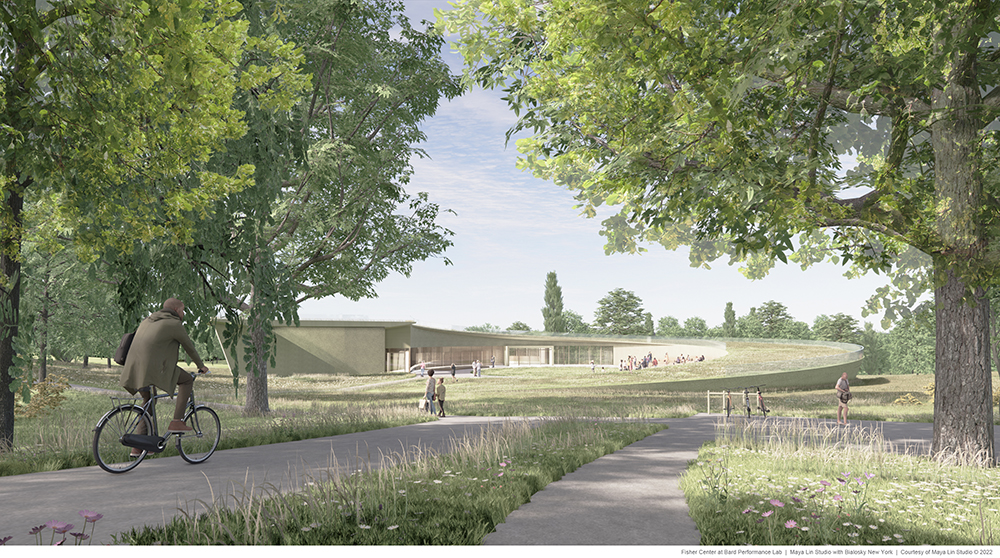 The 25,000-square-foot building will contain five state-of-the-art studios for artist residencies, rehearsals, informal performances, and dance and theater classes, which will be connected by gathering hubs. It will function as a laboratory for the performing arts, where students and professional artists work side by side, informing each other’s practices and sharing their discoveries and works-in-progress with audiences from the Bard community and the public. With a sloping grass-covered roof, the spiral-shaped building will appear to emerge from the meadow surrounding it, encircling a grassy courtyard for outdoor classes, gatherings, or performances.

Maya Lin’s practice, encompassing art, architecture, and landscape, has made her one of the world’s most sought-after artists. Her recent commissions include the Neilson Library at Smith College, the Museum of Chinese in America in Manhattan, and the Civil Rights Memorial in Montgomery, Alabama. She was recently chosen to design a public art installation for the Obama Presidential Center in Chicago. In 1981, Lin, then a 21-year-old architecture student, won the design competition for the Vietnam Veterans Memorial in Washington, DC, which remains one of the most visited public memorials in the world. She is also well known to Hudson Valley residents for Wavefield, her spectacular earthwork at Storm King Art Center.

“Bard is honored and proud to have Maya Lin as the architect of its new performing arts studio building,” said Bard College President Leon Botstein. “Her artistry will enhance the beauty of the Hudson Valley and offer a remarkable complement to Frank Gehry’s Fisher Center for the Performing Arts.”

Maya Lin added, “I am delighted to have been selected to design the performing arts studio building at Bard. I have long admired the Fisher Center, and to be able to create a new building in close proximity to it allows me to create a quiet and respectful dialogue with Frank Gehry’s magnificent work. Frank was my teacher at Yale, and it’s particularly meaningful for me to design this new building in relation to his. I will set the studio building into the landscape, tucking it into a hillside so at first only its green roof will be visible. Yet the sloping land will allow double-height studios to open fully to the meadow and woodlands, connecting artists, students, and faculty to the landscape while creating a unique and strong architectural presence. We are designing a high performance, energy efficient, low carbon building that will be sensitive to its site, reflecting my aesthetic and my concern for the environment.”

Fisher Center Board Chair Jeanne Donovan Fisher noted, “Our new studio building will help fulfill the purpose and potential of the Fisher Center after its first glorious two decades. Gehry’s building has two magnificent theaters, but our ambitious program has expanded beyond the current facility, and we urgently need more space for rehearsals, smaller-scale performances, and teaching. Maya Lin’s beautiful design will position the Fisher Center to leap into its third decade as one of the most vital and forward-thinking arts centers in the country.”

Fisher Center Artistic Director Gideon Lester said, “As the Fisher Center approaches its 20th anniversary, we are deepening our mission as a creative home for artists, where we make radical, long-term investments in their practices at all stages of their careers, and help them realize their artistic dreams. It’s fitting that Maya Lin, herself a peerless artist, is developing this home for artists. Intimately in touch with its natural environment, at once grounded and taking flight, her building will unfurl from the meadow like an aperture between earth and air, to create a welcoming and inspiring laboratory for artists, students, faculty, and the public.”