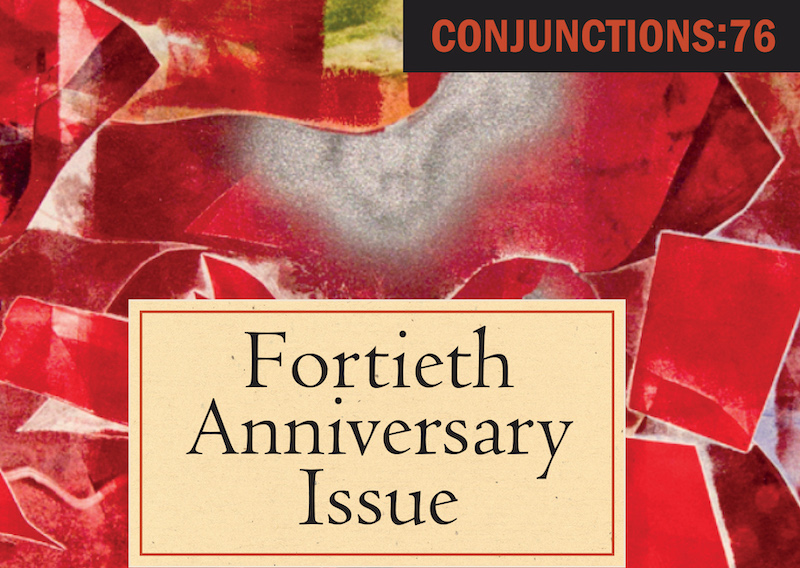 In 1981, the price of a first-class stamp rose from 15 cents to 20, Ronald Reagan was inaugurated as president, MTV started broadcasting, the first space shuttle, Columbia, was launched, the AIDS virus was identified, and Sandra Day O’Connor became the first female Supreme Court justice. Nineteen eighty-one was also the year that twenty-something Bradford Morrow founded and edited the first issue of a literary journal called Conjunctions. Since Conjunctions:1 brought together Robert Creeley, Denise Levertov, Octavio Paz, Josephine Miles, John Hawkes, and dozens of others,  the journal has published nearly two thousand writers—some avowed masters, some at the beginnings of their careers. As Morrow notes with pride, Conjunctions has featured debut and very early appearances in print by Mei-mei Berssenbrugge, William T. Vollmann, Can Xue, Forrest Gander, Brian Evenson, Chinelo Okparanta, Shelley Jackson, Mary Caponegro, Jim Crace, Martine Bellen, H. G. Carrillo, Nam Le, Robert Antoni, Raven Lelani, Vanessa Chan, and many others like Ben Okri, Julia Elliott, Karen Russell, and Isabella Hammad, who are included in the latest issue, Conjunctions:76, Fortieth Anniversary Issue (spring, 2021). The recipient of numerous awards, including most recently the Whiting Literary Magazine Prize, Conjunctions continues to forge ahead some three decades after Bard College became its publisher, and four since it first saw the light of day.

In his Editor’s Note, novelist and Bard Literature Professor Morrow celebrates many moments across Conjunctions’ four decades, among them, trading ideas about starting a literary magazine with poet Kenneth Rexroth in the latter’s converted barn library, a launch party hosted by the Gotham Book Mart, an interview with Chinua Achebe in his modest home in Annandale for Conjunctions’ tenth anniversary issue, and the day he was “mesmerized by a story titled ‘Good Old Neon’ sent by a polite young guy named David Foster Wallace.”

“The way I wanted to set off into the future was by honoring the past, in particular one of my publishing heroes, James Laughlin, who had founded New Directions—home to Rexroth, Pound, Williams, Stein, et al.—and provided me with an informal education like no other,” says Morrow, winner of the PEN/Nora Magid Award for Excellence in Editing a Literary Journal. “As I’ve written before, Conjunctions is a living notebook, one in which new voices, along with those of writers who are further along on their journeys, enrich and complicate the flow of literature. Even heralded masters were once unknown fledglings. And all are engaged in the difficult feat of gathering words, those everyday haggard incandescent things, into a poem or story or essay, part of an inspired and necessary continuum of which we’re honored to be a part.”

Longtime Conjunctions contributor Rick Moody writes, in the foreword to the Fortieth Anniversary Issue, that “it is not outrageous to say that [Conjunctions] is the best literary magazine in the United States of America” and praises Morrow for his editorial vision and unwavering leadership and support.

“At no time in these decades did I ever fail to know well the support of Bradford Morrow, nor did he ever forbear noting when I was not doing the job terribly well and could do better,” writes Moody. “And in this way did I always feel that I had a home in these pages, a situation I know is shared by many, many other writers, all of us feeling that we could rely on Conjunctions for its welcome, its standards, its consistent excellence, as a place that would take our furthest-out fancies, but also provide a consistently astounding residence, containing a worldview, an idea of literature, a confraternity of the surprising and original.”

Edited by Bradford Morrow and published twice yearly by Bard College, Conjunctions publishes innovative fiction, poetry, and creative nonfiction by emerging voices and contemporary masters. For nearly four decades, Conjunctions has challenged accepted forms and styles, with equal emphasis on groundbreaking experimentation and rigorous execution. In 2020, Conjunctions received the prestigious Whiting Literary Magazine Prize. The judges noted, “Every issue of Conjunctions is a feat of curatorial invention, continuing the Modernist project of dense, economical writing, formal innovation, and an openness to history and the world.” Named a “Top Literary Magazine 2019” by Reedsy, the journal was a finalist for the 2021, 2018, and 2019 ASME Award for Fiction and the 2018 CLMP Firecracker Award for General Excellence. In addition, contributions to recent issues have been selected for The Best American Short Stories 2021, The Best American Essays (2018, 2019), The Pushcart Prize XLIV: Best of the Small Presses, Best American Experimental Writing 2020, Best Small Fictions 2019, and The Year’s Best Dark Fantasy & Horror: 2019.