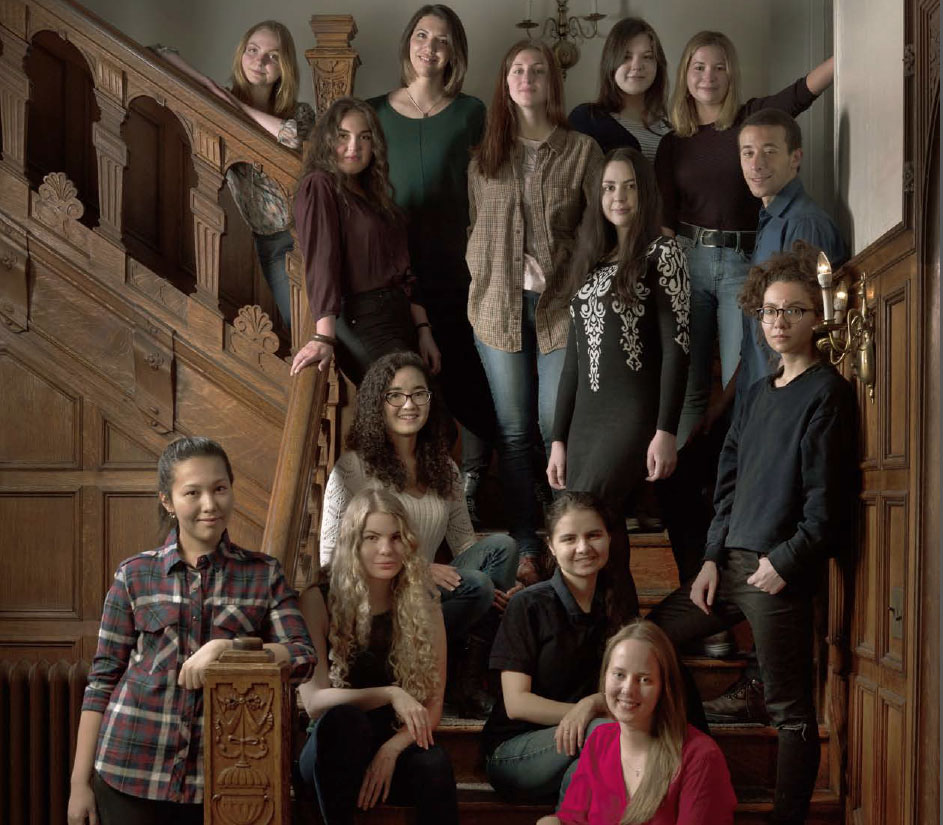 Any form of difference is considered a betrayal: whether it is an odd haircut or an ideology denouncing an existing status quo,” reads the application of Muntaha Abed, an Al-Quds Bard College for Arts and Sciences (AQB) student selected to join the Program in International Education, known as PIE, for the Spring 2014 semester. This young Palestinian woman, who in Annandale wore her hair short and adopted the Americanisms of her fellow Bardians, began her undergraduate studies at a huge Palestinian university where she felt “indoctrinated, asked to memorize information to rewrite on an exam.” She visited classes at Al-Quds Bard, then transferred there.

During her semester at Bard, Abed studied contemporary American literature, Gender and Sexuality in Muslim Society, and Philosophy of Nietzsche. For her, reverse culture shock was harder than living as an American college student. “I think about my PIE experience and the amazing work students do back there, and the opportunities they’re showered with, and then coming back here to all the disappointments.” Since her time in Annandale she has begun to defy “the rules of conformity and strictness” in her home culture: “PIE helped me form my own identity and accept the identities of others.” Abed was recently accepted to the master’s program in gender and sexuality at the University of London.

This year PIE celebrates its 25th year of bringing young people from countries in conflict or transition to Bard College for an intensive semester on an American campus. Applications are read by a team of reviewers at Bard’s Institute for International Liberal Education (IILE) and Center for Civic Engagement (CCE). In total, five students from Al-Quds Bard, 10 from the American University of Central Asia (AUCA), 32 from the Faculty of Liberal Arts and Sciences, St. Petersburg State University (Smolny College), and two Kellner scholars from Hungary will have spent a term during the 2015–16 academic year in Annandale or at the Bard Globalization and International Affairs (BGIA) Program in New York City.

For many of these students, PIE provided the first chance to see their homelands through the lens of another culture. “Being at Bard was a life changer,” says Tim Lai of South Africa, PIE ’12. “After living so openly as a gay man in America, I knew that things back home had to change, that I could not go back into the closet.” Lai is preparing for graduate school in the United States.

Abed and Lai are just two of more than 400 students, citizens of 37 countries, who have participated in PIE since 1991. It all started in May 1990, soon after the November 1989 fall of the Berlin Wall, when Bard held a conference, “The Recovery of Memory: Eastern Europe and the Question of Nationalism,” which included intellectuals, artists, and policy makers from Hungary, Poland, Czechoslovakia, Romania, the Soviet Union, Yugoslavia, and East Germany, as well as the United States and Canada. One result of the conference was the decision to establish an undergraduate exchange program with a focus on democratization. The idea was to introduce bright young people from “countries in transition” to American political and social systems, while simultaneously learning from the students’ experiences in nations where the struggle for democracy was still being waged. Students were required to take a seminar on an aspect of democratization; topics included nationalism and human rights, with courses offered by the Anthropology, Historical Studies, Literature, and Political Studies Programs, among others.

Twenty-five years later, the program has evolved. PIE still anchors the work of IILE, founded in 1998 by Susan Gillespie, now vice president for special global initiatives. It has the generous support of Jim and Mary Ottaway, George and Bicky Kellner, and Felicitas S. Thorne, among others. “Mary and I had met two leading Czechoslovak dissidents for whom we named the Jiri Hanzelka and Milan Simecka PIE Scholarships, which we funded for 17 years,” says Ottaway, a Bard life trustee. “Hanzelka, a Czech, and Simecka, a Slovak, both came to that 1990 conference at Bard. We admired them for their moral courage, and we remained good friends until their deaths.” Adds Thorne, “To meet the students and experience their enthusiasm and aptitude has been inspiring. Under the umbrella of CCE, I have seen these seeds flourish in many ways.”

In the early years, PIE focused on students from Eastern and Central Europe, who came to Bard for a year. Perhaps most transformative for those students was the experience of liberal arts education, with its student-centered pedagogy, multidisciplinary approach, and permission to take courses in subjects outside an area of specialization—options not initially available at the students’ home universities. Pavol Szalia of Slovakia, PIE ’06, who works at the Ministry of Foreign Affairs in Bratislava, studied art history and political studies at Bard, and remembers the impact of being in classes with students from highly industrialized nations alongside those from developing economies: “Bard provided depth and perspective to my education. I learned to think about issues from more than one point of view.”

PIE students also learn about American life from Bard faculty, staff, and donors who actively ensure that they are exposed to a range of social as well as academic activities. Camelia Isaic of Romania, PIE ’99, recounts, “My experience at Bard taught me about the individual responsibilities, in addition to the rights, that come along with democracy. It allowed me to experience being part of a minority group. It helped me understand my own biases and work toward overcoming them.” Isaic is the first PIE student to make a recurring gift to IILE in support of PIE.

The impact on the Bard community has been equally powerful. Nurzat Rakhmanberdieva of Kyrgyzstan, PIE ’13, attended Associate Professor of Computer Science and Mathematics Robert McGrail’s Programming Languages class. “Nurzat led a contingent of Bard women in computer science to attend the national Grace Hopper Celebration of Women in Computing in Minneapolis in 2013,” McGrail recalls. “And she secured a scholarship through Bard to return to the conference in 2014, but this time traveling from Bishkek.”

After it began, the program served students from South Africa, Zimbabwe, Cambodia, Afghanistan, Russia, the former Soviet republics, and the Balkan countries, through financial aid from individual donors, family foundations, and grant-making institutions. Major support came from the Open Society Foundations, whose assistance to student exchange programs was inspired in part by the Bard initiative. For several years, cooperation with the Institute of International Education allowed PIE to expand its reach, and the Harpswell Foundation supported students from Cambodia.

Four years ago, CCE Director Jonathan Becker, vice president for academic affairs, reframed PIE to focus mainly on students coming from Bard’s network of dual-degree partnerships. Students from partner institutions, including Smolny College, AUCA, and AQB, share the Bard experiences of the Language and Thinking Program, First-Year Seminar, Moderation, and Senior Project. Their familiarity with the basics of the Bard education allows PIE students to more easily adapt to, and benefit from, that education in Annandale; and students now spend a semester, rather than a year, at Bard—so that twice as many young people can participate. The program continues to foster dialogue across backgrounds. Ottaway recalls, “One consequence of PIE was conversations with American students who had never met anyone their age who had grown up under communism.” Recently, a group of PIE students visited Bard High School Early College in Queens, where they joined discussions about conservatism in Western European and American politics, as well as in their own countries. This fall, PIE students will observe American elections and analyze the American democratic process. In turn, PIE alumni/ae return home to share their cultures with Bard students who study abroad in Kyrgyzstan, Russia, Germany, or the West Bank.

Serensamuu Budatsyrenov, PIE ’15, is from the Russian republic of Buryatia in eastern Siberia. While at BGIA, she completed an internship with the PEN American Center, which defends embattled writers worldwide. “Coming from Russia and frequently experiencing issues of falsified materials, I gained important skills,” she says. Her concerns range from freedom of expression to the fate of ethnic minorities, who, in Buryatia, “face significant problems with keeping their identity, culture, and language.” She will complete her degree in international relations at Smolny College.

As PIE celebrates its 25th anniversary in October, the Program in International Education and Social Change (PIE-SC) will launch at Bard College Berlin. The emphasis will remain on students from nations now experiencing conflict and transition, beginning with Greece, Syria, Ukraine, and the Roma community. The upcoming reunion offers a chance for all Bard families to meet PIE students and alumni/ae, and learn more about the ways in which Bard’s international network brings the world to Annandale.