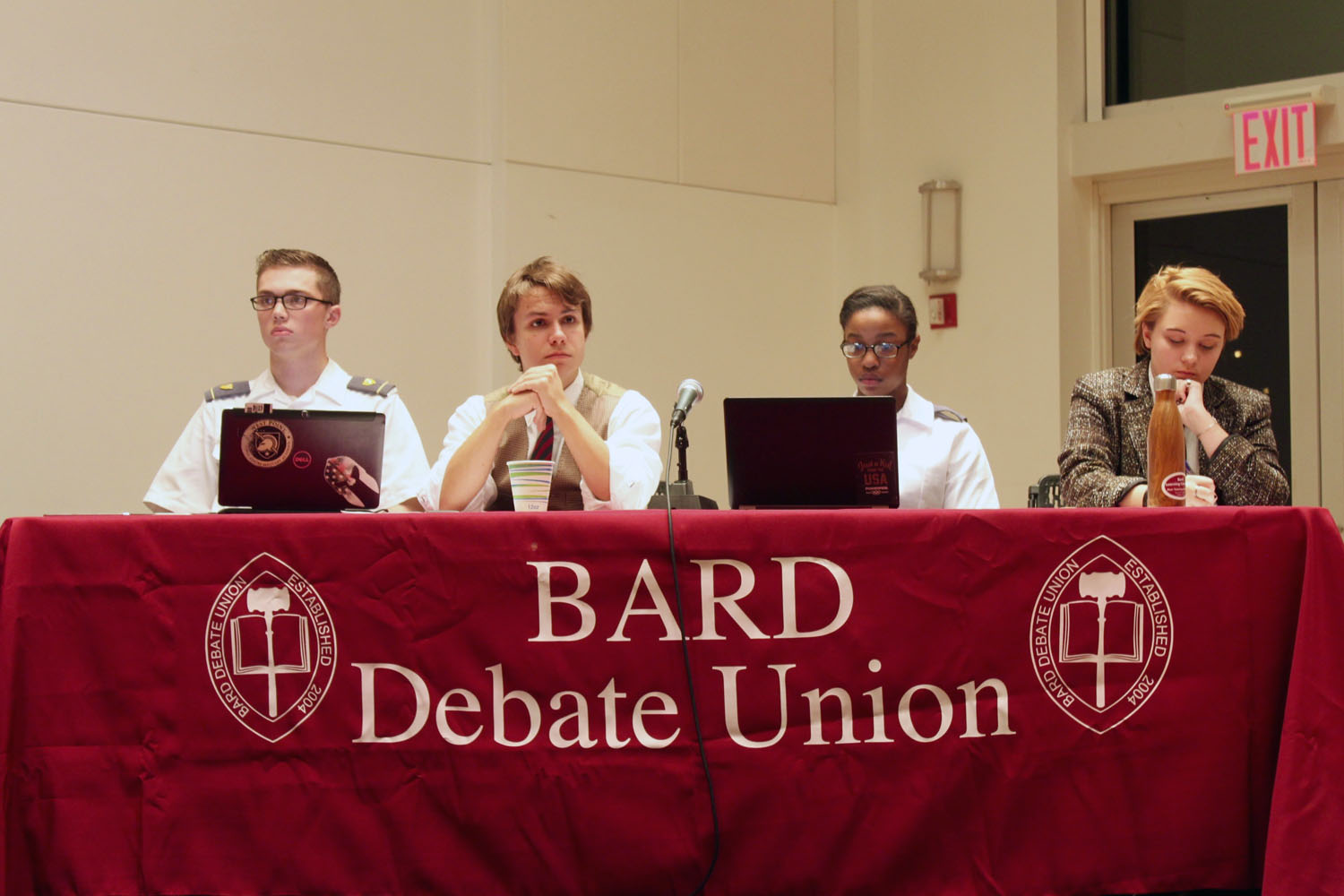 West Point cadets and students in the Bard Debate Union compete on mixed teams in a debate on safe space rhetoric on college campuses. Photos by Sarah Wallock '19. The debate featured members of the Bard Debate Union and the debate team from the United States Military Academy at West Point. The Bard students and West Point cadets competed on mixed teams, with each team consisting of two members from each institution. Sponsored by the Hannah Arendt Center, the Bard Debate Union, the West Point–Bard Exchange, and the Bard Center for Civic Engagement, this debate was the opening event of this year’s Hannah Arendt Center Conference, “Real Talk: Difficult Questions about Race, Sex and Religion,” taking place October 20–21 in Olin Hall.

The debate proved to be a thoughtful, engaging, and deeply responsive event in which all eight speakers presented researched and evidenced arguments about the values and harms of the increasing focus on safe spaces on college campuses. More than 100 people attended the event. There was active audience participation during a 30-minute question and answer period, during which students spoke about their own experience with the topic, showing a range of viewpoints and strong engagement with the issue. The audience was polled on the debate topic before and after the event. While the vote before the debate showed the audience in favor or safe spaces, the debate shifted many minds, and the side against safe spaces won the vote at the conclusion of the debate. “It was a pleasure to host West Point for this debate on a very timely topic,” said Ruth Zisman, term assistant professor of social studies and faculty advisor to the Bard Debate Union. “Debates like this one are a testament to the value of public debate. It allowed a large number of students, faculty, and staff members to come together and discuss a very difficult topic (and a topic deeply personal for many) in a thoughtful, respectful, engaging way. To see two sides of an argument presented with equal amounts of research, articulation, and passion helps people to question their own convictions and to think through topics that might otherwise be clouded by ideology and personal bias.”

The Bard Debate Union, founded in 2004, promotes the values of civic discourse, dialogue, and debate throughout the Bard College community and the Hudson Valley region. The team competes at the highest levels of college debate, traveling every year to intercollegiate tournaments at colleges and universities throughout the United States. The team also hosts several public debates, debate workshops, and lectures (all open to the public) every semester, and is involved in several outreach projects in the local Red Hook school district, the Bard High School Early Colleges, and the Bard Prison Initiative.