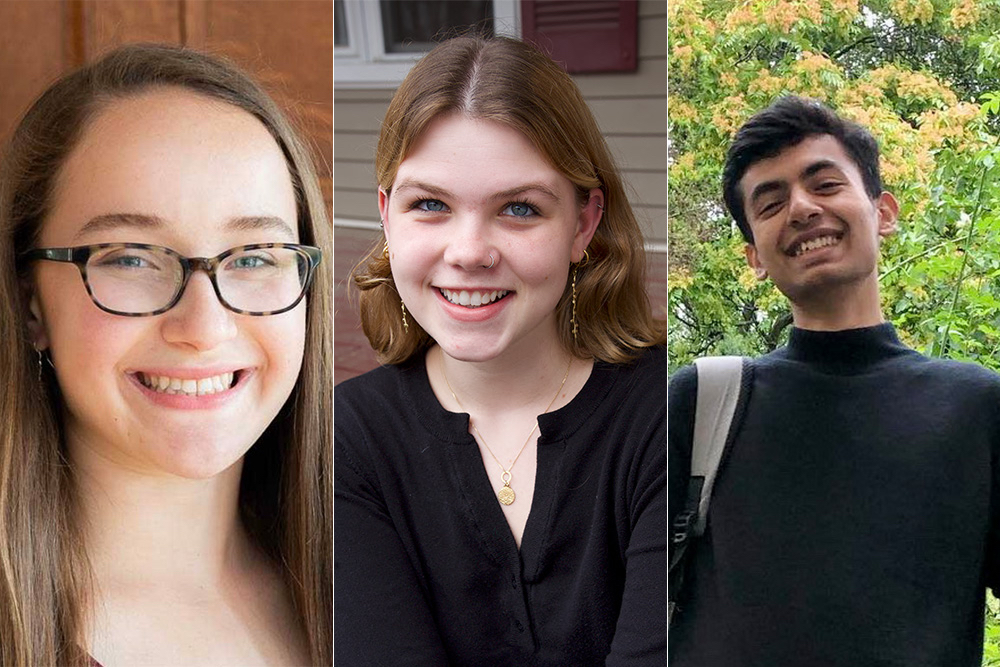 L-R: The Margarita Kuchma Project Award winners Anna Shupack ’22, Sarah Soucek ’22, and Abdullah Naseer BCB ’23.
The Margarita Kuchma Project Award selection committee has named two final winning projects. Anna Schupack ’22 and Sarah Soucek ’22 from Bard’s Annandale campus won for their project, “The Columbia Collective,” a multimedia arts mentorship collective where incarcerated artists are given the opportunity to define their own voices. Michael Nyakundi ’23 and Abdullah Naseer ’23 from Bard College Berlin also won for their project, “Project MA3: Masanse Na Mayouthman (From Violence to Co-existence),” which focuses on community engagement as a working solution to police brutality in Soweto slums in Embakasi, Nairobi. The two winners will split the $10,000 award to realize their projects over their proposed timelines. The results of the winning projects will be presented to the Bard community in a public presentation sometime during the fall 2022 semester.

“We want to collaborate with high school and college-age incarcerated women and non-binary individuals at the maximum detention center, Brookwood Secure Center for Youth (formerly titled the Columbia Secure Center for Girls) near Hudson, in order to facilitate an exhibition of their artwork at the Foreland Contemporary Arts Campus in Catskill, New York, and to catalyze the formation of an ongoing multimedia arts mentorship collective called the Columbia Collective.” write Anna Schupack and Sarah Soucek. “We want the public to see the other side of their stories. The stories are not heard or seen in the courtroom. We hope to mobilize a network in support of prison abolition for youth in NY and to build a community of mentorship with incarcerated youth that will foster resiliency and collaboration, eliminate recidivism, and build a pipeline to higher education and the professional arts community.”

Michael Nyakundi and Abdullah Naseer write, “Most solutions to police brutality have involved the often-lengthy process of bringing police to justice through jurisprudence, or, as is the case in the US, demanding for the defunding of police. While these solutions are salient, they rarely mend the bad blood/fears between police and the youth.” Their project introduces a workshop where police representatives and youth representatives (a) have a dialogue about ways in which they both can civically engage/communicate in order to promote conviviality and (b) go through various restorative justice measures the police can explore when dealing with crime. They will also organize a community engagement endeavor, such as rubbish collection or a soccer tournament, in which both the police and the youth would engage to further cement a cordial relationship. Further, they plan to lobby members of parliament to promote police and youth engagement in my Soweto slums.

The award winners were decided through a multi-step process. Twenty-five applicants submitted project proposals in an open call round. Five projects were selected to advance to a second round and given an award of $1000 and another month to conduct research and identify partners and materials needed to realize the project. Two finalists were selected from this stage and awarded a further $5000 to create a detailed project activation blueprint and timeline. Both finalists were named winners and split the final $10,000 award to realize their projects.

The five second round winners included: Sonita Alizada ’23 from Bard’s Annandale campus and Ghulam Sakhi Ataye ’23 from American University of Central Asia–Bard in Bishkek, Kyrgyz Republic for their projects, “Freedom to Learn: Online Higher Education for Afghan Girls” and “Afghan Girls Education Program,” which both aim to provide a viable pathway for Afghan girls and women to pursue higher education in the wake of the Taliban takeover; Shadin Nassar ’21 and Ramez Hayek ’23 from Al-Quds Bard College for their project “Written Voices,” which seeks to construct a much-needed safe outlet that solidifies the Palestinian struggle for justice through distinctive methods empowering artistic self-expression and critical inquiry; Clay Davies ’22 from Bard’s Annandale campus for his/her/their site-specific project to transport Disabled people in Humboldt County, California, to a center of community arts engagement in the town of Arcata where as a group they could participate in summer learning and adapting various studio art fabrication practices, such as concrete pouring, large scale knotting/knitting/crocheting with rope, paper mache, block printing, and other sculptural techniques.