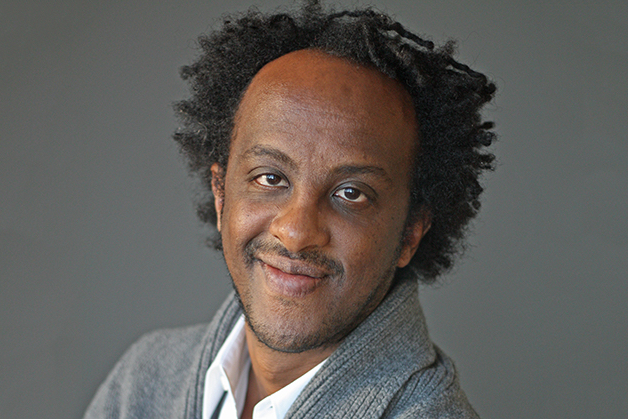 Dinaw Mengestu, photo by Michael Lionstar
Bard College announces the appointment of esteemed writer Dinaw Mengestu as John D. and Catherine T. MacArthur Professor in the Humanities, effective spring 2021. Mengestu, a recipient of the 2012 MacArthur Foundation Award, is director of the Written Arts Program at Bard. He is the author of three novels: The Beautiful Things That Heaven Bears (2008), How to Read the Air (2010), and All Our Names (2014). For more information about Bard’s Written Arts Program, please visit writtenarts.bard.edu.

“A writer of extraordinary accomplishment and humanity, Dinaw Mengestu has brought signal openness, growth, and energy to the Written Arts Program at Bard since his arrival in 2016,” said Bard’s Dean of the College, Deirdre D’Albertis.

Dinaw Mengestu, a recipient of the 2012 MacArthur Foundation Award, was born in Ethiopia and raised in Illinois. His fiction and journalism have been published in the New Yorker, Granta, Harper’s, Rolling Stone, and New York Times. Mengestu was chosen for the 5 under 35 Award by the National Book Foundation and was named on the New Yorker’s “20 under 40” list in 2010. He is also the recipient of a Lannan Fiction Fellowship, The Guardian First Book Award, the Los Angeles Times Book Prize, among other awards. He is the author of three novels: The Beautiful Things, That Heaven Bears (2008), How to Read the Air (2010), and All Our Names (2014). His work has been translated into more than fifteen languages. Mengestu has a BA from Georgetown University and an MFA from Columbia University. He has been at Bard since 2016.

About Bard College
Founded in 1860, Bard College is a four-year residential college of the liberal arts and sciences located 90 miles north of New York City. With the addition of the Montgomery Place estate, Bard’s campus consists of nearly 1,000 parklike acres in the Hudson River Valley. It offers bachelor of arts, bachelor of science, and bachelor of music degrees, with majors in nearly 40 academic programs; graduate degrees in 11 programs; eight early colleges; and numerous dual-degree programs nationally and internationally. Building on its 160-year history as a competitive and innovative undergraduate institution, Bard College has expanded its mission as a private institution acting in the public interest across the country and around the world to meet broader student needs and increase access to liberal arts education. The undergraduate program at our main campus in upstate New York has a reputation for scholarly excellence, a focus on the arts, and civic engagement. Bard is committed to enriching culture, public life, and democratic discourse by training tomorrow’s thought leaders. For more information about Bard College, visit bard.edu.
# # #
12/17/20