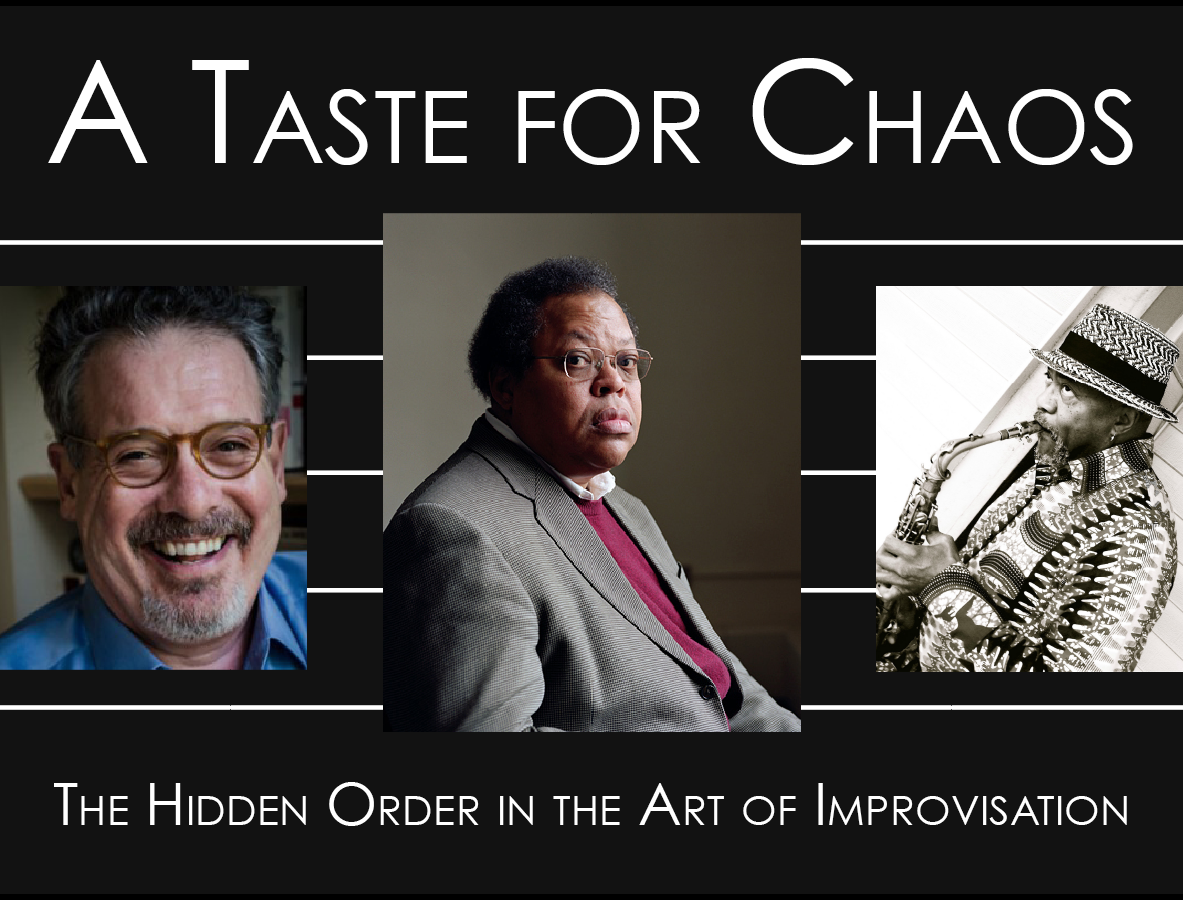 A Taste for Chaos: The Hidden Order in the Art of Improvisation

Monday, February 15, 2016
Bitó Conservatory Building
5:00 pm – 7:00 pm EST/GMT-5
On Monday, February 15, 2016 the Hannah Arendt Center, Music Program, Bard College Conservatory of Music, Office of Development and Alumni/ae Affairs and Language & Literature Program will host "A Taste for Chaos: The Hidden Order in the Art of Improvisation. Special Guests include: Composer, George Lewis and author of A Taste for Chaos: The Art Of Literary Improvisation, Randy Fertel, and Oliver Lake.

The Oxford English Dictionary defines improvisation as a “work or structure produced on the spur of the moment.” But this is not quite right. Improvisation, writes Randy Fertel,"claims to be spontaneous, off the cuff, uncrafted, careless, inspired, chaotic.” But beyond these claims, improvisation follows an unbending order. This has been true since Plato, who wrote, "all the good poets use no art at all, but they are inspired and possessed when they utter all these beautiful poems… Beautiful poems are not human, not made by man, but divine and made by God: and the poets are nothing but the gods’ interpreters.” For millennia, art has imagined that poetic improvisation was free, but also guided by a hidden logic. Jazz, writes Ralph Ellison, "springs from a contest in which each artist challenges all the rest; each solo flight, or improvisation, represents…a definition of his identity as individual, as member of the collectivity and as a link in the chain of tradition. Thus, because jazz finds its very life in an endless improvisation upon traditional materials, the jazzman must lose his identity even as he finds it.” Improvisation situates music in a productive tension between individual freedom and sentient order. Freedom as an aspect of improvisation means that individuals are free only insofar as they act in ways that are both free and constrained. This is very much what Hannah Arendt means when she writes that "Men are free—as distinguished from their possessing the gift of freedom— as long as they act, neither before nor after; for to be free and to act are the same.” In this evening on "A Taste for Chaos: The Hidden Order in the Art of Improvisation,” we bring together leading thinkers and musicians to explore the nature of improvisation and the arts of freedom.

Randy Fertel holds a Ph.D. in English and American literature from Harvard University, where he received a student-voted teaching award. He has taught English at Harvard, Tulane, LeMoyne College, and the New School for Social Research. He specializes in the literature of the Vietnam War and the literature of exile. Fertel is president of the Fertel Foundation and co-founded, with the Nation Institute, the Ridenhour Prizes for Courageous Truth-Telling, named for My Lai whistleblower and investigative reporter Ron Ridenhour. He lives in New Orleans and New York.

George E. Lewis is the Edwin H. Case Professor of American Music at Columbia University. A fellow of the American Academy of Arts and Sciences, Lewis’s other honors include a MacArthur Fellowship (2002) and a Guggenheim Fellowship (2015). A member of the Association for the Advancement of Creative Musicians (AACM) since 1971, Lewis’s creative work has been presented by the BBC Scottish Symphony Orchestra,  Radio-Sinfonieorchester Stuttgart, International Contemporary Ensemble, and others. His widely acclaimed book, A Power Stronger Than Itself:  The AACM and American Experimental Music (University of Chicago Press, 2008) received the American Book Award, and in 2015, Lewis received the degree of Doctor of Music from the University of Edinburgh.  Lewis and Benjamin Piekut are co-editors of the forthcoming two-volume Oxford Handbook of Critical Improvisation Studies (2016).

Oliver Lake Renowned saxophonist, composer, painter and poet Oliver Lake’s half century-long career is unparalleled. From collaborations with the Brooklyn Philharmonic, Flux String Quartet, Bjork, Lou Reed, A Tribe Called Quest, Mos Def and Me’shell Ndegeocello, to his co-founding of the Black Artist Group (BAG) and the highly acclaimed World Saxophone Quartet, creation of his non-profit Passin’ Thru organization, becoming a mainstay with Pittsburgh’s City of Asylum, publishing two books of poetry and frequently having original artwork displayed in exhibitions across the country, Oliver Lake views it all as part of the same whole.

Location: László Z. Bitó '60 Conservatory Building : MAP
Parking is available in the rear of the building in the Avery/Blum Parking Lot.
Date: February 15th
Free & Open to the Public