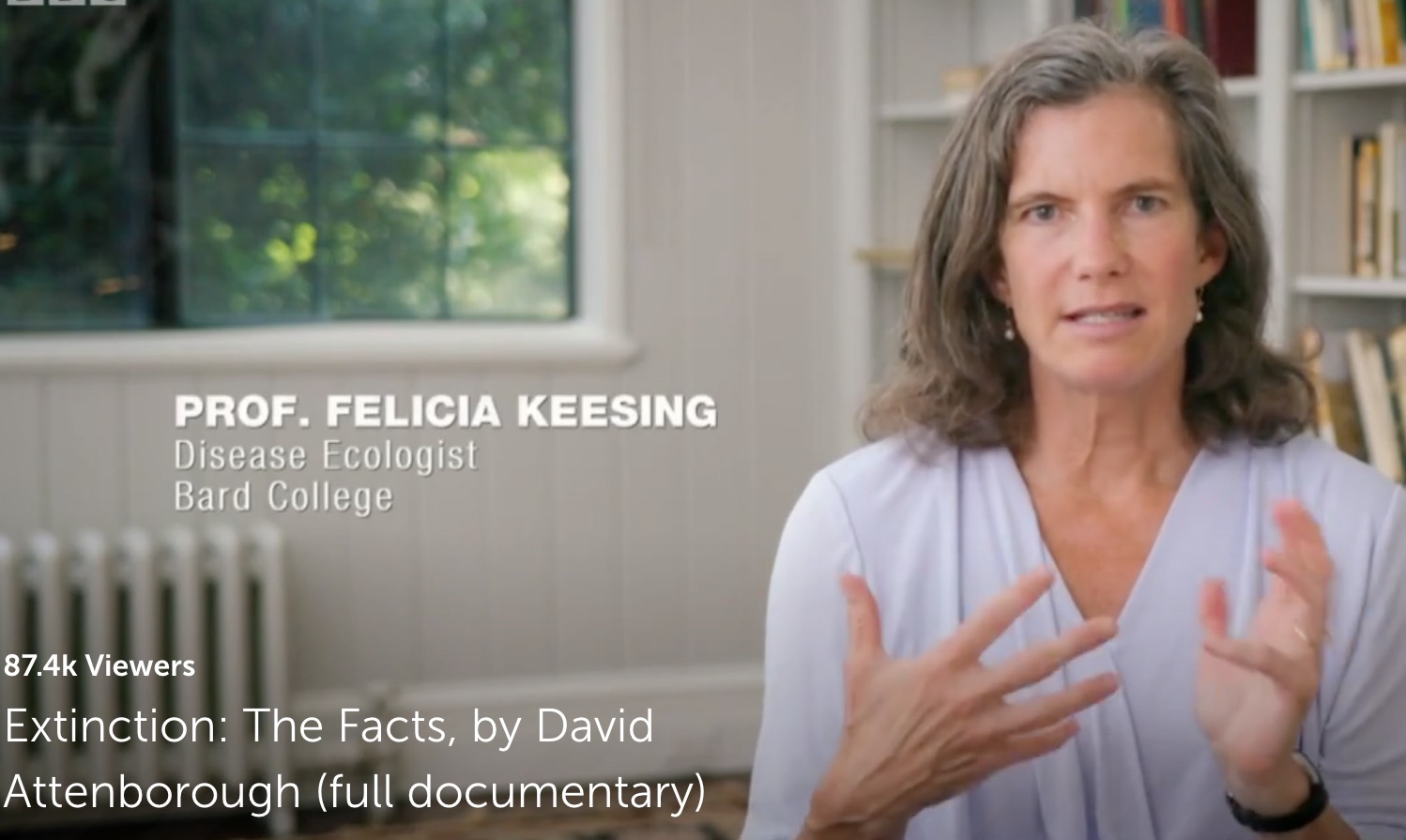 On March 31, EXTINCTION – THE FACTS, Sir David Attenborough’s documentary exploring the extinction crisis and its consequences, premieres on PBS. The program features interviews with Bard College Biology Professor Felicia Keesing and other leading scientists discussing the extinction crisis, and its grave consequences for us all—threatening food and water security, reducing our ability to control our climate, and putting us at greater risk of deadly pandemic diseases, including COVID-19.

“We have a moment when we can change our world and make it better,” says Keesing in the documentary. “Often the best reservoirs for the pathogens that can jump to humans are smaller-bodied species, like rats and mice and certain kinds of bats. When we have intact natural systems with high biodiversity, these species are kept in check, but when humans destroy habitat, the large predators and herbivores disappear first. Which means the smaller-bodied species are the big winners. They proliferate wildly, they live at super high density and are the ones far more likely to make us sick.”

EXTINCTION – THE FACTS reveals what is happening to the natural world, how human activity drives extinction, and why we haven’t acted sooner to stem these losses. With the world at a critical turning point, the documentary asks what governments, industries, and individuals can do now to change our course. EXTINCTION – THE FACTS premieres Wednesday, March 31, from 8:00-9:00 p.m. ET. For more information or to view the documentary, please visit pbs.org/show/extinction-facts.

Felicia Keesing, David and Rosalie Rose Distinguished Professor of Science, Mathematics, and Computing, has been on the Bard faculty since 2000. She has a B.S. from Stanford University and a Ph.D. from the University of California, Berkeley. Since 1995, she has studied how African savannas function when the large, charismatic animals like elephants, buffaloes, zebras, and giraffes disappear. She also studies how interactions among species influence the probability that humans will be exposed to infectious diseases. Keesing also studies Lyme disease, another tick-borne disease. She is particularly interested in how species diversity affects disease transmission. More recently, she has focused on science literacy for college students, and she led the re-design of Bard College’s Citizen Science program. Keesing has received research grants from the National Science Foundation, National Geographic Society, National Institutes of Health, Environmental Protection Agency, and Howard Hughes Medical Institute, among others. She has been awarded the United States Presidential Early Career Award for Scientists and Engineers (2000). She is the coeditor of Infectious Disease Ecology: Effects of Ecosystems on Disease and of Disease on Ecosystems (2008) and has contributed to such publications as Nature, Science, Proceedings of the National Academy of Sciences, Ecology Letters, Emerging Infectious Diseases, Proceedings of the Royal Society, Ecology, BioScience, Conservation Biology, and Trends in Ecology & Evolution, among others.
# # #
(3.29.21)