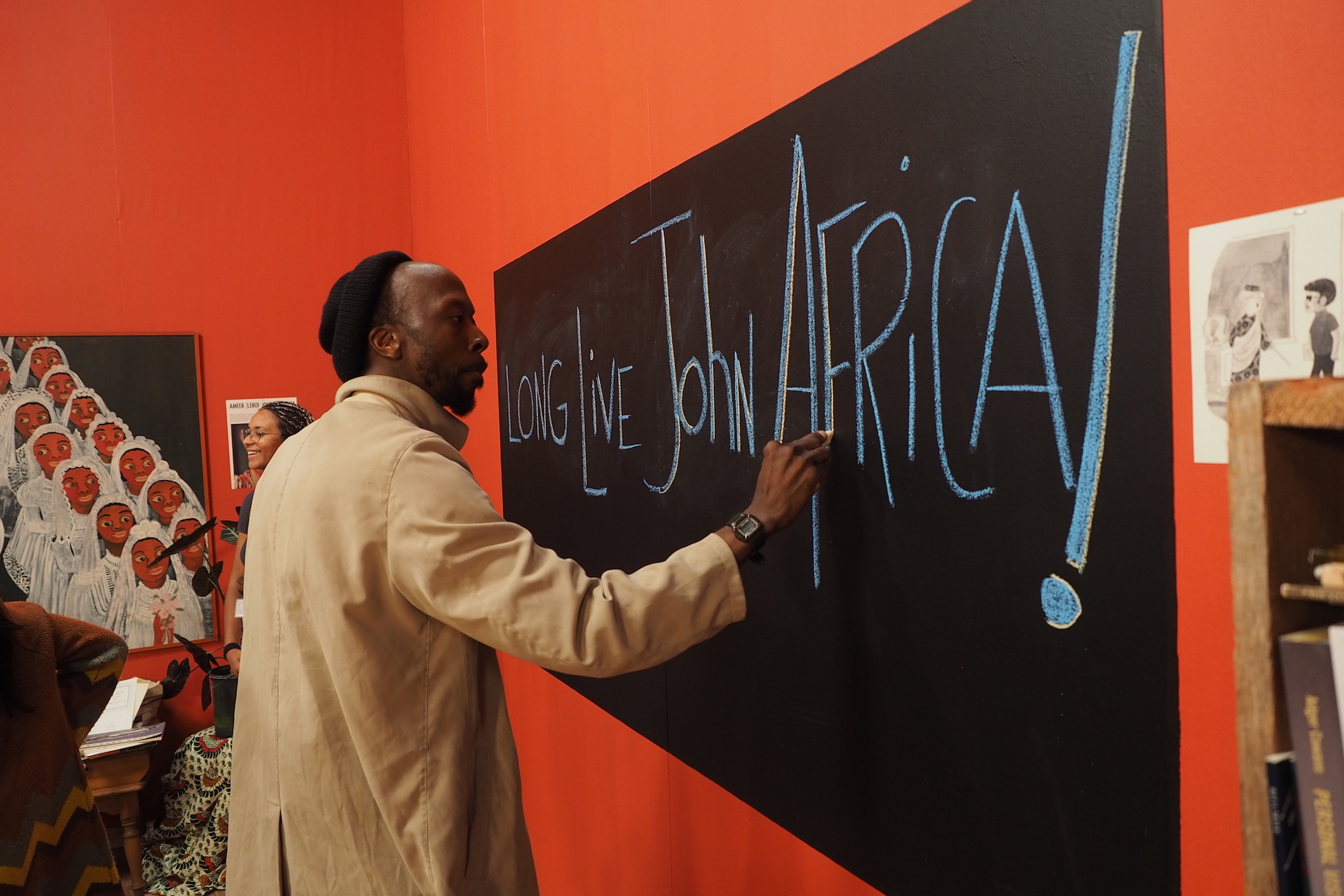 “We are delighted and impressed that so many Bard MFA alums and faculty have been named 2021 Guggenheim Fellows,” said Hannah Barrett, director of the Milton Avery Graduate School of the Arts. “The Milton Avery School for the Arts wishes to congratulate these faculty and alumni on their 2021 Guggenheim awards. Their recognition is richly deserved and we will follow their careers with pride and admiration.”

“As an experimental filmmaker, our colleague Ephraim Asili has won critical acclaim for The Diaspora Suite (2017), an ambitious cycle of 16 mm short films, and most recently his feature-length The Inheritance (2020), a poetic meditation on history, politics, art, and Black liberation,” said Bard’s Dean of the College, Deirdre d’Albertis. “Asili's presence on the faculty of Bard’s Film and Electronic Arts Program represents for our students both deep continuity with Bard's storied past as a haven for artistic experimentation and a stunningly contemporary approach to documentary and narrative with full awareness of the urgency of our present moment.”

“I am thrilled to announce this new group of Guggenheim Fellows,” said Edward Hirsch, president of the Guggenheim Foundation, “especially since this has been a devastating year in so many ways. A Guggenheim Fellowship has always been meaningful, but this year we know it will be a lifeline for many of the new Fellows at a time of great hardship, a survival tool as well as a creative one. The work supported by the Fellowship will help us understand more deeply what we are enduring individually and collectively, and it is an honor for the Foundation to help them do what they were meant to do.”

Created in 1925 by Senator Simon and Olga Guggenheim in memory of their son John Simon Guggenheim, the Guggenheim Foundation has offered fellowships to exceptional individuals in pursuit of scholarship in any field of knowledge and creation in any art form, under the freest possible conditions. The great range of backgrounds, fields of study, and accomplishments of Guggenheim Fellows is a unique characteristic of the Fellowship program. In all, 49 scholarly disciplines and artistic fields, 73 different academic institutions, 28 states and two Canadian provinces are represented in this year’s class of Fellows, who range in age from 31 to 85. Close to 60 Fellows have no full-time college or university affiliation. Since its establishment in 1925, the John Simon Guggenheim Memorial Foundation has granted nearly $400 million in Fellowships to over 18,000 individuals, among whom are more than 125 Nobel laureates, members of all the national academies, winners of the Pulitzer Prize, Fields Medal, Turing Award, Bancroft Prize, National Book Award, and other internationally recognized honors. For more information on the 2021 Fellows, please visit the Foundation’s website at gf.org.

Roberto Tejada, Bard MFA writing faculty, is the author of poetry collections Full Foreground (Arizona, 2012), Exposition Park (Wesleyan, 2010), Mirrors for Gold  (Krupskaya, 2006), Todo en el ahora (Libros Magenta, 2015), selected poems in Spanish translation, and a LatinX poetics of the Americas, Still Nowhere in an Empty Vastness (Noemi, 2019). He is the author of art histories that include National Camera: Photography and Mexico’s Image Environment (Minnesota, 2009), Celia Alvarez Muñoz (Minnesota, 2009), and with Michelle White and others the co-author of Allora & Calzadilla: Specters of Noon (Yale, 2021) He is the Hugh Roy and Lillie Cranz Cullen Distinguished Professor in Creative Writing and Art History at the University of Houston.

A.K. Burns MFA ’10, Bard MFA film & video faculty, is an interdisciplinary artist who views the body as a contentious domain wherein issues of gender, labor, ecology and sexuality are negotiated. Burns is currently producing Negative Space, a cycle of video-installations that take speculative fiction as a point of departure. The opening episode, A Smeary Spot (2015) debuted at Participant Inc., NY, followed by an exhibition at Portland Institute for Contemporary Art, OR, in 2016. The second in this series, titled Living Room (2017) debut at the New Museum, and was subsequently exhibited at Institute of Contemporary Art, Philadelphia in 2018. Additionally in 2018 Burns exhibited a new video work titled Survivors Remorse (2018) at the Harvard Museum and a public sculpture The Dispossessed (2018) at the FRONT International Cleveland Triennial. As a frequent collaborator and advocate for labor issues in the Arts, Burns was a founding member of W.A.G.E (Working Artists in the Great Economy) in 2008. Burns’ works can be found in public collations including the Museum of Modern Art, NY and Los Angeles County Museum of Art, CA. Burns was also a 2018 NYFA Fellow in Interdisciplinary Arts, a 2016-17 Radcliffe Fellow at Harvard University as well as a recipient of a 2015 Creative Capital Foundation Visual Arts Award.

Irene Lusztig MFA ’06 is a filmmaker, visual artist, and archival researcher. She is a professor, Film & Digital Media, and director, Center for Documentary Arts & Research (CDAR), at the University of California, Santa Cruz, Her film and video work mines old images, technologies, and objects for new meanings in order to reanimate forgotten and neglected histories. Often beginning with rigorous research in archives, her work brings historical materials into conversation with the present day, inviting viewers to explore historical spaces as a way to contemplate larger questions of politics, ideology, and the production of personal, collective, and national memories. Much of her work is centered on public feminism, language, and histories of women and women’s bodies, including her debut feature Reconstruction (2001), the feature length archival film essay The Motherhood Archives (2013), the ongoing web-based Worry Box Project (2011), and her newest performative documentary feature Yours in Sisterhood (2018). Her work has been screened around the world, including at the Berlinale, MoMA, Film Society of Lincoln Center, Museum of Fine Arts Boston, Anthology Film Archives, Pacific Film Archive, Flaherty NYC, IDFA Amsterdam, Hot Docs, AFI Docs, and RIDM Montréal, and on television in the US, Europe, and Taiwan. She has received grants from the Massachusetts Foundation for the Humanities, Massachusetts Cultural Council, LEF Foundation, New York State Council for the Arts, and Sustainable Arts Foundation and has been awarded fellowships at the MacDowell Colony, the Flaherty Film Seminar, the Radcliffe Institute for Advanced Study, and Harvard’s Film Study Center. She was the 2016-17 recipient of a Rydell Visual Arts Fellowship and a Fulbright Fellowship in Portugal.

Luba Drozd MFA ’15 is an interdisciplinary multimedia artist. She earned a BFA from Pratt Institute and an MFA from Bard College. Her films and installations articulate the absurd in the established exploitative social structures and demonstrate how the systems of control are manifested and echoed in restrictive architectural environments. Luba’s works screened at Smack Mellon, Apexart, Anthology Film Archives, the New York Video Festival at Lincoln Center and Art in General. She is a 2015 Media Arts fellow at BRIC in Brooklyn, NY. In 2020, Drozd was featured by the New York Post as “hero of the day” and highlighted in the New York Times for her work making and distributing face shields for hospital workers in the early weeks of the pandemic. Drozd is a recipient of the 2020 NYSCA/NYFA Artist Fellowship in Digital/Electronic Arts. Her two-room site specific sound, sculpture, and 3D animation installation piece, “The Aesthetic Limits of Water,” was commissioned and exhibited by the Hessel Museum in 2020.

About Bard College
Founded in 1860, Bard College is a four-year residential college of the liberal arts and sciences located 90 miles north of New York City. With the addition of the Montgomery Place estate, Bard’s campus consists of nearly 1,000 parklike acres in the Hudson River Valley. It offers bachelor of arts, bachelor of science, and bachelor of music degrees, with majors in nearly 40 academic programs; graduate degrees in 11 programs; eight early colleges; and numerous dual-degree programs nationally and internationally. Building on its 161-year history as a competitive and innovative undergraduate institution, Bard College has expanded its mission as a private institution acting in the public interest across the country and around the world to meet broader student needs and increase access to liberal arts education. The undergraduate program at our main campus in upstate New York has a reputation for scholarly excellence, a focus on the arts, and civic engagement. Bard is committed to enriching culture, public life, and democratic discourse by training tomorrow’s thought leaders. For more information about Bard College, visit bard.edu.
# # #
(4/09/21)