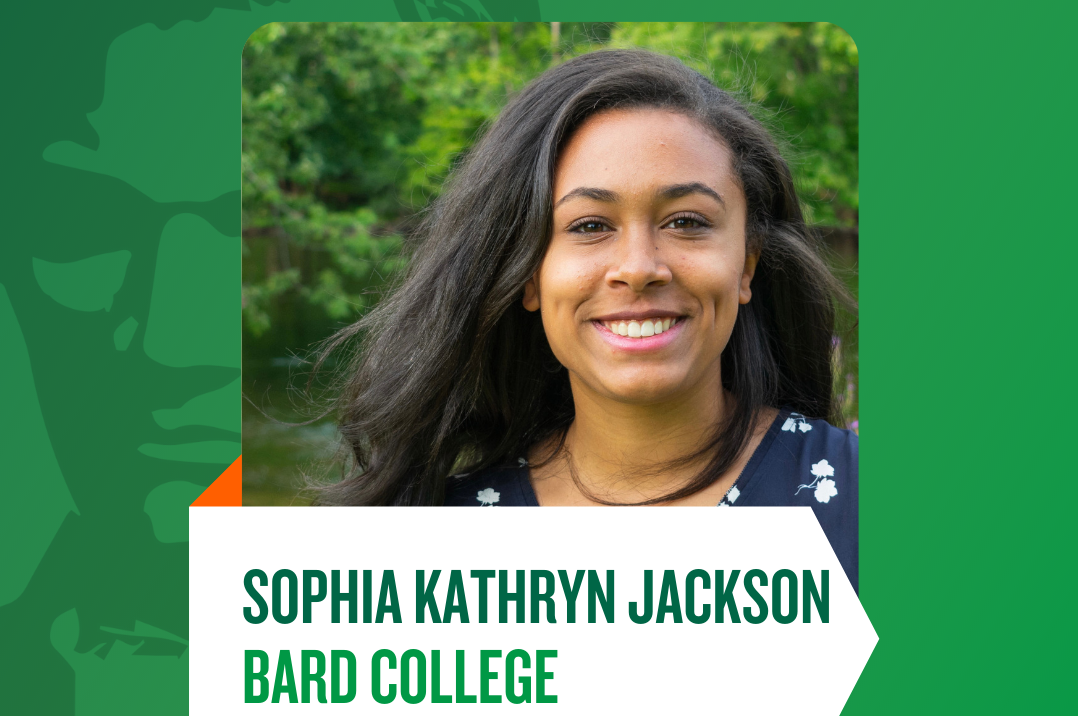 “You will create friendships around the globe as an extension of the work we do as a country to inspire and to work on and to build on the friendships we have around the world,” said Vice President Harris. “Many of you know that I attended Howard University, a school that was founded at a time when few recognized the potential of Black students to be leaders. At HBCUs, and at fellowship programs like this, students of color are prepared to lead. Like Frederick Douglass in Ireland, you can come as you are, and you can leave who you aspire to be.”

A double major in biology and music performance, Jackson was selected as a Frederick Douglass Global Fellow because of her academic excellence, communication skills, and commitment to social justice. A highlight of Sophia’s service to her community is the Music Mentorship Initiative, a program she cofounded, through which she and other undergraduate musicians provide free private music instruction over Zoom for students who could not otherwise afford lessons. Jackson anticipates her time in Dublin will be transformative. “Growth is a byproduct of being exposed to new and uncertain experiences,” she said in her application video. “Being confronted with the challenges of being in a new place and being able to work through them with the perspectives of my cohort will lead to the start of a growth that I envision will continue to bloom throughout my collegiate years and influence my service-based path.”

Ireland’s Department of Foreign Affairs will co-sponsor the 2021 Frederick Douglass Global Fellows in Dublin, Ireland, to honor the 175th anniversary of the meeting between 27-year-old abolitionist Frederick Douglass and the Irish reformer Daniel O’Connell in Dublin in 1845.

“I was delighted to join Vice President Harris this morning in meeting these exceptional young people,” said Prime Minister Martin. “Frederick Douglass has a vital and valued legacy on either side of the Atlantic and my Government is delighted to mark the 175th anniversary of his historic tour of Ireland by welcoming 20 brilliant American students from minority backgrounds to follow in the great abolitionist’s footsteps and learn of the influential relationship between Daniel O’Connell and Frederick Douglass.”

In Ireland, Frederick Douglass Global Fellows will study leadership, effective communication, and strategies to affect positive social change as they explore the life stories and legacies of Frederick Douglass and Daniel O’Connell.

“It’s fitting that this diverse group of young people will have the opportunity to develop their leadership skills in a place so special to Frederick Douglass,” said Nettie Washington Douglass, chairwoman and co-founder of Frederick Douglass Family Initiatives, and the great-great-granddaughter of Frederick Douglass and great-granddaughter of Booker T. Washington. “The welcome and respect with which Frederick was greeted across his tour of Ireland affected him profoundly. I can think of no better place for future American leaders to gain a global perspective and prepare to be agents of change.”

About the Council on International Educational Exchange
CIEE, the country's oldest and largest nonprofit study abroad and intercultural exchange organization, transforms lives and builds bridges by promoting the exchange of ideas and experiences. To help people develop skills for living in a globally interdependent and culturally diverse world, CIEE sponsors a wide variety of opportunities for cultural exchange, including work exchange programs, teach abroad programs, and a worldwide portfolio of study abroad and internship programs for college and high school students. www.ciee.org.

About Bard College
Founded in 1860, Bard College is a four-year residential college of the liberal arts and sciences located 90 miles north of New York City. With the addition of the Montgomery Place estate, Bard’s campus consists of nearly 1,000 parklike acres in the Hudson River Valley. It offers bachelor of arts, bachelor of science, and bachelor of music degrees, with majors in nearly 40 academic programs; graduate degrees in 11 programs; eight early colleges; and numerous dual-degree programs nationally and internationally. Building on its 161-year history as a competitive and innovative undergraduate institution, Bard College has expanded its mission as a private institution acting in the public interest across the country and around the world to meet broader student needs and increase access to liberal arts education. The undergraduate program at our main campus in upstate New York has a reputation for scholarly excellence, a focus on the arts, and civic engagement. Bard is committed to enriching culture, public life, and democratic discourse by training tomorrow’s thought leaders. For more information about Bard College, visit bard.edu.
# # #
(3/17/21)