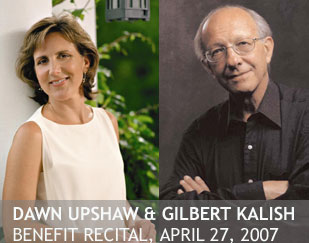 ANNANDALE-ON-HUDSON, N.Y.—“In today’s commercialized musical world, Dawn Upshaw is a voice apart. She’s one of music’s most celebrated sopranos, but with her calm radiance, you wouldn’t think of her as a diva. She has a passion for bringing surprising, and fascinating, music to the public,” writes Mary Kunz Goldman in the Buffalo News.

The Bard College Conservatory of Music presents a song recital with celebrated soprano Dawn Upshaw, artistic director of the Graduate Program in Vocal Arts at the Conservatory, and prominent pianist Gilbert Kalish, at Bard’s Fisher Center on Friday, April 27. The program begins at 7:00 p.m. in the Sosnoff Theater. Tickets are $55, $40, and $25. (Those age 62 and older are eligible for a 10 percent discount.)

Dawn Upshaw has achieved worldwide celebrity as a singer of opera and concert repertoire ranging from the sacred works of Bach to the freshest contemporary sounds. A three-time Grammy Award winner, she has premiered more than 40 works in the past decade and is featured on more than 50 recordings, including the million-selling Symphony No. 3 by Henryk Gorecki. At Bard College she is Charles Franklin Kellogg and Grace E. Ramsey Kellogg Professor of the Arts and Humanities. At the Bard Conservatory, she is director of the new Graduate Program in Vocal Arts.

Gilbert Kalish is a profoundly influential figure in American music. He was the pianist of the Boston Symphony Chamber Players for 30 years and a founding member of the Contemporary Chamber Ensemble. From 1969 to 1997, he was a faculty member of the Tanglewood Music Center; he was chairman of the faculty at Tanglewood from 1985 to 1997. Mr. Kalish is a distinguished professor and head of performance activities at the State University of New York at Stony Brook.

For reservations and to purchase tickets, call 845-758-7900 or visit www.fishercenter.bard.edu.

Benefit tickets, for patrons who wish to purchase tickets that include a tax-deductible donation to the scholarship fund of The Bard College Conservatory of Music, are also available at $40, $60, and $80 ($15, $20, and $25 of each ticket is tax deductible), call 845-758-7900 or visit www.fishercenter.bard.edu. The Conservatory is an innovative double-degree program that is guided by the principle that musicians should be broadly educated in the liberal arts and sciences to achieve their greatest potential. For benefit tickets to the buffet supper with the artists that follows the recital, please call the Conservatory’s development office at 845-758-7866.

About the Bard College Conservatory of Music Building on its distinguished history in the arts and education, Bard College has launched The Bard College Conservatory of Music, which welcomed its first class in August 2005. This innovative, double-degree program is guided by the principle that musicians should be broadly educated in the liberal arts and sciences to achieve their greatest potential. While training and studying for the bachelor of music degree with world-class musicians and teachers and performing in state-of-the art facilities, such as the new Frank Gehry–designed Richard B. Fisher Center for the Performing Arts, Conservatory students pursue a bachelor of arts degree at Bard, one of the nation’s leading liberal arts colleges. The Conservatory also includes the Graduate Program in Vocal Arts, directed by Dawn Upshaw, and The Conductors Institute and its graduate program in conducting, directed by Harold Farberman. For more information about The Bard College Conservatory of Music, call 845-758-7196, e-mail conservatory@bard.edu, or log onto the program’s website, www.bard.edu/conservatory.