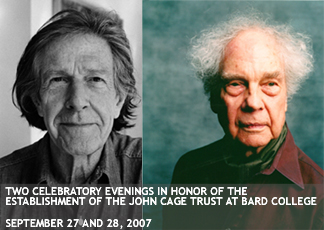 ANNANDALE-ON-HUDSON, N.Y.—In honor of the permanent placement of the John Cage Trust at Bard College, the Richard B. Fisher Center for the Performing Arts presents two celebratory evenings of music, organized in conjunction with the residency of Merce Cunningham, Cage’s longtime partner and collaborator, and the Merce Cunningham Dance Company (MCDC) at Dia:Beacon.

Lecture on the Weather, a 1975 collaborative multimedia stage work composed by John Cage in collaboration with Maryanne Amacher and Luis Frangella, was commissioned by the Canadian Broadcast Company in observance of the American bicentennial. Based on the texts of Henry David Thoreau, it is scored for 12 speaker-vocalists or -instrumentalists, sound recordings, and film. The staging at Bard on Friday, September 28, includes poet John Ashbery; Leon Botstein, president of Bard College; choreographer and dancer Merce Cunningham; dancer Sage Fuller Cowles; artist Jasper Johns; performance artist John Kelly; Kevin Klose, president of National Public Radio; Garry Kvistad, musician and founder of Woodstock Percussion; composer and director Mikel Rouse; essayist and novelist John Ralston Saul, and musicians from The Bard College Conservatory of Music and Music Program. The program begins at 8:00 p.m. in the Sosnoff Theater of the Fisher Center. Tickets are $35, 25, 15.

For further information and tickets, call 845-758-7900, e-mail [email protected], or visit www.fishercenter.bard.edu. Special support for these events has been made possible by The New York State Music Fund.

As part of a two-year residency at Dia:Beacon, Merce Cunningham will choreograph a number of his signature site-specific Events within the vast spaces of Dia:Beacon. Known throughout his career for his collaborations with both visual artists and composers—most notably John Cage—Merce Cunningham’s new works will be presented in distinct galleries at Dia:Beacon, coupled with live presentation of specially developed scores. Family Day, on Sunday, September 30, from 12:00 to 1:30 p.m., (capacity is limited; children 6+ only must be accompanied by an adult), followed by performance of Beacon Event in the Andy Warhol Shadows gallery from 3:00 to 4:00 p.m. MCDC Events are free with admission to Dia:Beacon. For information, call 845-440-0100 or visit diaart.org.

About Merce Cunningham
Merce Cunningham, born in Centralia, Washington, received his first formal dance and theater training at the Cornish School (now Cornish College of the Arts) in Seattle. From 1939 to 1945, he was a soloist in the company of Martha Graham. He presented his first New York solo concert with John Cage in April 1944. Merce Cunningham Dance Company (MCDC) was formed at Black Mountain College in the summer of 1953. Since that time Cunningham has choreographed nearly 200 works for his company. His work has also been presented by New York City Ballet, the Ballet of the Paris Opéra, American Ballet Theatre, Boston Ballet, White Oak Dance Project, Pacific Northwest Ballet, Pennsylvania Ballet, Zurich Ballet, and Rambert Dance Company (London), among others. The MCDC is a group of fourteen dancers (seven women, seven men) who perform the works of Merce Cunningham, choreographer and artistic director, with the collaboration of contemporary musicians and visual artists. The activities of the company are supported by the Cunningham Dance Foundation and by the generosity of government bodies, foundations, corporations, and individual donors.

John Cage was born in Los Angeles in 1912. He studied with Richard Buhlig, Henry Cowell, Adolph Weiss, and Arnold Schoenberg. In 1938 he began working as an accompanist for dance and a teacher at the Cornish School of the Arts in Seattle, Washington. It was here that he first met the dancer Merce Cunningham, with whom he would have a lifelong working relationship. Together they were responsible for a number of radical innovations in musical and choreographic compositions, such as the use of chance operations and the independence of dance and music. Cage was musical adviser for the Merce Cunningham Dance Company until his death in New York City on August 12, 1992.

In the 1940s, Cage moved to New York and joined a group of avant-garde artists, including Cunningham, and painters Robert Rauschenberg and Jasper Johns. During this period, Cage became interested in Eastern religions, particularly Zen, and while his compositions continued his use of carefully structured segments of time, he began to fill them in with materials derived by chance processes (the rolling of dice, the use of the I Ching, and other methods). In perhaps the ultimate statement of this aesthetic, he wrote 4’33’, a piece of total silence on the part of the performer into which the random sounds of the world enter. In 1952, at Black Mountain College, he presented a theatrical event considered by many to have been the first “Happening.” In 1958, Johns, Rauschenberg, and Emile de Antonio organized a 25-year retrospective concert of Cage’s music at Town Hall in New York.

Cage was the recipient of many awards and honors, beginning in 1949 with a Guggenheim Fellowship and an award from the National Academy of Arts and Letters for having extended the boundaries of music through his work with percussion orchestra and his invention, in 1940, of the prepared piano. He was awarded membership in the American Academy of Arts and Sciences (1978), American Academy of Arts and Letters (1989); named Commandeur de l’Ordre des Arts et des Lettres by the French Legion d’Honneur (1982), laureate of the Kyoto Prize given by the Inamori Foundation (1989); and recipient of an honorary doctorate in performing arts the California Institute of the Arts (1986). Cage was the Charles Eliot Norton Professor of Poetry at Harvard University for the academic year.

Cage is the author of Silence, A Year from Monday, M, Empty Words, and X (all published by the Wesleyan University Press). I-VI (the Charles Eliot Norton Lectures delivered at Harvard and published by Harvard University Press) includes transcripts of the question-and-answer periods that followed each lecture, and an audiocassette of Cage reading one of the six lectures. Conversations with Cage, a book-length composition of excerpts from interviews by Richard Kostelanetz, was published in 1988 by Limelight Editions. Cage’s music is published by the Henmar Press of C. F. Peters Corporation and has been recorded on many labels.

Since 1958, many of Cage’s scores have been exhibited in galleries and museums. In 1990, a series of 52 watercolors, the New River Watercolors, executed by Cage at the Miles C. Horton Center at the Virginia Polytechnic Institute and State University, was shown at the Phillips Collection in Washington, D.C., Cage/Cunningham, a documentary film on the collaboration of Merce Cunningham and John Cage, partly funded by PBS, directed by Elliot Caplan, was produced in 1991 by the Cunningham Dance Foundation.

About the John Cage Trust at Bard College
When John Cage died, all of his holdings passed to his longtime friend and collaborator, the dancer and choreographer Merce Cunningham. The John Cage Trust (JCT) was legally formed shortly thereafter, with a board of directors consisting of Cunningham, Anne d’Harnoncourt (director of the Philadelphia Museum of Art), David Vaughan (archivist at the Cunningham Dance Foundation), and Laura Kuhn (who had been Cage’s assistant since 1986). The primary functions of the JCT are to control, monitor, and administer rights and licenses to Cage’s published and unpublished work, and to create and encourage educational experiences through new recordings, performances, workshops, festivals, and more.

Laura Kuhn, in addition to operating and maintaining The John Cage Trust at Bard College, will hold the position of John Cage Professor of Performance Arts at Bard and teach courses at both undergraduate and graduate levels.