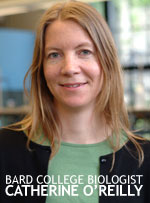 ANNANDALE-ON-HUDSON, N.Y.— Bard College biologist Catherine O’Reilly is one of the many leading scientists whose work for the Intergovernmental Panel on Climate Change (IPCC), was recognized with this year’s Nobel Peace Prize. The Norwegian Nobel Committee announced Friday that the 2007 Nobel Peace Prize will be awarded to both the Intergovernmental Panel on Climate Change (IPCC) and former Vice President Al Gore “for their efforts to build up and disseminate greater knowledge about man-made climate change, and to lay the foundations for the measures that are needed to counteract such change.” O’Reilly, assistant professor of biology at Bard College and a freshwater ecology specialist, contributed to a section in the IPCC’s Working Group II report, “Impacts, Adaptation and Vulnerability,” which was released this past April. She summarized research on the impact of climate change on freshwater environments, reporting strong evidence that recent climate changes, particularly increases in temperature, are having a substantial impact on lakes and rivers around the world.

“I’m very proud to have been one of the many scientists who have participated in the IPCC’s work, and it is extremely gratifying to see that work being recognized by the Nobel Committee for its significance to society,” O’Reilly said, stressing she hopes the Nobel Prize will lead to greater public awareness of the implications of climate change. “The 2007 report by the IPCC illustrates the potential for climate change to affect world peace through changes in things such as water availability, food production, and exposure to disease.”

The Working Group II report was the second of three Climate Change 2007 reports, which aimed to provide a comprehensive and up-to-date assessment of current knowledge on climate change. The Working Group II report gathered leading scientists to assess the vulnerability of socioeconomic and natural systems to climate change, the negative and positive consequences of climate change, and options for adapting to it. Whereas IPCC’s first working group focused on climate-related changes, Working Group II examines more than 30 years of research on how these climate changes have already affected lakes, oceans, forests, and animal and plant species. When the report was released in April, O’Reilly commented, “Lakes and rivers around the world are warming, and, while the responses have been complex and depend highly on geographic location, the research shows that temperature increases are having an impact on the abundance, productivity, distribution, and migration patterns of many freshwater species.” Among her conclusions, O’Reilly noted that increasing temperatures have caused changes in many lakes and rivers that have affected fish species. These changes have consequences for people who depend on these natural systems as a food supply, particularly in developing countries where fishing may be an important source of protein.

Catherine O’Reilly is an assistant professor of biology at Bard College. Her research interests include aquatic ecology, biogeochemical cycles, and environmental science. Her work on climate change in East Africa has been published in the scientific journal Nature and was featured on PBS and on Public Radio International’s Living on Earth program. Her work has been supported by grants and fellowships from the National Science Foundation, Collins Fund, and Water Resources Institute, among others. She is a member of the American Society for Limnology and Oceanography, North American Benthological Society, and American Geophysical Union. She earned a B.A. from Carleton College and a Ph.D. from the University of Arizona.

Recognizing the problem of potential global climate change, the World Meteorological Organization (WMO) and the United Nations Environment Programme (UNEP) established the Intergovernmental Panel on Climate Change (IPCC) in 1988. It is open to all members of the UN and WMO. The role of the IPCC is to assess—on a comprehensive, objective, and transparent basis—the scientific, technical, and socioeconomic information relevant to understanding the scientific risk of human-induced climate change, its potential impacts, and options for adaptation and mitigation. The IPCC does not carry out research or monitor climate-related data or other relevant parameters. It bases its assessment mainly on peer-reviewed and published scientific/technical literature.