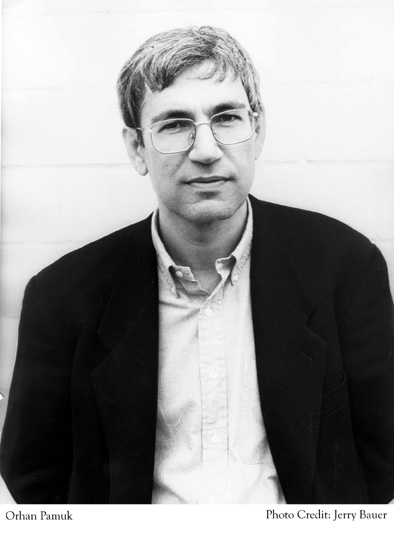 ANNANDALE-ON-HUDSON, N.Y.—Internationally acclaimed Turkish author Orhan Pamuk, the winner of the Nobel Prize in Literature for 2006 and writer in residence at Bard, gives a public lecture, “In Kars and Frankfurt,” on Tuesday, November 13, at 7:00 p.m. in Olin Hall and teaches an open class on Tuesday, November 20, at 1:30 p.m. in room 115 of the Olin Language Center. These presentations, free and open to the public, are part of Norman Manea’s 2007 fall series “Contemporary Masters,” which offers Bard students and the public the opportunity to meet, debate and converse with some of the greatest world contemporary writers.

“Focusing often on the tension between Western culture and Eastern, Islamic culture,” said noted exiled Romanian writer Norman Manea, Francis Flournoy Professor in European Culture and writer in residence at Bard College, “Orhan Pamuk doesn’t only reveal challenging and complex issues of both environments, but illuminates with elegance, acuity, profundity some of the essential and disturbing aspects of our modern, global world and the old-new themes of human destiny: love and faith, beauty and crime, ideals and betrayal, solitude and solidarity. He never lets the political-social drive of his work take over the aesthetic, literary originality of the writing. It’s therefore an excellent opportunity for our students and for the entire community to encounter and converse with a writer of such stature.”

In its Nobel citation, the Swedish Academy emphasized that “In the quest for the melancholic soul of his native city, Pamuk has discovered symbols of the clash and interlacing of cultures.” Of Pamuk’s recently released collection of essays Other Colors, Pico Iyer writes in the New York Times Book Review, “What this collection gives us, by swiveling the lens from the window out toward the Bosporus to the man taking it in, is a chance to savor one of the inimitable literary storytellers of our time, who—to borrow a phrase from Marilynne Robinson’s novel Housekeeping—is set upon a “resurrection of the ordinary.” One of Europe’s most prominent novelists, Pamuk is also the author of Snow, which Margaret Atwood has called “not only an engrossing feat of tale-spinning, but essential reading for our times”; My Name is Red (which won the 2003 IMPAC Dublin Literary Award); Silent House; The White Castle; The New Life; The Black Book; and Mr. Cevdet and His Sons. His work has been translated into more than 50 languages. Pamuk lives in Istanbul.

In Turkey, Pamuk has a reputation as a social commentator even though he sees himself as principally a fiction writer with no political agenda. He was the first author in the Muslim world to publicly condemn the fatwa against Salman Rushdie. He took a stand for his Turkish colleague Yasar Kemal when Kemal was put on trial in 1995. Pamuk himself was charged after having mentioned, in a Swiss newspaper, that 30,000 Kurds and one million Armenians were killed in Turkey. The charge aroused widespread international protest. It has subsequently been dropped.

All events are free and open to the public. No reservations are necessary; seating is on a first-come, first-seated basis. For further information, call 845-758-7439.